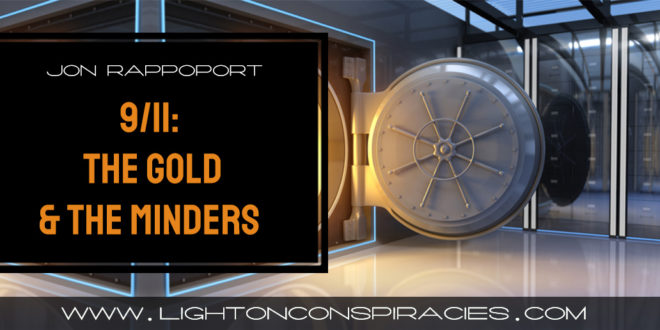 Searching through the archive of my past articles, I’ve come up with two 9/11 stories that have been largely ignored—left to gather dust as they fade from memory. Here they are:

Flashback: 9/11 and the gold in the NY Federal Reserve

With reports that Germany can’t get back much of its gold stored in the NY Federal Reserve, I remembered what I was writing just after 9/11.

“Still no word on the condition of the NY Federal Reserve Bank, which is 2.5 blocks away from the destroyed WTC. This bank, underground, holds $75 billion in gold from [about five] dozen countries.”

“CNN has a large map posted today, which shows the condition of a number of buildings by name in the area, but, curiously, the NY Fed Reserve is not one of them.”

“And now that workers are going down underneath the remains of the WTC, where $100 million in gold is admittedly stored (Reuters), we have no word on the condition of that gold, either.”

“Yesterday, I brought up the issue of the gigantic fed gold reserve stashed underground 2.5 blocks from the WTC. And mentioned that no press accounts were covering damage to nearby buildings. Which I find odd.”

“Here is an account from [a reader] on the ground in NYC, as of an hour ago. ‘It seems like we are getting the same limited [TV] shot on all networks…kind of a tight angle shot of damage of the base of the towers…no shots of damage to nearby buildings, including the gold reserve building. No one knows anything because the whole island [of Manhattan] has been shut down below 14th St. Camera crews not allowed to wander. If you live below 14th St. and you leave your apartment you need identification in order to get back in.’”

“The WTC took up several blocks in lower Manhattan. From the Liberty Street side, it is about 2 blocks to the Fed Reserve Bank of NY, at 33 Liberty St. Under the Bank, 5 levels down, in bedrock, is the $75 billion in gold.”

“The NY Federal Reserve keeps a facility for storing gold in NYC. It handles the gold reserves of about five dozen countries. $75 billion in a vault. About 1/4 of the world’s gold supply. At least, that’s the Fed Reserve press release on this, from 1999. This vault is located close to the WTC, where the towers fell. Is it [the vault] buried? Is the vault open? Anyone see Die Hard 3? A gigantic terrorist ‘diversion’ leading to the theft of all the gold in the vault.”

In the days following 9/11, I also wrote that there were no reports or video of troops guarding the NY Federal Reserve building. This was very curious. 75 billion in gold and no troops present? Nor have I found any video from that time, later posted on YouTube, showing troops around the Fed Reserve.

There is debate about whether a tunnel existed connecting the basement of the old WTC and the basement of the Federal Reserve. A 2010 piece at Cryptome indicates (with photos) that, during the post-9/11 WTC cleanup, an old railroad tunnel between the WTC and Fed Reserve basements was uncovered. (Diehard 3 featured such a tunnel and track.)

Was the Fed Reserve gold taken away after 9/11?

Or had it been taken before 9/11? Perhaps long before.

Clearly, in the immediate wake of 9/11, there was a concerted press effort to omit or limit mention of the Federal Reserve building.

On March 2, 2013, Tyler Durden, writing at zerohedge.com, in Why Is JPMorgan’s Gold Vault, The Largest In The World, Located Next To The New York Fed’s?, reported his finding that “the de facto largest private gold vault in the world [is] located across the street [from the NY Federal Reserve building] 90 feet below 1 Chase Manhattan Plaza.”

This private vault, at the same level as the NY Fed Reserve vault, could front right up against it.

The private vault belongs to JP Morgan Chase. It is larger than a football field.

Under circumstances deemed “essential,” it would appear to be easy to transfer an enormous amount of gold from the Fed Reserve to JP Morgan Chase.

Silverdoctors.com reports that a US Treasury Dept. audit of all US gold reserves inadvertently exposed a total figure of 466 tons, far less than previous claims of 8,133 tons.

Anyone trusting that US-held gold reserves are safe and sound needs to examine his own head.

HERE IS THE SECOND STORY—Intimidation of 9/11 Commission witnesses: the “minders”

Let’s say you work for a large corporation, which is undertaking an internal investigation of possible corruption and fraud within the company.

You’re sitting in a room, and an employee of the company is interviewing you.

But next to you sits your boss. He hears all the questions, and he hears your answers. He takes notes on the interview. He answers questions you are supposed to answer. He is your “minder.”

On October 2, 2003, during the 9/11 Commission investigation into what happened on September 11, 2001, a memo was sent to two Commission attorneys, Daniel Marcus and Steven Dunne. It was ominously titled:

The memo was written by members of the 9/11 Commission’s Team 2: Kevin Scheid, Lorry Fenner, and Gordon Lederman. There is no indication that any official subsequently acted on their highly serious charges:

“When we have asked witnesses [in interviews] about certain roles and responsibilities within the intelligence community, minders [in the room] have preempted witnesses’ responses by referencing formal policies and procedures. As a result, witnesses have not responded to our questions and have deprived us from understanding the intelligence community’s actual functioning and witnesses’ view of their roles and responsibilities.”

“[M]inders have positioned themselves physically and have conducted themselves in a manner that we believe intimidates witnesses from giving full and candid responses to our questions. Minders generally have sat next to witnesses at the table and across from Commission staff, [falsely] conveying to witnesses that minders are participants in interviews and are of equal status to witnesses.”

“[Minders now and then] answer questions directed at witnesses.”

“[Minders write] verbatim notes of witnesses’ statements [which] conveys to witnesses that their superiors will review their statements and may engage in retribution.”

“[T]he net effect of minders’ conduct, whether intentionally or not, is to intimidate witnesses and to interfere with witnesses providing full and candid responses.”

Take it even further. This Commission “minder procedure” would be analogous to you sitting in the witness box at a criminal trial of a mob boss. You’re testifying for the prosecution against the boss. But in the box, next to you, sits a mob assassin.

So you say: “I may have implied I was there on the night the defendant was planning…whatever it was. But I didn’t really say that. I was misinterpreted. I don’t recall being there. I’ve never met the defendant. I’m a retired investor living on a pension. I’m receiving treatment for early-onset dementia…”

Granted, the 9/11 Commission interviewers were certainly asking superficial questions of witnesses from the get-go. But if a government witness by chance saw something or heard something or knew something that would have exploded the official 9/11 story, with his minder there he was in a straitjacket.

And he’ll stay in a straitjacket.

Share
Previous Israeli Prime Minister Benjamin Netanyahu to be indicted on corruption charges
Next Penn State Prof: Social Credit Will Shift Law In The West “From Constitution… To Analytics And Algorithm”