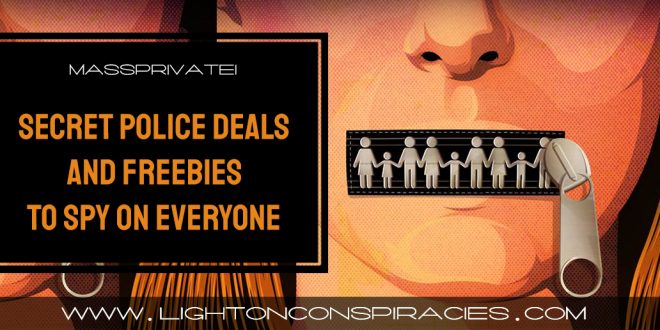 Amazon and Google are using secret police agreements and free giveaways to spy on everyone.

Ring doorbell cameras will be provided to the public free of charge, according to a published agreement between the Lakeland Police Department in Florida and Amazon. Law enforcement’s relationship with Amazon is so close, they have agreed to work with Ring to coordinate on all public communications.

“The parties shall agree to a joint press release to be mutually agreed upon by the parties,” the memorandum of understanding says.

Want to find out if your neighbors are using Ring to spy on people of color or create a secret watchlist? Don’t ask the police because they will have nothing bad to say about Ring doorbell cameras.

Amazon and law enforcement are enti

A recent CNET article revealed that at least 50 police departments have given away Ring doorbells or used taxpayer dollars to purchase them,

Police departments across the country, from major cities like Houston to towns with fewer than 30,000 people, have offered free or discounted Ring doorbells to citizens, sometimes using taxpayer funds to pay for Amazon’s products.

An article in today’s Vice News claims that at least 200 police departments have partnered with Amazon,

At least 200 law enforcement agencies around the country have entered into partnerships with Amazon’s home surveillance company Ring.

Which is exactly what I warned people about last year when I wrote two articles describing Ring’s plan to help law enforcement create secret surveillance/watchlist networks.

An article in last year’s BusinessWire did a fantastic job of revealing what Ring’s mission really is,

Ring, a company on a mission to reduce crime in neighborhoods, today launched the Neighbors app on iOS and Android to provide every neighbor with real-time, local crime and safety information. Police and sheriff’s departments throughout the U.S. are also joining the network as a new way to share real-time crime and safety alerts with their communities.

Sometimes the truth is stranger than fiction as the New York Times revealed,

Amazon said that it was working with Realogy, the nation’s largest residential real estate brokerage company and owner of Century 21, Coldwell Banker and other brands, to create TurnKey, a service that will help prospective home buyers find real estate agents. To entice customers, Amazon will give buyers up to $5,000 in home services and smart-home gear when they close.

Amazon is essentially offering first-time home buyers $5,000 worth of surveillance devices so they can monitor everything they do.

This changed when the Christopher & Dana Reeve Foundation and Google Nest started a project to understand how technology can benefit people living with paralysis. Google Nest is providing up to 100,000 Google Home Minis to help them.

It does such a good job at masking the reality of what Google listening devices do, you almost want to thank Google for being so nice.

Corporations act as though they care about public safety or handicapped people while secretly using their products to build a massive database on everyone.

Amazon, Google and Apple are all spying on what goes on inside people’s homes and perhaps nothing says that better than a recent story in the UK Guardian that revealed how private contractors use Siri to spy on people having sex.

There have been countless instances of recordings featuring private discussions between doctors and patients, business deals, seemingly criminal dealings, sexual encounters and so on. These recordings are accompanied by user data showing location, contact details, and app data.

These device should be re-named corporate law enforcement surveillance devices to reflect what they really are. Sometimes corporations come up with clever ways to hide the fact that their products are designed to spy on everyone, and sometimes they almost seem to care about the public.

Unfortunately this is not one of those times.