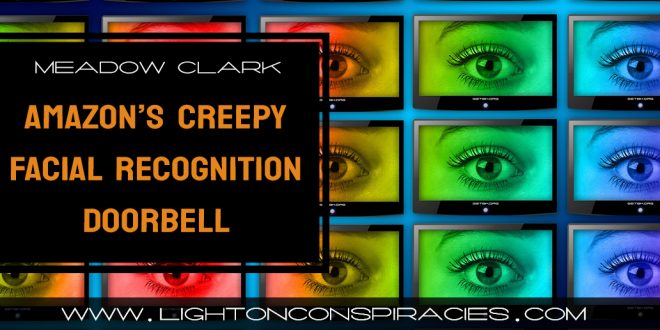 At first glance of Amazon’s new patent application, one would be tempted to think it no more than a built-in “smart” security system.

But no, this facial recognition surveillance doorbell does a lot more than record would-be thieves.

According to a new report, the patent application, made available in late November, would pair facial surveillance such as Rekognition, the product that Amazon is aggressively marketing to law enforcement, with Ring – a doorbell camera company that Amazon acquired in 2018.

Yeah, that’s one way of putting it. Here’s another:

Amazon is dreaming of a dangerous future, with its technology at the center of a massive decentralized surveillance network, running real-time facial recognition on members of the public using cameras installed in people’s doorbells. – Jacob Snow, ACLU

Wow. Do you feel safer yet?

This tech isn’t really there to protect your house or neighborhood.

It’s going to record all who walk by and gather composite images and recordings that can be stored in the Cloud and accessed by law enforcement to help surveil and catch suspects.

One of the main problems – besides the obvious privacy violations and smashing the 4th Amendment to smithereens – is that facial recognition has been abysmal so far. That means if a database determines you are a suspect because you bear a striking resemblance, then the police could show up and detain you before you even drop off the potato salad to your next potluck.

While the details are sketchy, the application describes a system that the police can use to match the faces of people walking by a doorbell camera with a photo database of persons they deem “suspicious.” Likewise, homeowners can also add photos of “suspicious” people into the system and then the doorbell’s facial recognition program will scan anyone passing their home. In either case, if a match occurs, the person’s face can be automatically sent to law enforcement, and the police could arrive in minutes.

The application describes creating a database of suspicious persons. Unwanted visitors would be added to the list when a homeowner tags them as not authorized. Other people could be added to the database because they are a convicted felon or registered sex offender, according to the application. Residents may also alert neighbors of a suspicious person’s presence.
But some people, such as a mail courier, could be placed on an authorized persons list. Postal service logos could be used to help identify them.

Putting people on a naughty list? Wait, doesn’t that all sound eerily similar to the social credit system rolled out in China?

“The patent describes the neighborhood surveillance system as an opt-in service,” CNN adds.

But really, it is not possible to opt out of broad brushstroke surveillance. How can I opt out of my neighbor (and Amazon, and the government) storing everything about me in the Cloud? What if my neighbor hates that my tree branch hangs over their fence? Will I go on their suspicious persons list?

“As a former patent litigator, I’ve spent a lot of time reading patents. It’s rare for patent applications to lay out, in such nightmarish detail, the world a company wants to bring about,” writes Jacob Snow in a recent ACLU report on the newest invasive technology by the company that only 10 years ago just sold…books. Is Justice blind or prejudiced?

He adds, “this technology puts activists and protesters in danger when exercising their First Amendment rights.”

Tests from the ACLU showed that facial recognition doesn’t correctly identify people and this leaves the door wide open to let A.I. do the justice. That means innocent people could be filling up the privatized prison system.

The ACLU tested the software, and…

The ACLU tested the Rekognition software and proved that it incorrectly identified members of Congress as common criminals. Yes, the irony would be giggle-inducing in a John Oliver segment, but not so much for the innocent person serving life in prison.

This glaring inaccuracy prompted Amazon shareholders to urge the company to stop selling this tech to law enforcement. The recent patent application serves as a flippant disregard for that plea.

“The application also undercuts Amazon’s own purported defense of its face surveillance product. The company has told the public that biometrics should only be used by law enforcement as an aid, not a replacement, to human judgment. But Amazon’s patent application is pushing the technology toward automation, removing human judgment from the identification process, and instead potentially relying on data, like arrest photos, that itself is a record of racially discriminatory policing,” says Snow.

The ACLU notes that facial recognition is even less accurate for darker-skinned people and that this technology paves the way for harassment and wrongful action against the formerly incarcerated. But for activists, too.

Here is a figure of the doorbell and the surveillance scope. Check out the rest of the patent application HERE: That’s Not All, Folks!

Snow warns that the patent makes it painfully clear that this surveillance tech will not be limited to doorbells or homes.

Any complementary audio or visual device – Cough! Echo! Cough! – can be set up for biometric scanning.

Amazon is expecting to target a bevy of other biometrics such as:

In addition, the surveillance tech could even include recognition based on behavioral characteristics, like:

Imagine a doorbell – or in-home device – that can do all that.

Do we even know each other as well as Amazon will know us?

We always knew the government had boundary issues but this is just TMI – too much intimacy.

A lot of people are comfy and cozy with the idea that they are being watched all the time, like the people lining up to be scanned at the airport to save two seconds of their time.

For me, being watched under a microscope by my government makes every nerve of my being burn with the fire of a thousand hells with the added dread that there is not one minute of reprieve, nor any identity of my own except to be an eyeballed object of the all mighty, omnipresent State.

You can’t escape this recognition tech.

If you go to someone’s house, you’ll be on the digital record.

Imagine if a neighborhood was set up with these doorbell cameras. Simply walking up to a friend’s house could result in your face, your fingerprint, or your voice being flagged as “suspicious” and delivered to a government database without your knowledge or consent. With Amazon selling the devices, operating the servers, and pushing the technology on law enforcement, the company is building all the pieces of a surveillance network, reaching from the government all the way to our front doors.

Like I said before when I wrote about biometrics at the Atlanta International airport: it’s nearly impossible to avoid facial recognition technology today.

Yet, we do still have control over how we spend our money, our voice, and with whom we spend our time. It’s not much control in the grand scheme of things but if we rise up and fight this, our great grandchildren will honor us.

That is, if they will even understand the concept of privacy by the time they get here…

What do you think of all this?

It seems like every day I stumble across a new piece of creepy tech that someone wants to add to our everyday lives under the guise of “convenience” and “safety.” How will you avoid getting caught in the net? Are you creeped out by this stuff?

You can read more from Meadow Clark at The Organic Prepper.