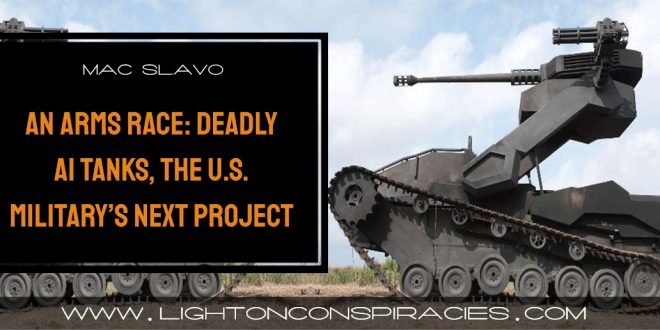 The United States military is going to attempt to build deadly artificial intelligence-driven tanks.  Dubbed Project ATLAS, this type of tank would lead to the first autonomous ground combat vehicles.

According to Quartz, the Advanced Targeting and Lethality Automated System (ATLAS) would theoretically give a tank the ability to do everything necessary to take down a target except pull the trigger. A human operator will still need to actually fire the weapon that will kill another human being. The United States Army has already called on experts in the field to help it develop this deadly technology. Eventually, it will allow a ground combat vehicle such as a tank to automatically detect, target, and engage enemy combatants – without the risk of the operator losing their life.

The U.S., with support from contractors like Boeing, has continued to develop AI-powered military technology even though some 26 countries have banned autonomous weapons development.  The U.S. Army, on the other hand, has the goal of automating the battlefield in order to make combat and war more efficient. For now, human operators are still required by law to be the ones making the final decision to fire.  “It looks very much as if we are heading into an arms race where the current ban on full lethal autonomy will be dropped as soon as it’s politically convenient to do so,” University of California Berkeley computer scientist Stuart Russell told Quartz.

“Anytime you can shave off even fractions of a second, that’s valuable,” Paul Scharre, program director at a national security think tank called the Center for New American Security, told Quartz according to Futurism. “A lot of engagement decisions in warfare are very compressed in time. If you’re in a tank and you see the enemy’s tank, they probably can also see you. And if you’re in range to hit them, they’re probably in range to hit you.”

The United States Army has also already demoed an F-16 that flies and executes strikes all by itself. Humans have begun the fast process of removing what it means to be a human from society.

Share
Previous Why Is The Deep State Promoting Black Panther At The Oscars?
Next Scientists Want Orwellian A.I. Sentient Smart Assistants To Snitch On Owners And Discuss Contacting Police