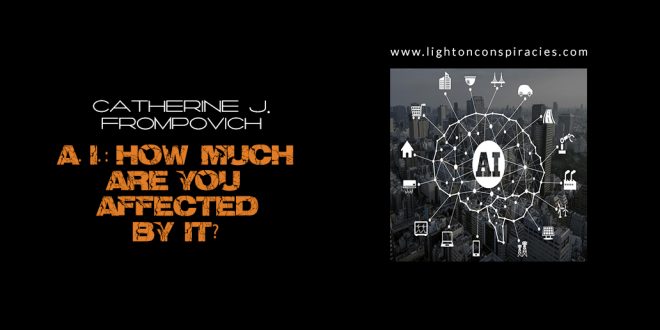 Artificial Intelligence: How Much Are You Affected By It?

Artificial Intelligence: How Much Are You Affected By It?

Have you ever wondered what AI or Artificial Intelligenceis all about?  It’s the deliberate reprogramming of the human race to think and to act according to controllers who want to have absolute control over every aspect of our abilities to think and to act other than the way they approve and program us to act!  Is that happening already with some of the counter-culture crimes in order to steer humans into a ‘mental slave corral’?

Following are excerpts taken from the source link below, which indicates certain aspects of where the NWO controllers are directing the future of humankind into becoming technological slaves to Artificial Intelligence, which most tech-addicted humans are not aware of, in my opinion.

CG are the initials for Corey Goode, a person who worked with high tech and had extremely highly classified credentials, as I understand, which included interactions with extraterrestrial beings of higher intelligence than we, who are working with the U.S. tech companies and government agencies on ET projects.

Corey decided to share what he knows with others through the work of David Wilcock, an investigator working in the fields of paranormal and ET exposure and contact.

Even though the information may seem totally off the wall, however, to those of us who have been ‘tracking’ this stuff as much as is possible due to secrecy and highly classified information, what Corey talks about in the various discussions with David Wilcock ought to make one stop and wonder about the ‘seeding’ of  high technology devices.

Are they what eventually will become part and parcel of a program to take over the human race and have us surrender our Creator-God-given sovereignty [1] to their Artificial Intelligence and Transhumanism programs, which have been in the works ever since the end of World War II (1945) when the U.S. government, working under Project Paperclip, “exonerated” Adolph Hitler’s scientists and brought them to the USA to work on creating the same ‘stuff’ for the United States!

That ‘Hitlerian-era’ work progressed further than one could have imagined since it apparently intermingled with, and even may have overlapped with, the plans of the New World Order cabal for a one world order government, religion, monetary system and ultimate control of all entities as has been put forth in the United Nations Agenda 21 and 2030.

Here’s what Corey Goode has to say about how humans probably have been programmed into submission using a directed or manufactured belief and reality system centered in entertainment and addiction, since microwaves, in particular, affect the same centers in the human brain as opioids and other addictive substances [2-3].  Some refer to it as akin to the Hegelian Dialectic,or as David Icke likes to say, “Problem-Reaction-Solution”.

CG: The way the AI prophets see it, the more we’re addicted to technology, the more we love technology, the more in the future we will be willing to hand over our sovereignty to technology. We’re already at a point to where we’re totally dependent on technology, to where if there was an electromagnetic pulse most of us wouldn’t be able to find our way more than a quarter of a mile away from my house anywhere without a GPS. No one can remember more than– I don’t even think anyone remembers their own phone number these days. Everything’s electronically based. This is no accident.

CG: Because they now had a way to have . . . They control the vertical, the horizontal, and the audio in every home in the United States. And people spend so much time in front of the television that television controls our perception of reality. And not only that, now they can use the television and now the internet to brainwash us and change our reality in a way to where we are accepting, without question, what they want us to believe.

This goes for everything– the daily news– and this goes all the way up to eventually when they want us to hand over our sovereignty, possibly to AIs in the future, or just about anything. If it happened on TV, for the majority of people, that’s reality.

CG: No. That’s very real. The television doesn’t even have to be on for it to have an effect on the people in the home. Now, do you think you and I are going to be able to convince people to turn off and unplug their televisions from the wall? People are so addicted to the programming. [Emphases added by CJF]

If all the above sounds a little “too off the wall,”then why, probably, is everyone addicted to tech? Is that really a preprogrammed addiction destined to become a ‘natural’ transhumanism trait for the future?  Will microwaves and the newer generations of microwaves in the high gigahertz ranges become the ultimate in control mechanisms?

I have had NO TV for years; never bought into TV since it became mainstreamed in the 1940s—always thought it was an “idiot box”;and I choose to live as high-tech-freea life as possible: no smart phone, no microwave oven, etc., but I do have a computer to do the work I do in researching and writing.  Furthermore, I don’t use the computer and its social networks, etc. for ‘fun’ time or to network with others, as I came to realize a very long time ago at the start of those online community sites how those were control programs and deliberate trackers and libraries for input to determine future control dictates.

We have come to a point in human evolution where, in my opinion, it’s time to step back and realize just how much of our personal sovereignty has been stolen from us that we even didn’t realize was happening because we willingly gave it up due to our addiction to their ‘smart’ control mechanisms.

In my opinion some of the issues with high tech include:

I probably won’t be around to see the fulfillment of this prediction, but there will come a time—maybe too late—when humans finally wake up to what we allowed to happen to us because of an addiction problem to and with high tech devices.

Currently, we finally realized what’s been happening with opioids and female sexual abuses, then why can’t we see what’s going on to make us into AI androids?

Two of Catherine’s more recent books on Amazon.com are Our Chemical Lives And The Hijacking Of Our DNA, A Probe Into What’s Probably Making Us Sick(2009) and Lord, How Can I Make It Through Grieving My Loss, An Inspirational Guide Through the Grieving Process(2008)

Previous Kriget mot kontanterna
Next To Avoid Mental Problems, Turn Your Phone Off By 10 PM