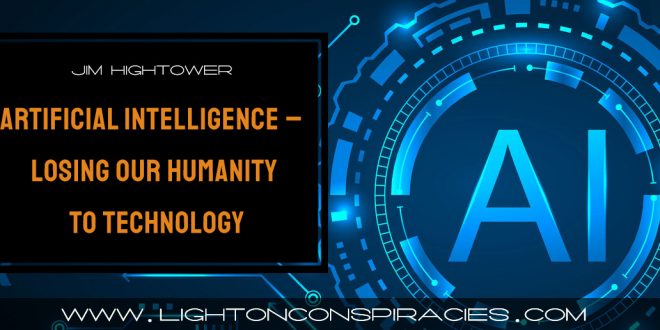 AI Wants to Reprogram You

Driverless cars cost jobs and threaten pedestrians. Investors’ advice? Just get out of the way!

With chaos in the White House, worsening environmental disasters, more wars than we can count, and a wobbling economy here at home, the last thing we need is another big challenge. But — look out! — here comes a doozy!

It’s AI — artificial intelligence — the fast-evolving science of autonomous machines that can think, learn, and even reproduce themselves.

Consider self-driving vehicles. Once the stuff of science fiction, the future is suddenly upon us, with Google, Daimler, and GM rolling out driverless taxis, commercial trucks, and even cars with no steering wheel or gas and brake pedals.

An army of corporate lobbyists is rushing to legislative halls, literally changing the rules of the road to allow full deployment of these vehicles.

What about the hundreds of thousands of professional drivers who’ll lose their jobs? Not our problem, say the financiers and AI barons who’d profit from a mass bot-mobile conversion. Besides, as AI champion David Autor coldly asserts, those drivers get sick, take vacations, etc. “People are messy,” he notes; “machines are straightforward.”

Indeed, so straightforward that these two-ton, non-sentient “drivers” will be driving straight at a world of defenseless pedestrians. Already, one of Uber’s experimental cars killed an Arizona pedestrian last year. We can fix that, says Andrew Ng, a prominent AI investor: They just have to be reprogrammed.

By “they,” Ng doesn’t mean the self-driving machines — he means pedestrians! “Please be lawful,” he scolds, “and please be considerate” of the computer-driven vehicles. Give right-of-way to the new technology!

So, don’t just prepare yourself for A Brave New World of automation. Prepare to be re-educated so you interact properly with machines and don’t get in their way.

Worried About Robots? Just Become One

Tech CEO Elon Musk says artificial intelligence is a big threat to humans, so we should… surgically implant wires in our brains?

We humans have got to get a whole lot smarter, says Elon Musk, the billionaire founder of Tesla automobiles and CEO of SpaceX rockets.

Musk isn’t merely reacting to humanity’s recent tendency to elect lunatics to lead our countries. Rather, he’s warning us about the rapid rise of a radical new technology: artificial intelligence.

In common parlance, he’s referring to robots, but these aren’t the clunky, somewhat cute machines performing rote tasks. AI essentially has evolved to become an electronic brain — a web of evermore-complex super-computers interacting as one cognitive unit that can program itself, make decisions, and act independently of humans.

These thinking machines are rapidly increasing in number and geometrically advancing their IQ, prompting Musk and others to view AI technologies in apocalyptic terms. As algorithms and systems inevitably grow more sophisticated, he says, “digital intelligence will exceed biological intelligence by a substantial margin.”

In graphic terms, Musk warns that profiteering humans are “summoning the devil” by creating a new superior species of beings that will end up dominating humanity, becoming “an immortal dictator from which we would never escape.”

What’s weird isn’t his dystopian prognosis (other experts agree that runaway bot intelligence is a real threat), but his solution. The way for human beings to compete with AI, says Musk, is to merge with it — not a corporate transaction, but a literal merger: Surgically implant AI devices in human brains with “a bunch of tiny wires” that would fuse people with super intelligence.

Uh-huh… and what could go wrong with that?

It’s good to have technological geniuses alert us to looming dangers, but maybe the larger community of humanists ought to lead the search for answers.

This article distributed by OtherWords.org (original posts here and here).

Share
Previous Scientists Explain How Intuition May Be The Highest Form of Intelligence
Next Mongoose: Are Crisis Actors and Freemasons Emergent in the Attack on China and the Global Economy?