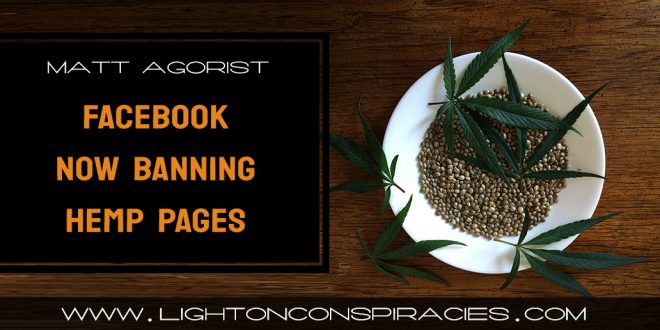 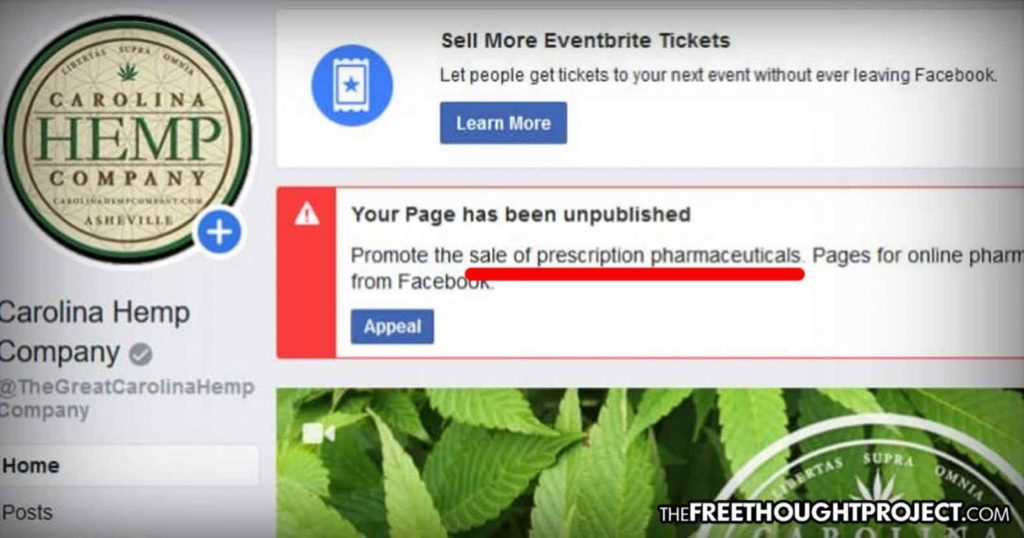 Because government is the antithesis to freedom, industrial hemp has been banned nationwide since 1937 ostensibly due to the plant’s similarities to marijuana. Many have speculated that this move was also due to the fact that cannabis is in direct competition with the pharmaceutical industry by providing far safer alternative treatments as well. However, all this changed this month after President Donald Trump signed the Agriculture Improvement act of 2018, legalizing industrial hemp on a national scale.

Industrial hemp is once again legal in all 50 states but its legalization has set off a new disturbing trend. In a move that appears to be a give away to big pharma, Facebook has begun banning hemp pages.

Just as the farm bill was passed by the House and Senate earlier this month, the page for hemp grower “Franny’s Farmacy” was banned. 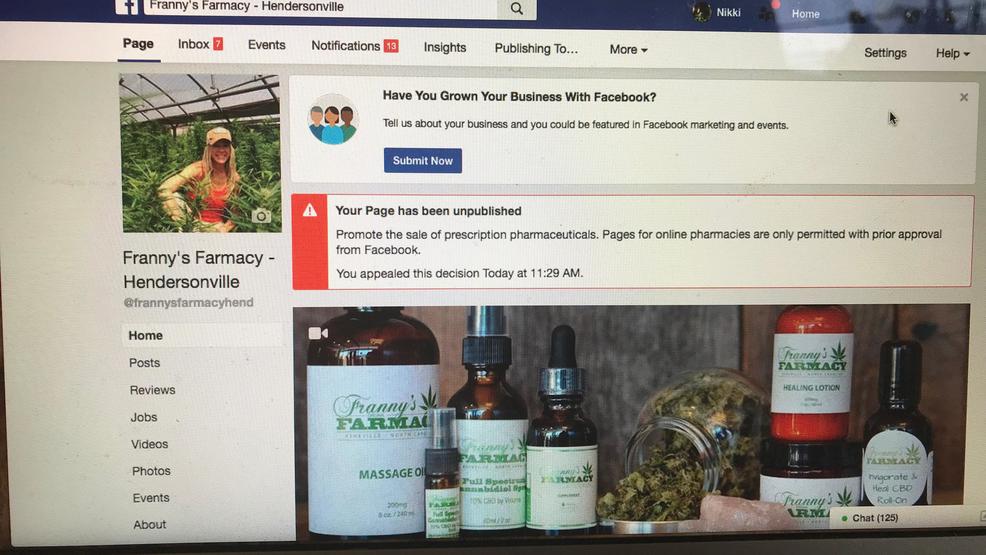 “Being an ex-pharmaceutical rep, there is no way we posted anything that violates Facebook’s terms of service,” says Tacy. “We make no claims, we make no recommendations … but we do use the words hemp and CBD and those seem to be becoming trigger words as well.”

Days after being banned, Franny started a new page which began amassing new followers, but after just four days, it was taken down too. This time, Facebook accused Franny and Jeff Tacy of “encouraging drug use.” They sell no drugs whatsoever. 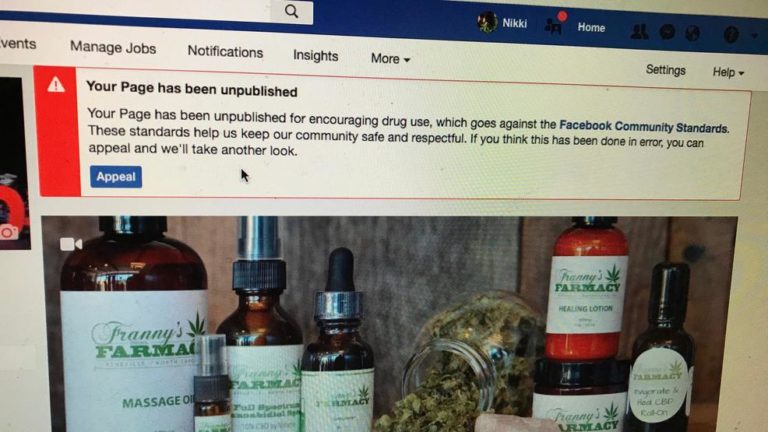 But Franny’s hemp page was not the only victim to Facebook’s give away to the pharmaceutical industry in the name of suppressing the legal sale of hemp. This week, the page for the Carolina Hemp Company was also unpublished. They were given the exact same reason: “promoting the sale of prescription pharmaceuticals.”

Page admin Brian Bullman noted that they have never made any claims which could be interpreted as such. What’s more is the fact that they are a hemp company — not a pharmaceutical company — and they sell no pharmaceuticals at all.


“The stated reason should be of concern,” Bullman wrote. “Our curators do an exceptional job of making sure our content is clean and void of claims. CHC also tends to sell mostly non-isolate products not only due to the superior performance, but also to avoid the possibility of infringing on a pharmaceutical model under the current unfolding conditions as stated by the FDA’S non-binding statement/interpretation.”

Highlighting the sheer insanity of Facebook’s bogus claims is the fact that pages like Pfizer — who actually do promote the use of dangerous pharmaceuticals — are still thriving. For those who may be unaware, Pfizer is the company behind the drug Chantix (prescribed to people to quit smoking) which has been shown by the FDA to have caused thousands of serious injuries and dozens of deaths. Meanwhile, no one in the history of cannabis has ever died from its use.

But Pfizer’s ability to promote deadly drugs on Facebook’s platform — while those who promote hemp are banned — should come as no surprise to those who have been paying attention. As TFTP reported in October, after we were banned, Facebook joined with the Atlantic Council which is directly funded and made up of groups tied to the pharmaceutical industry as well as the military industrial complex, and even government itself.

In fact, Pfizer’s Director for Advocacy and Professional Relations, Mia Masten, is a member.

As Facebook continues to crackdown on folks who promote peace, healthy lifestyles, and sustainable alternatives to deadly medicines, they are showing their true colors — as well as their true masters. To those who don’t know how deep the Atlantic Council’s tentacles reach into all things tyranny, war, and corporatocracy, below is an eye opening short video that explains it.

As TFTP previously reported, in May, after Americans were successfully whipped into a tizzy of Russian hacking and meddling, along with the fake news hysteria, the Americans begging for censorship craze came to a head when Facebook partnered with the Atlantic Council.

Facebook announced that it partnered with the arm of the Council, known as the Digital Forensic Research Lab that was brought on to help the social media behemoth with “real-time insights and updates on emerging threats and disinformation campaigns from around the world.”

Apparently, Free Thought Project was one of those threats and now the hemp industry is too.

Facebook partnered with the Atlantic Council, so what, right? They can do whatever they want and hire outside third parties to help them police the platform they own, right? Yes, this is correct. However, the Atlantic Council is funded by government which makes this move especially insidious.

The Atlantic Council is the group that NATO uses to whitewash wars and foster hatred toward Russia, which in turn allows them to continue to justify themselves. It’s funded by arms manufacturers like Raytheon, Lockheed Martin, and Boeing. It is also funded by billionaire oligarchs like the Ukraine’s Victor Pinchuk and Saudi billionaire Bahaa Hariri.

Is this a private entity? pic.twitter.com/5oGABYjMqz

The Atlantic Council wields massive influence over mainstream media, too, which is why when this partnership was announced, no one in the mainstream press pointed it out as the Orwellian idea that it is. Instead, headlines such as “US think tank’s tiny lab helps Facebook battle fake social media(Reuters)” and “Facebook partners with Atlantic Council to improve election security (The Hill)”were put out to spin the fact that a NATO propaganda arm is now censoring the information Americans see on Facebook.

They have even been caught engaging in the creation of actual fake news, and no one in the mainstream has called them out on it.

As Bryan MacDonald so aptly noted, some of the stuff the Atlantic Council itself gets away with serves to show its power over the mainstream media. For instance, when Ben Nimmo, a one-time NATO press officer, and Atlantic Council board member, himself ludicrously insisted grammar mistakes were “proof” that social media users critical of NATO were paid Kremlin trolls, and later when he smeared a British man by labeling him a Russian bot, the popular press didn’t bother to question whether he was a fit and proper person for Facebook to engage as a censor. Even after the victim appeared on Sky News to prove he was a real person. Thus, what should have been a warning of the dangers of DFR Lab was essentially ignored.

At the time, Nimmo, instead of apologizing, wrote “interesting to see the real face of Ian56789, rather than the David Gandy one, at last (referring to his Twitter avatar). Not a troll factory account. Rather, a pro-Kremlin troll(definition based on [sic] use of someone else’s picture, systematic use of Kremlin narratives, and repetitive abusive behaviour),”

WikiLeaks was the sole voice of reason, and challenged the lobbyist. “You literally produced, with money from weapons companies and dictatorships, a fake news story that spread all over the world, defaming a very British retiree, who wants to reduce arms company profits, as a Kremlin bot,” they wrote. “So who’s the paid troll?”

You literally produced, with money from weapons companies and dictatorships, a fake news story that spread all over the world, defaming a very British retiree, who wants to reduce arms company profits, as a Kremlin bot. So who's the paid troll?

This is the group Facebook is now taking direction from in regard to who is allowed to post information on their platform. The Atlantic Council has been proven to create fake news to slander people who have an antiwar stance in an effort to keep their pro-war weapons companies in the black. It is utter insanity. However, in today’s information war, it is to be expected.

Unless we fight back in the form of sharing information deemed “wrong think” by the censors, this problem will only continue to get worse. We must continue to alert our fellow humans to this censorship before it becomes the norm. We must use this recent purge as our Streisand moment and turn this massive and blatant act of censorship around as a tool to expose the tyrants behind it.