Ole Dammegard joins the show to discuss his book Coup d’etat in Slow Motion. The book investigates the assassination of Swedish Prime Minister Olof Palme in 1986 and reveals the links that event has to other political events like the assassination of John F. Kennedy, Robert F. Kennedy, Martin Luther King, Salvador Allende and John Lennon as well as the sinking of the Estonia, a maritime disaster that took the lives of 852 people in 1994. 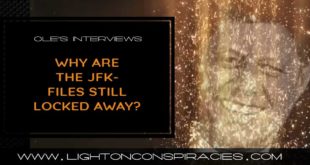