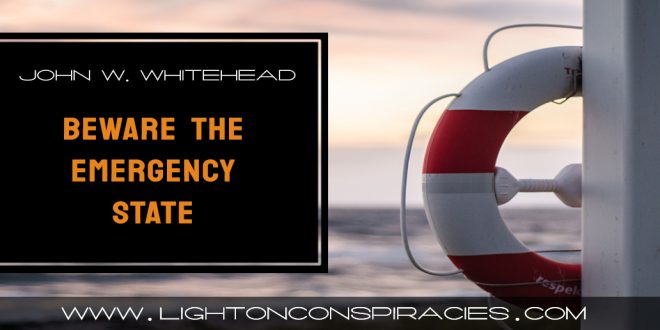 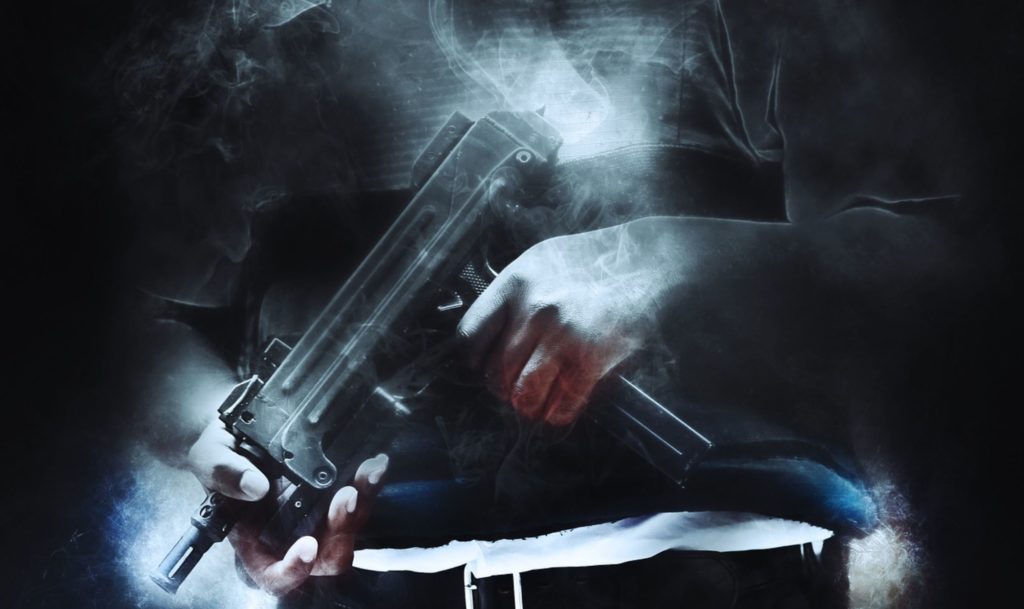 “For seven decades we have been yielding our most basic liberties to a secretive, unaccountable emergency state – a vast but increasingly misdirected complex of national security institutions, reflexes, and beliefs that so define our present world that we forget that there was ever a different America. … Life, liberty, and the pursuit of happiness have given way to permanent crisis management: to policing the planet and fighting preventative wars of ideological containment, usually on terrain chosen by, and favorable to, our enemies. Limited government and constitutional accountability have been shouldered aside by the kind of imperial presidency our constitutional system was explicitly designed to prevent.”— David C. Unger, The Emergency State: America’s Pursuit of Absolute Security at All Costs

It’s all happening according to schedule.

The civil unrest, the national emergencies, “unforeseen economic collapse, loss of functioning political and legal order, purposeful domestic resistance or insurgency, pervasive public health emergencies, and catastrophic natural and human disasters,” the government’s reliance on the armed forces to solve domestic political and social problems, the implicit declaration of martial law packaged as a well-meaning and overriding concern for the nation’s security…

The government has been planning and preparing for such a crisis for years now.

No matter that this crisis is of the government’s own making.

To those for whom power and profit are everything, the end always justifies the means.

This latest brouhaha over President Trump’s threat to declare a national emergency in order to build a border wall is more manufactured political theater, a Trojan Horse intended to camouflage the real threat to our freedoms: yet another expansion of presidential power exposing us to constitutional peril.

This is not about illegal immigration or porous borders or who will pay to build that wall.

This is about unadulterated power and the rise of an “emergency state” that justifies all manner of government tyranny in the so-called name of national security.

The seeds of this present madness were sown more than a decade ago when George W. Bush stealthily issued two presidential directives that granted the president the power to unilaterally declare a national emergency, which is loosely defined as “any incident, regardless of location, that results in extraordinary levels of mass casualties, damage, or disruption severely affecting the U.S. population, infrastructure, environment, economy, or government functions.”

Mind you, that national emergency can take any form, can be manipulated for any purpose and can be used to justify any end goal—all on the say so of the president.

This is exactly the kind of mischief that Thomas Jefferson warned against when he cautioned, “In questions of power, then, let no more be heard of confidence in man, but bind him down from mischief by the chains of the Constitution.”

Thus far, we have at least pretended that the government abides by the Constitution.

Despite the many attempts by government leaders to claim broader powers for themselves during wartime, the Constitution allows for only one emergency power: “The privilege of the writ of habeas corpus shall not be suspended, unless when in cases of rebellion or invasion the public safety may require it” (Article 1, Section 9, Clause 2).

This threat by Trump to rule by fiat merely plays into the hands of those who would distort the government’s system of checks and balances and its constitutional separation of powers beyond all recognition.

Apart from the fact that this highly politicized, shamelessly contrived border crisis does not in any way constitute a national emergency, to allow such a manufactured emergency to override constitutional constraints and the rule of law will push the nation that much closer to outright totalitarianism.

To be clear, this is not a criticism of Trump or a disavowal of the need for better vigilance at the nation’s border.

Rather this is a word of warning.

Remember, these powers do not expire at the end of a president’s term. They remain on the books, just waiting to be used or abused by the next political demagogue.

So, too, every action taken by the Trump administration to weaken the system of checks and balances, sidestep the rule of law, and expand the power of the president makes us that much more vulnerable to those who would abuse those powers in the future.

No matter whether you consider Trump to be a demagogue or a die-hard patriot, there will come a day when Trump no longer occupies the White House, and then what?

We’ve been down this road before.

Although the Constitution invests the President with very specific, limited powers, in recent years, American presidents (Trump, Obama, Bush, Clinton, etc.) have claimed the power to completely and almost unilaterally alter the landscape of this country for good or for ill.

Should the Trump Administration act on its threat to build a border wall using the president’s emergency powers, it would constitute yet another gross perversion of what limited power the Constitution affords the executive branch.

The powers amassed by each successive president through the negligence of Congress and the courts—powers which add up to a toolbox of terror for an imperial ruler—empower whomever occupies the Oval Office to act as a dictator, above the law and beyond any real accountability.

As law professor William P. Marshall explains, “every extraordinary use of power by one President expands the availability of executive branch power for use by future Presidents.” Moreover, it doesn’t even matter whether other presidents have chosen not to take advantage of any particular power, because “it is a President’s action in using power, rather than forsaking its use, that has the precedential significance.”

In other words, each successive president continues to add to his office’s list of extraordinary orders and directives, expanding the reach and power of the presidency and granting him- or herself near dictatorial powers.

This abuse of presidential powers has been going on for so long that it has become the norm, the Constitution be damned.

We no longer have a system of checks and balances.

“The system of checks and balances that the Framers envisioned now lacks effective checks and is no longer in balance,” concludes Marshall. “The implications of this are serious. The Framers designed a system of separation of powers to combat government excess and abuse and to curb incompetence. They also believed that, in the absence of an effective separation-of-powers structure, such ills would inevitably follow. Unfortunately, however, power once taken is not easily surrendered.”

All of the imperial powers amassed by Barack Obama and George W. Bush—to kill American citizens without due process, to detain suspects indefinitely, to strip Americans of their citizenship rights, to carry out mass surveillance on Americans without probable cause, to suspend laws during wartime, to disregard laws with which he might disagree, to conduct secret wars and convene secret courts, to sanction torture, to sidestep the legislatures and courts with executive orders and signing statements, to direct the military to operate beyond the reach of the law, to operate a shadow government, and to act as a dictator and a tyrant, above the law and beyond any real accountability—have become a permanent part of the president’s toolbox of terror.

These presidential powers—acquired through the use of executive orders, decrees, memorandums, proclamations, national security directives and legislative signing statements and which can be activated by any sitting president—enable past, president and future presidents to operate above the law and beyond the reach of the Constitution.

If we continue down this road, there can be no surprise about what awaits us at the end.

After all, it is a tale that has been told time and again throughout history.

For example, over 80 years ago, the citizens of another democratic world power elected a leader who promised to protect them from all dangers. In return for this protection, and under the auspice of fighting terrorism, he was given absolute power.

This leader went to great lengths to make his rise to power appear both legal and necessary, masterfully manipulating much of the citizenry and their government leaders.

Unnerved by threats of domestic terrorism and foreign invaders, the people had little idea that the domestic turmoil of the times—such as street rioting and the fear of Communism taking over the country—was staged by the leader in an effort to create fear and later capitalize on it. In the ensuing months, this charismatic leader ushered in a series of legislative measures that suspended civil liberties and habeas corpus rights and empowered him as a dictator.

On March 23, 1933, the nation’s legislative body passed the Enabling Act, formally referred to as the “Law to Remedy the Distress of the People and the Nation,” which appeared benign and allowed the leader to pass laws by decree in times of emergency.

What it succeeded in doing, however, was ensuring that the leader became a law unto himself.

The leader’s name was Adolf Hitler.

The rest, as they say, is history. Yet history has a way of repeating itself.

Hitler’s rise to power should serve as a stark lesson to always be leery of granting any government leader sweeping powers.

Clearly, we are not heeding that lesson.

Indeed, all of those dastardly seeds we have allowed the government to sow under the guise of national security are bearing demon fruit.

There is something being concocted in the dens of power, far beyond the public eye, and it doesn’t bode well for the future of this country.

Anytime you have an entire nation so mesmerized by the antics of the political ruling class that they are oblivious to all else, you’d better beware.

Anytime you have a government that operates in the shadows, speaks in a language of force, and rules by fiat, you’d better beware.

And anytime you have a government so far removed from its people as to ensure that they are never seen, heard or heeded by those elected to represent them, you’d better beware.

As I make clear in my book Battlefield America: The War on the American People, we are at our most vulnerable right now.

The gravest threat facing us as a nation is not extremism but despotism, exercised by a ruling class whose only allegiance is to power and money.

Constitutional attorney and author John W. Whitehead is founder and president of The Rutherford Institute. His new book Battlefield America: The War on the American People  (SelectBooks, 2015) is available online at www.amazon.com. Whitehead can be contacted at [email protected].