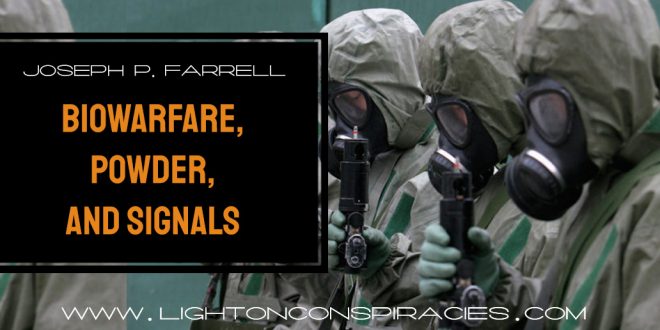 There’s been a lot of speculation out there about the connection between the corona virus and 5g. But a big thank you to G.L.R. who found this one, and it’s a whopper-doozie. What he found was a declassified 42 page US Air Force document.

The work itself is a mind-numbing gut-wrenching summary of biowarfare modalities:

However, for those connecting the corona virus story to the 5G phenomenon, there’s something quite interesting in it. Thus far, I’ve seen two basic approaches to this connection. One is that favored by Jon Rappoport, who sees the virus aspect of the story as a cover behind which the effects of other factors are being masked, which could include 5g. Indeed, the 5G parallels to the virus outbreaks is there for all to see: Wuhan and Milan, for example, are both places where 5G is in operation. The other approach, which I’ve blogged about earlier this week, is to connect the virus outbreak as a stimulation of disease via electromagnetic “templates” of the disease, perhaps in conjunction with an actual genetically engineered pathogen.

It’s that latter idea that, in fact, one finds clearly outlined in the US Air Force document, on page 15 in the actual document, and page 26 if you’re searching in the pdf file:

Stealth Viruses: The basic concept of this potential bioweapon is to “produce a tightly regulated, cryptic viral infection that can enter and spread in human cells using vectors” (similar to the gene therapy) and then stay dormant for a period of time until triggered by an internal or external signal. The signal then could stimulate the virus to cause severe damage to the system. Stealth viruses could also be tailored to secretly infect a targeted population for an extended period using the threat of activation to blackmail the target.

State of the Bioweapon: Stealth viruses just like the gene therapy, require a vector to be inserted in the body and lay dormant until a trigger mechanism is activated either internally or externally. Imagine having a cancer causing virus enter a human cell and lay dormant until an external signal triggers the disease. When the signal gets activated the cells become abnormal and could rapidly generate abnormal cell growth leading to a tumor and ultimately, death. Now, apply this concept to a population where an HIV virus gets disseminated within a target population. At a specific time chosen by the perpetrator, the signal would be triggered to harm an entire population all at once. Although this bioweapon is futuristic it is not improbable and deserves to be examined. (italicized emphasis added)

The paper, in effect, outlines what many people are already speculating about 5G and the corona virus story. Combine this with a genetically-engineered pathogen designed to attack only certain populations – like the Chinese – and all it would take to “turn on the virus” would literally be for someone to turn on the “signal,” and notably, if properly configured, the person turning on the signal may not even know he’s turning on the virus.

There’s a hint, however, in this document that it might have been reality, and long before 2010 at that. Note the reference to HIV, and even more particularly, to sudden onset and rapidly spreading cancer.  In reading this, I could not help but think of all those cases of key people in the position of knowledge, influence, or the ability to derail “certain projects and/or narratives,” that came down suddenly with cancer, and died.  I cannot help, for example, but think of Jack Ruby, notorious mob figure and murderer of Lee Harvey Oswald. Ruby, it will be recalled, even claimed that “they” had given him cancer and were killing him. And for those familiar with the research of Ed Haslam outlined in his book Dr Mary’s Monkey, there’s a further curious connection to consider in regard to this idea. Dr. Mary Sherman hovers uneasily on the fringes of all the weird connections in the murder of President John F. Kennedy.  In her day she was a well-known cancer oncologist, and, incidentally, one of those who at that time believed cancers were a virus, and a close colleague of  Dr. Alton Ochsner and his clinic. Dr. Ochsner was the world-famous president of the American Cancer Society, but according to Mr. Haslam, he had a dark side in trying to weaponize cancer for the CIA, research in which Dr. Sherman was allegedly involved. She had access to the particle accelerator at Tulane University in New Orleans, and indeed, when she was found dead, she was found with her right arm simply burned – or disintegrated – away, as if she had suffered “death by particle accelerator.”

Now why am I rehearsing all of this? It’s about that “sudden onset cancer” hypothesis, and Jack Ruby’s statements: I have to wonder if, in their covert researches, Drs. Ochsner and Sherman discovered that cancers could be activated, and/or accelerated, by exposure to certain types of radiation under special circumstances. After all, radiation was then, and is today, one of the means of treating cancers, but one might also imagine certain circumstances where it could cause, or activate and accelerate cancers. Certain occupations where long term exposure to radiation increases the likelihood of cancers are already known, and were known even in their day. So it requires no great leap of the imagination to see that the technique outlined in 2010 might in fact have been around for some time, and have been perfected to the extent that it was utilized in the stimulation and acceleration of other types of diseases.

See you on the flip side…