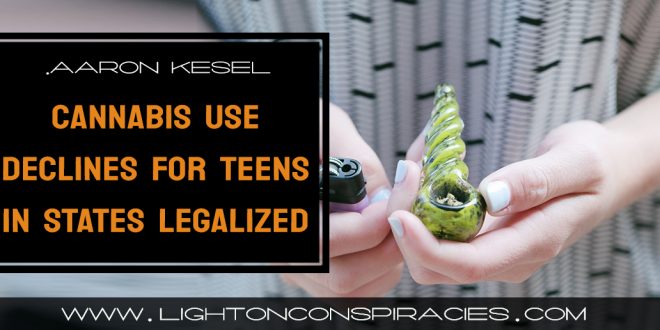 Cannabis Use Declines For Teens In States Legalized According To Studies Use of cannabis has dropped by teenagers in Washington since legalization in 2012, according to a study published by the Journal of the American Medical Association, the Seattle Times reported.

The study, comprised of data from 2014-2016, showed a decrease in marijuana usage by teens in both middle and high school.  According to the study, use amongst 8th graders dropped from 9.8 to 7.3 percent over that period, while use amongst 10th graders fell from 19.8 to 17.8 percent. Meanwhile, use by seniors remained flat at just over one in four students, 26.7 percent, during those time periods.

As a reminder for the reader, the legal age to consume marijuana in Washington is 21.

There is often much concern among politicians and medical professionals when cannabis is legalized that use among kids would skyrocket. So it’s refreshing to see researchers are finding quite the opposite.

The numbers are encouraging, said Julia Dilley, one of the study’s authors and a senior research scientist at the Oregon Health Authority and Multnomah County Health Department. However, she warned that the data is limited and there is much to learn about the impacts of legalization on children.

There is also a drop in use for teens in Colorado, the first state to legalize marijuana. That study was run by the Colorado Department of Public Health and Environment, which found 21.2 percent of Colorado high school students surveyed in 2015 had used marijuana during the preceding 30 days, down from 22 percent in 2011, the year before voters statewide approved recreational cannabis use by adults 21 and older, Scientific American reported.

A former study by the journal Addiction noted earlier this year that frequent cannabis use by adolescents dropped in states where medical marijuana is legal, which at the time of the 2016 election included 28 states plus DC.

Going further than that, the National Institute on Drug Abuse (NIDA) has also recently released its own “Monitoring the Future” survey, evaluating the drug habits of American eighth, tenth and twelfth graders. The study also showed that teen use of marijuana has dropped since states began legalizing the substance back in 2012.

“Rates of marijuana use by teens have been of great interest to researchers over the past decade, given major social and legislative shifts around the drug; it is now legal for adult recreational use in 10 states plus the District of Columbia, and it is available medicinally in many more,” reads a NIDA press release. “Fortunately, even as teens’ attitudes toward marijuana’s harms continue to relax, they are not showing corresponding increases in marijuana use.”

This is all scientific evidence showing that, despite the legalization of marijuana, adolescent use has gone down. This may prove the old argument that if you make something legal, it makes it uncool and is, therefore, a deterrent for use.