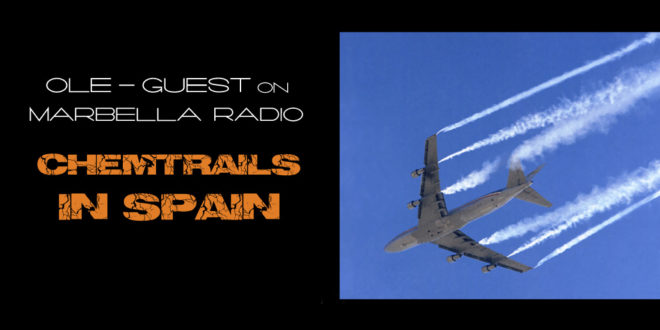 Published on Apr 28, 2016
Ole Dammegard from Light on Conspiracies goes head to head with Herschel 36 from Truth is Stranger Than Fiction to deal with the day to day reality. Chemicals are being released by non commercial planes over the South Coast of Spain, on the costal line from Malaga to Marbella and over to Africa.

The interview includes this weeks footage of the planes flying over the coast line with long white lines of exhaust coming out of the back of the planes. The interview touches upon the fact that Prince came out on USA TV and spoke about chemtrails before he died and the fact that the Simpsons episode mentions that Homer was paid by the CIA to kill Prince for not doing what he said.

Truth truly is Stranger than Fiction and this interview is a must watch for anyone desperate for the truth and lives in Europe. The chemtrails are throughout Europe and the US it feels as if we are all living in a huge concentration camp and we are slowly being gassed.

Please wake up now and contact us if you would like further information or you would help in tracking the planes as they dump their chemicals on us.

The time to act is now!

Please contact us if you are interested in finding out more about Kangen Water the best Alkaline Water system in the World.