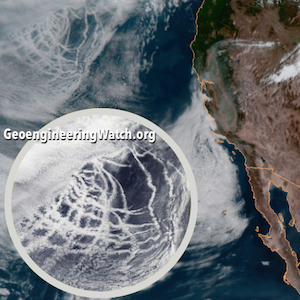 NASA tells us that the shockingly visible and very extensive “tracks” (or trails) being witnessed on satellite imagery over oceans are ALL the result of pollution being produced by ships, which is in turn creating “clouds” as an unintended consequence. Does the “official narrative” from NASA actually hold up to an examination of the facts? Please view the 7 minute video below and come to your own conclusions.

NASA is nothing more than an arm of the military industrial complex, covering the tracks of the climate engineers and SRM operations is a part of their mission.

Scientists are interested in ship tracks because they want to understand how human emissions influence clouds and, ultimately, Earth’s climate. (NASA)

NASA, of course, does not in any way acknowledge the ongoing geoengineering / solar radiation management / marine cloud brightening / jet aircraft dispersions. The ongoing illegal global climate intervention programs are inflicting immense and irreparable damage to the climate and the overall life support systems of the planet. Each and every one of us is needed in the all important effort to reach a critical mass of awareness. Share credible data from a credible source, help us to sound the alarm.
DW

May be freely reprinted, so long as the text is unaltered, all hyperlinks are left intact, and credit for the article is prominently given to GeoengineeringWatch.org and the article’s author with a hyperlink back to the original story.

Previous How the Gig Economy Empowers Unschoolers
Next These 13 Corporations Are “Big Pharma”: Their Crimes, History and Products