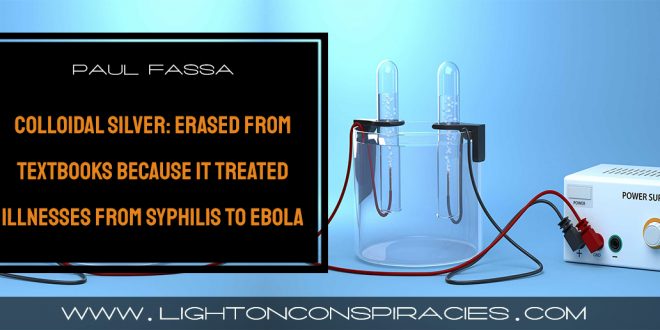 Colloidal Silver: Erased From Textbooks Because It Treated Illnesses From Syphilis to Tuberculosis to Ebola

Have you ever heard of anyone burning from the inside out? It is called Stevens-Johnson syndrome (SJS) and it is gruesome. The whole body begins to blister to the point where an SJS victim needs to be treated as a burn victim. And it’s most often an adverse side effect of conventional antibiotics.

Dr. Joshua Zeichner, a dermatology professor at the Mount Sinai Hospital in Manhattan explained, “You’re not truly burned, but what happens is you have compromised the skin barrier function.” He explained that the epidermis separates from the dermis.

Wonderful side effect, eh? Zeichner added that SJS reactions occur mostly from antibiotics, adding “Unfortunately, we have no way of predicting who would have this type reaction.”

When’s the last time you were tested for an antibiotic intolerance or as the medicos say, allergy? Instead you are briefly asked “are you allergic to any medications?” What! You’re expected to know which one of hundreds of pharmaceuticals out there you are “allergic to” even if you’ve never had any of them?

Your answer should be “all of them” if you want to avoid adverse effects. You’d be much better off with colloidal silver.

Seems like they want to overlook colloidal silver and maintain the illusion they are the only ones who can cure your sniffles.

And why do they need to keep developing new ones? There are many unpublicized reports of nasty side effects, sometimes chronic and serious, sometimes sub-clinical, that result from taking Big Pharma’s purported little life savers.

This is especially true with the fluoroquinoline series of antibiotics. A PBS national TV news special about the gruesome effects of these fluoroquinoline were shown. These painful debilitating effects were not temporary. It took a lot of effort to regain a normal life for a few while others continue to suffer or commit suicide. More on the fluorquinolone antibiotic adverse effects here.

But the rest of the media still pushes the “blue man” who used excessive amounts of home-made colloidal silver on a daily basis for many years and developed a rare permanent skin condition called argyria (ar-ji’-re-a).

What is constantly disregarded in this case is the blue man, or “papa smurf”, had been making a form of colloidal silver containing silver particles that were too heavy. Despite that, he was otherwise healthy and never even had a cold for years. He passed away from heart failure and stroke in his 60s.

This type of colloidal silver negative press gets more play in Wikipedia and other pro-pharmaceutical industry anti-natural remedy media outlets than the many who suffer negative consequences of pharmaceutical antibiotics.

EU regulations have forced colloidal silver off their shelves. So far, it’s still available in the United States. And there are machines that enable you to make your own if the FDA “harmonizes” with the EU and bans colloidal silver products. I recommend this source. https://www.utopiasilver.com/

Greg-Jones is a law firm specializing in prosecuting drug companies on behalf of victims with pharmaceutical adverse effects has this to say about Stevens-Johnson syndrome (SJS) and its disease close cousin disease Toxic Epidermal Necrolysis (TEN) another side effect of many pharmaceuticals and Big Pharma antibiotics.

-Stevens-Johnson syndrome has a mortality rate of 5%.”

-Toxic epidermal necrolysis may be fatal in up to 50% of patients.

They don’t collect their fee unless they win the case. So they must feel confident about what ambulances they’re chasing. And more than one MD has offered a report explaining how many deaths are caused from correctly prescribed drugs.

One of them is Dr. Barbara Starfield, who in the July 26, 2000 Journal of the American Medical Association (JAMA), revealed the American medical system kills 225,000 people per year—106,000 as a direct result of pharmaceutical drugs correctly prescribed. That’s turned out to be a conservative low figure.

Medical Mafia is the right tag for the allopathic medical monopoly that lies about so called “alternative” medicines that heal without dangerous side effects while propagandizing their harmful synthetic drugs.

The only caveat with colloidal silver is that if you ingest it orally, you should take a probiotic a couple of hours later.

A couple of expert sources have told me that’s not necessary if you’re inhaling it with a nebulizer or keeping it under the tongue for sublingual consumption then spitting it out. Both those techniques bypass the gut.

To learn more about colloidal silver and its many uses, read my previous article: What Convinced Me to Use Colloidal Silver

Paul Fassa is a contributing staff writer for REALfarmacy.com. His pet peeves are the Medical Mafia’s control over health and the food industry and government regulatory agencies’ corruption. Paul’s valiant contributions to the health movement and global paradigm shift are world renowned. Visit his blog by following this link and follow him on Twitter here.