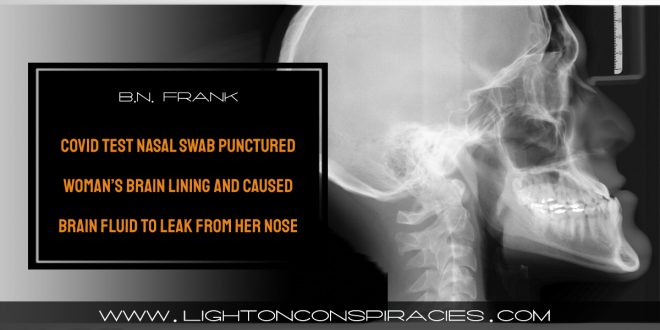 There have been a number of reports about COVID-19 tests being inaccurate (see 1, 2). This may be the first (and hopefully the last) of a nasal swab puncturing someone’s brain lining.

A woman has suffered a brain fluid leak after doctors punctured the lining during a coronavirus test.

The woman, aged in her 40s, had an undiagnosed rare condition and the test she received may have been carried out improperly, according to the study published in the JAMA Otolaryngology–Head and Neck Surgery.

She underwent testing in March before presenting to doctors with symptoms including “metallic taste, headache, neck stiffness, and photophobia”.

Dr Jarrett Walsh, from the University of Iowa Hospital, senior author of the paper, told the AFP the woman had undergone two swabs. A CT scan shows a gap in the area closing around the brain near the woman’s nasal cavity. Source: JAMA Otolaryngology–Head & Neck Surgery

He said she had undergone the swab ahead of an elective hernia surgery but noticed clear fluid coming out of one side of her nose.

Obviously, this woman’s pre-existing condition contributed to this situation. Regardless, nasal swab tests aren’t the only way to test for this virus.

As COVID-19 concerns continue to increase, many types of invasive technology are also rapidly being introduced in the U.S. and worldwide in an effort to detect illness and prevent its spread. This includes wearables worn by U.S. military personnel, employees (see 1, 2), school children and staff. Expensive temperature scanning technology has also been installed at schools and universities which at least one epidemiologist says is a bad idea for a variety of reasons.

So there’s that too.

Share
Previous Dr. Mullis on the PCR tests he invented. Please watch twice, make sure you got
Next Pandemic Special: “Don’t Pay Rent Until 2021” For NYC Apartments