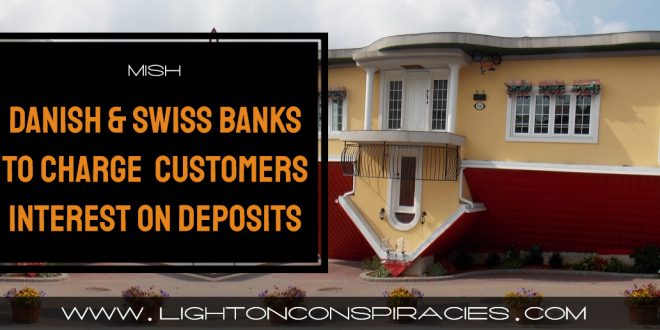 Jyske Bank said on Friday people with more than $111,100 in their bank accounts will be charged more for their deposits as it seeks to pass on some of the costs of recent rate cuts by the European and Danish central bank.

Jyske Bank, Denmark’s second-largest bank, said it would introduce a negative interest rate of 0.75% for all corporate deposits and for private clients depositing more than 750,000 Danish crowns ($111,100) from Dec 1.

Last week, Denmark’s central bank cut its key deposit rate to minus 0.75%, a record low among developed economies. “It is a lot of money and we have to pass on part of this bill to our customers,” he said. “I don’t hope that we will have to go lower but I don’t dare to promise it.”.

Denmark’s largest bank, Danske Bank has said it has no plans to introduce negative interest rates on deposits. Switzerland’s UBS has said it will impose a negative rate of 0.75% on clients who deposit more than 2 million Swiss francs ($2 million). ($1 = 6.7559 Danish crowns)

If you live in Denmark and have a bank account in excess of $100,000 or so, why would you have it at Jyske Bank which charges 0.75% while Danske Bank, the country’s largest bank doesn’t?

Any Danish readers care to answer?

Perhaps we have an answer from Bloomberg in the following discussion.

Shares in Jyske closed more than 5% higher marking their best performance since December 2017, as investors calculated the impact that the new policy will have on the bank’s net interest income.

Jyske has “set the ball rolling,” said Per Hansen, an investment economist at broker Nordnet.

Per Hansen commented “imposing such a policy is politically difficult for Danske, given its recent history of financial scandals. The bank is being investigated for a $220 billion money-laundering affair, and has been reported to the police for a separate case in which it overcharged retail investors.”

Regardless of the answers, I expect to see an increased demand for gold, the US dollar, US treasuries, and safes as these pass-through policies escalate.

A week ago I commented on the ECB’s Counterproductive QE: Whatever It Takes Morphs Into “As Long As It Takes”

European banks are getting killed on these policies.

Jyske has “set the ball rolling,” said Per Hansen.

Yes, and if Central Banks stick with their “as long as it takes” approach, the results are likely to be disastrous.

Share
Previous Want To Save The World? Homeschool Your Children So The Communist Educators Do Not Get Their Grubby Paws On Them To Indoctrinate Them With Radical ‘Social Justice’ Agendas
Next Vaccine Injuries and Legal Mandates