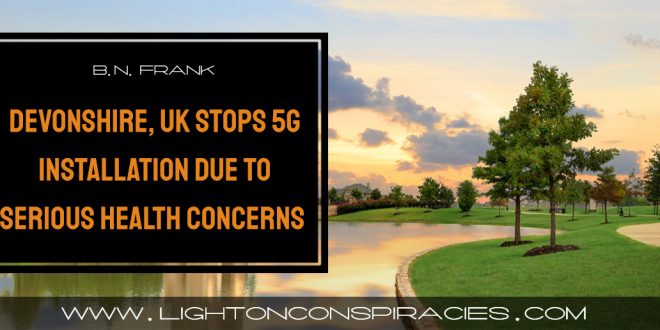 Activist Post regularly reports about increasing opposition to the forced installation of 5G technology in American communities and around the world.  In February, the telecom industry provided U.S. congressional testimony that they have NO scientific evidence that 5G is biologically safe.  Many doctors and scientists insist that IT ISN’T (see 1, 2, 3, 4).  Illness has already been reported where 5G has been installed (see 1, 2, 3).

Thanks to Collective Evolution for another jam-packed article with 5G medical testimony, opposition, research, and good news from Devonshire and around the world.

New research also shows how the frequencies utilized in the 5G network are being tested and employed as crowd control weapons, which physically impact our biology. In a lecture from Dr. Ben-Ishai of the Department of Physics at Hebrew University, we can discover how these emissions actually interact with human skin and eyes to and negatively impact our health. Human sweat ducts act like a number of helical antennas when exposed to these wavelengths that are put out by the devices that employ 5G technology.

If you are one of the millions who seek faster downloads of movies, games and virtual pornography, a solution is at hand, that is, if you do not mind volunteering your living body in a giant uncontrolled experiment on the human population. At this moment, residents of the Washington, DC region – like those of 100 Chinese cities – are about to be living within a vast experimental Millimeter wave network to which they have not consented – all courtesy of American taxpayers.

The good news is that steps are already being taken around the world to mitigate the rollout of 5G. Where I live, for example, doctors treating patients from over-exposure to wireless radiation joined scientists at Queen’s Park in Toronto who assembled in front of parliament to urge the Ontario Government to take steps to protect public health before the roll-out of 5G cell phone technology. In this public hearing, Dr. Anthony Miller, Professor Emeritus at the University of Toronto, and adviser to the International Agency for Research on Cancer, said:

Many scientists worldwide now believe that radiofrequency radiation should be elevated to a Class One human carcinogen, on the same list as Cigarettes, X-Rays, and Asbestos. (source)

Below is a statement made by  Céline Fremault, the Minister of the Government of the Brussels-Capital Region, responsible for housing, quality of life, environment and energy, from an interview last Friday, with L’Echo:

I cannot welcome such technology if the radiation standards, which must protect the citizen, are not respected, 5G or not. The people of Brussels are not guinea pigs whose health I can sell at a profit. We cannot leave anything to doubt.

Ms. Fremault accurately identified that a 5G pilot project is not compatible with Belgian radiation safety standards (9 V/m, or 95 mW/m2 according to this online converter), and stated that she does not intend to make an exception. In the Building Biology guidelines, the threshold for extreme concern is 1 mW/m2.

The latest place making noise is in Devonshire, UK.  Many campaigners are protesting days after Chancellor Sajid Javid announced a £5 billion Government package to support the rollout of broadband, 5G and other high-speed networks aimed at reaching the hardest-to-reach 20 per cent of the country.

Apparently, according to the Daily Mail, the campaigners say residents are taking their message seriously and more than 1,600 have signed a petition for more safety research. As a result, town councillors have approved a moratorium. (source)

Engineers, environmentalists, meteorologists, NASA, NOAA, U.S. Navy, security experts and other credible sources also insist that 5G is NOT SAFE for a variety of other reasons other than biological risks (see 1, 2, 3, 4).

For more information, visit our archives and the following websites: