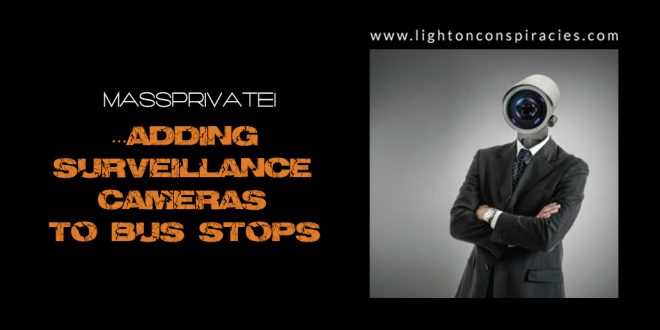 Not content with surveillance cameras on buses, the police state has now begun adding them to bus stops.

Last month an article in WTVR 6 revealed that the Greater Richmond Transit Center (GRTC) is installing more than one hundred surveillance cameras at bus stops.

What should really concern everyone is the amount of cameras being installed at each bus stop.

Each of the 26 new stops, built to accommodate the bus line’s need for more efficient transit, includes about four cameras, making for more than 100 new surveillance devices on the roughly 7.5-mile stretch of road… (Source: Style Weekly)

WTVR also revealed that police can use the cameras to spy on commuters 24/7.

“The system will be live 24 hours a day and will be connected to Richmond 911 call center,” Rose Pace said.

According to Style Weekly, police will now have access to more than three hundred surveillance cameras.

This new system will bring the total number of easily accessible, city or government-owned cameras available to police and other authorities to more than 300, including roughly 200 stationary cameras Richmond police already have easy access to, and 32 cameras owned by city police.

Every one of GRTC’s buses are already with four surveillance cameras that are capable of spying on
1.6 million commuters.

If you combine bus stop cameras with police cam-share cameras, the picture becomes even more frightening.

Businesses across the country are being encouraged to allow police to have real-time access to their CCTV cameras, effectively creating a city-wide police surveillance network.

At a time when violent crime is at historic lows one has to ask, why do we need city-wide police surveillance networks?

DHS and the TSA’s role in turning public transportation into city-wide police surveillance networks is unmistakable.

A 2010 US Government Accountability Office report titled ‘Public Transit Information Sharing’ revealed that the TSA and DHS are working together to create a giant public transit surveillance network.

It’s time for Americans to take back our privacy.

If we let DHS and the TSA have their way, they will turn bus and train stations into airport-style security complete with biometric scanners.