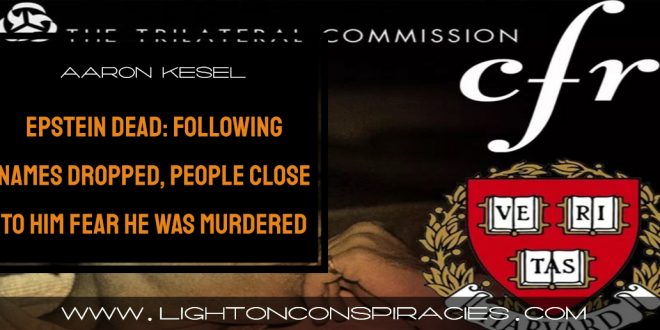 Epstein Dead: Following Names Dropped, People Close To Him Fear He Was Murdered; Warned Someone Tried To Kill Him

Jeffrey Epstein was found dead on the floor of his cell only 2 weeks after it was reported that he had “attempted suicide” and was put on suicide watch, and one day after a cache of documents was unsealed in a federal civil case in New York yesterday.

The documents were unsealed from Ghislaine Maxwell’s defamation lawsuit with Virginia Guiffre, which was settled in 2017 and decided in a sealed session.

These documents reveal further details of the intelligence-linked pedophile blackmail operation that Epstein ran presumably for Mossad and the CIA recording influential people honey trapping them, as Whitney Webb has revealed in a series of articles for MintPress News with the latest diving into the infamously secret MEGA group.

These files open a window into the alleged lives of numerous elite figures that has previously been closed off from the public. This author recommends reading The Daily Beast‘s full in-depth article on the bombshells within the newly unsealed documents.

Epstein, a registered sex offender, was re-arrested last month by a joint FBI-New York Police Department task force after he landed in New Jersey’s Teterboro Airport while coming back from a holiday trip from Paris, Activist Post reported.

Two of those names that stick out are Bill Richardson (who is in WikiLeaks files including the Podesta emails a total of 2,691 times) and George Mitchell, a former U.S. senator.

Richardson is also a former DNC chairman and presidential candidate, and he served as President Bill Clinton’s Energy Secretary and UN Ambassador in the late 1990s.

Brunel, who heads MC2, has previously been accused of supplying underage girls to Epstein, which he has denied.

The French modeling scout has long faced accusations that girls were drugged and raped. Brunel was also the subject of a 60 Minutes exposé on sexual abuse in the modeling industry.

There were a number of people in Epstein’s little black book, including at least 50 notable figures circled.

No one thus far besides Epstein has been charged. All of those accused have denied the accusations and claimed they never visited Little St. James island, flown on Epstein’s Lolita Express or had any interactions with underage girls.

Less than 24 hrs later, today, Epstein was found hanged in his cell in the special housing unit of the Metropolitan Correctional Center in New York about 6:30 a.m after suspiciously being removed from suicide watch, according to Reuters.

In other words, Epstein wasn’t under surveillance at the time he “took his own life.” Although, Epstein reportedly warned people close to him that someone tried to kill him the other week when he was found barely breathing on the floor, and those same people are worried he was now murdered, Washington Post reported.

Share
Previous Prepping Has Gone Mainstream: Politics, a “Culture of Fear,” or a Return to What’s Been Lost?
Next The Infallible AI “Oracle” and the Future of “One Shot” Answers