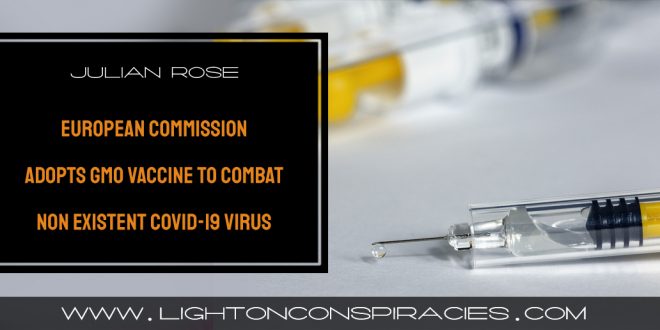 In a decision which will shock many, the European Commission has taken a big step towards its ambition to subject its citizens to a totalitarian regime in which DNA altering technology forms the centre piece of mass control and unapologetic rule by despotism.

Under the chairmanship of the German Minister of Health, Jens Spahn, The Commission has adopted a new ruling which calls for ‘the swift development of a GMO vaccine against Covid-19’.

Overturning its own earlier regulatory position, the Commission issued a press release on 14 July 2020, stating that this new act provides a ‘temporary derogation’ of clinical trials for a vaccine under what it cites as ‘the contained use of genetically modified organisms.’

The press release goes on to say “The regulation will apply only as long as Covid-19 is regarded as a pandemic by the World Health Organisation, or as long as an implementing act by which the Commission recognises a situation of public health emergency due to Covid-19 applies.”

The text goes on to state “The derogation provides that most operations related to the conduct of clinical trials will not require a prior environmental risk assessment or consent.”

Jens Spahn is quoted as saying “A vaccine against Covid-19 is urgently needed. This regulation will ensure that clinical trials in the EU can start without delay and that no precious time is lost. The act adopted today shows that the EU is ready to take the lead in the global effort to secure the development of a safe and efficient vaccine.”

The European Commission, in need of a further ‘fear factor’ to exacerbate worry about a ‘second wave’, has clearly adopted the deeply flawed and widely disproven WHO position, that Covid-19 is a ‘public health emergency’. More than this, it has decided that only a GMO Vaccine can eradicate that which is supposedly the cause of this emergency.

One could hardly ask for a more blatant example of the New World Order centralised control system – being pressed into service at the hands of unelected technocrats, Big Pharma and vaccination moguls whose names we are already all too familiar with.

This calls for a large scale act of international resistance and a reversal of the deeply arrogant rule by despotism which is attempting to wrest control of the planet.

The URL for the Commission’s Press Release and details of the regulation here: