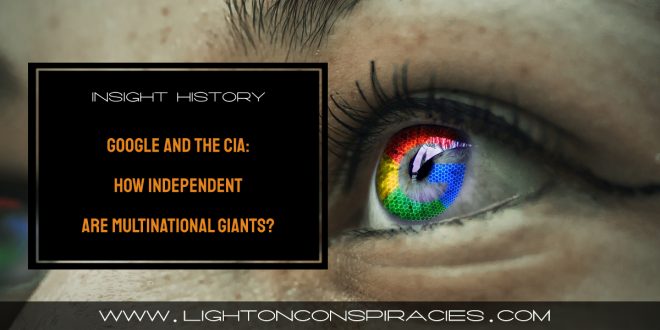 How independent are the largest corporations in the world? It is often portrayed that companies such as Google are simply private corporations that have very few connections to the establishment. Yet, as It turns out, there are endless connections between many corporate giants and the military-intelligence complex.

We got a glimpse into this relationship back in 2016, when the former CEO of Google, Eric Schmidt, who, at the time, was Executive Chairman of Google’s parent company, Alphabet Inc, became the head of a new innovation board at the Pentagon. Later that year, Jeff Bezos, the CEO of Amazon, joined the same board at the Pentagon.

The ties between Google and US government agencies run much deeper than this, however. The relationship started even before the tech company was founded in the late 1990s. In 1994, the US government launched the Digital Library Initiative (DLI). This initiative awarded research grants to various university projects, mostly those who focused on developments in the early and emerging internet, with the overarching aim of this initiative being the creation of a global digital library.

Multiple organizations were involved in selecting projects for DLI funds. Three of these organizations were the National Science Foundation, the National Aeronautics and Space Administration (NASA), and The Defense Advanced Research Projects Agency (DARPA), which is the arm of the US Department of Defense that funds and develops emerging technologies.

One project that received funding through the DLI was at Stanford University, called The Stanford Integrated Digital Library Project. Between 1994 and 1999, the project received over $4.5 million in awards. The description of the award is very interesting, as it essentially describes what Google became:

“This project – the Stanford Integrated Digital Library Project (SIDLP) – is to develop the enabling technologies for a single, integrated and ‘universal’ library, proving uniform access to the large number of emerging networked information sources and collections. These include both on-line versions of pre-existing works and new works and media of all kinds that will be available on the globally interlinked computer networks of the future. The Integrated Digital Library is broadly defined to include everything from personal information collections, to the collections that one finds today in conventional libraries, to the large data collections shared by scientists. The technology developed in this project will provide the ‘glue’ that will make this worldwide collection usable as a unified entity, in a scalable and economically viable fashion.”

Two graduate students at Stanford who received funding through the DLI were Larry Page and Sergey Brin, the co-founders of what would become Google Inc in 1998. An early prototype of Google was built at Stanford using DLI funds. It was called BackRub, and, amongst other things, it allowed the user to crawl from page to page by following links. The early Google algorithms were run on a series of computers that were“mainly provided by the NSF-DARPA-NASA-funded Digital Library project at Stanford.” After a few more years of development and funding by various parties, Google was officially born in 1998.

Google Earth and the CIA

The connections between Google and government agencies continued into the 21st century. In the early 2000s, a software company called Keyhole, which developed an earlier version of what became Google Earth, received financing from the CIA’s venture capital firm, In-Q-Tel. The CIA started In-Q-Tel in 1999 as its major investment arm to fund start-ups, businesses, and other ventures, with In-Q-Tel still operational today. The CIA had a partner in financing the Keyhole investment, the National Geospatial-Intelligence Agency (NGA), an organization that provides satellite-based intelligence for US government agencies.

In fact, the CIA and NGA were clientsof Keyhole as well as investors, with Keyhole software used by the intelligence community during the Iraq war. In 2004, Google acquiredKeyhole, with their software becoming the foundation of what we know today as Google Earth. After Google bought Keyhole in 2004, certain executivesfrom the CIA’s In-Q-Tel joined divisions of the tech company. In the coming years, Google hired a host of people from the world of intelligence and defense, and agreed numerous deals with agencies in the intelligence and military community.

Google and the NSA

In 2010, Google enlisted the National Security Agency (NSA) to help them secure their network after a cyberattack. Also in 2010, the investment companies of the CIA and Google, In-Q-Tel and Google Ventures, both invested in a company called Recorded Future, which monitors real-time internet traffic to try to predict future events. In 2012, a US court ruled that the NSA didn’t have to disclose if it had a relationshipwith Google.

In 2013, it was reported that the NSA had direct access to servers run by Google, Apple, Facebook, Microsoft, YouTube, and other corporate giants, under the secret Prism program that had been operational since 2007. This allowed the NSA to collect user data, including search history and the content of emails. Documents from the NSA appeared to indicate that at least some of the companies were aware of the NSA operation, although all the companies denied any knowledge of the program. The connections between multinational corporations and the intelligence community continue. Last year, the CIA handed lucrative cloud computing contracts worth billions to five tech giants, including Amazon, Microsoft, and Google.

There are other data points that are worth noting. In relation to social media, In-Q-Tel has financed numerous data-mining companies in recent years, an unsurprising field for intelligence agencies to be interested in. These companies collect data on people’s social media activity and build unique, individual profiles based on demographic, financial, geographic, and purchase histories.

Another curious data point worth noting is that Steve Jobs, the co-founder and former CEO of Apple Inc, had held a top secret security clearance during his time working at Pixar, according to reports. Over the years, Apple has worked alongside US government agencies on various occasions. In 2005, Apple built a top secret iPod for two defense contractors working on behalf of the US Department of Energy. The custom iPod looked and worked like a normal iPod, but had extra hardware in it that secretly recorded data. Only four people at Apple knew about the project, according to reports. A decade later, in 2015, Apple was one of a group of companies and universities that were working on a Pentagon contact to design stretchable electronics with sensors that could be worn by soldiers or fitted on warplanes and ships.

Needless to say, there are endless connections between many multinational corporations and the military-intelligence community, raising questions over how independent many of these companies actually are.