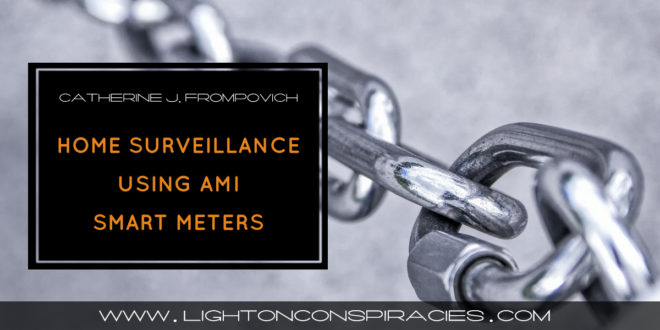 AMI (Advanced Metering Infrastructure) Smart Meters (AMI SMs) are being forced on to everyone’s home, apartment, condo and businesses in the United States with total disregard for numerous legal aspects, with one specifically-egregious issue experiencing total abandonment or disregard for the U.S. Constitution, plus individuals’ rights under their respective home states’ constitutions.

Another issue I will not discuss here, but is crucial, is AMI SMs are fire hazards since most are built with plastic parts, are not grounded with surge protectors as analog meters were, and are subject to spiking sinusoidal wave activity, aka “dirty electricity”, thousands of times each day traveling over 60 Hz-rated copper wires inside home walls.  If there’s a fire caused by an AMI SM, it’s deemed to be the property owner’s fault.   Really!

So, what am I talking about?  Privacy and the right to be secure in your home!  The Search and Seizure aspects found and shielded in the Fourth Amendment to the U.S. Constitution are not being respected nor enforced by state public utility commissions and utility companies, most of who are harassing customers!

The right of the people to be secure in their persons, houses, papers, and effects, against unreasonable searches and seizures, shall not be violated, and no Warrants shall issue, but upon probable cause, supported by Oath or affirmation, and particularly describing the place to be searched, and the persons or things to be seized. [1] [CJF emphasis]

Depending upon where one lives, all sorts of rhetoric are offered as to why an AMI SM must be retrofitted on to one’s utility services (electric, natural gas and water), with total disregard for what should be considered criminal actions perpetrated upon customers who refuse AMI SMs.

Note the federal government did not mandate AMI SMs in the federal Energy Policy Act of 2005 [5] as they knew it would be unconstitutional and objected to!

AMI SMs are nothing but “surveillance computers”!

Let me say that again.  AMI SMs are nothing short of “surveillance computers”.  They are built and intended to

[…] transfer the stored utility consumption data for applications such as analysis of household power consumption by an end-user or by a utility supplier, or monitoring occupancy and activity within a household. [2] [CJF emphasis]

Read that again, please, and let that sink in.  Big Brother is a factual reality.  How do you like ‘them apples’?   Is that some sort of joke or mistake on this writer’s part?  No!  There’s documented proof in the way of an online published patent, which follows.

The patent information for AMI Smart Meter surveillance and sales of data designated as “Data storage and transfer” EP 2499463 B1 of public record [2] noting the applicant is ONZO Limited, a surveillance and data collection algorithm described in an Internet infomercial at https://youtu.be/uluKjzqHDz0? and in the Activist Post article “Onzo, Possibly A Utility Customer’s Worst ‘Friend’”.

From the Google Patent website, we have the algorithm ONZO description [2] as follows:

Field of the Invention

This invention relates to methods, systems, devices and computer code for storage and transfer of data, particularly data associated with consumption of utilities such as gas, water and electricity, and to transfer the stored utility consumption data for applications such as analysis of household power consumption by an end-user or by a utility supplier, or monitoring occupancy and activity within a household.  [CJF emphasis]

However, when intelligent customers protest AMI SMs as interfering with and depriving them of their U.S. Constitutional rights, state public utility commissions are the very ones to totally disregard such actions and apparent ‘constitutional crimes’.

Regarding constitutional RIGHTS, consider what President Bill Clinton, a lawyer (Yale Law School), had to say:

What’s the constitutional difference between being victimized by a state agency, e.g., public utility commission and their accommodating utility companies, versus being mugged, robbed or raped by some guy off the street?

The undeniable difference is the guy off the street will have the proverbial book thrown at him, whereas public service agencies and the entities they ‘regulate’ are permitted to run roughshod over the public (white collar crime) and their constitutional rights with no accountability due!

That’s undoubtedly what’s happened with the AMI SM fiasco in the USA because of ‘directives’ included in the United Nations Agenda 21 and Agenda 30 proffering global control, of which AMI SMs are an integral part for total global surveillance.  See 4 minutes on the timeline of this video for an explanation of Agenda 21.

All the hoopla utility companies give about AMI SMs not being surveillance devices, obviously is real “fake news”; we now have patent proof!