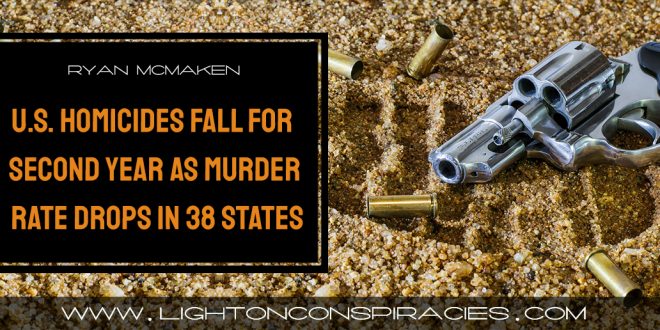 As 2018 came to an end, politicians and media pundits insisted that “gun violence” was growing and hitting crisis levels .

While a homicide rate of anything greater than zero is a measure of very-real human misery, it nonetheless turns out that fewer people were murdered in 2018 than in the year before. Moreover, 2018 was the second year in a row during which the homicide rate declined. 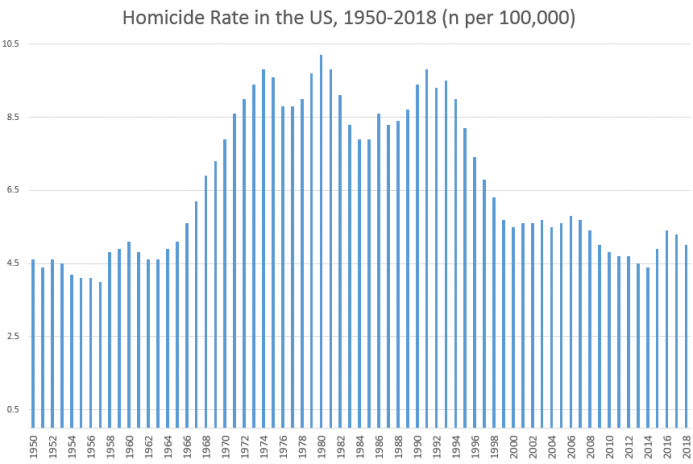 The regions with the largest declines were New England and the Mountain west where homicide rates decreased 18 percent and 12 percent, respectively. The only region reporting an increase was the Mid Atlantic region, with an increase of one percent. This was driven largely by an increase in homicides in Pennsylvania. 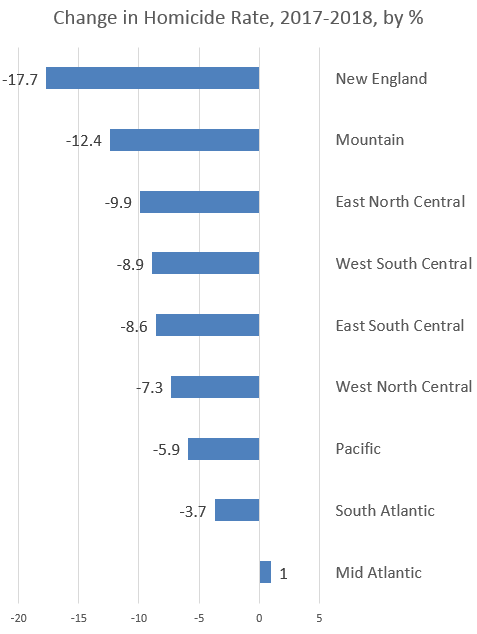 At the state level, the homicide rate went down in 38 states, and increased in 12. 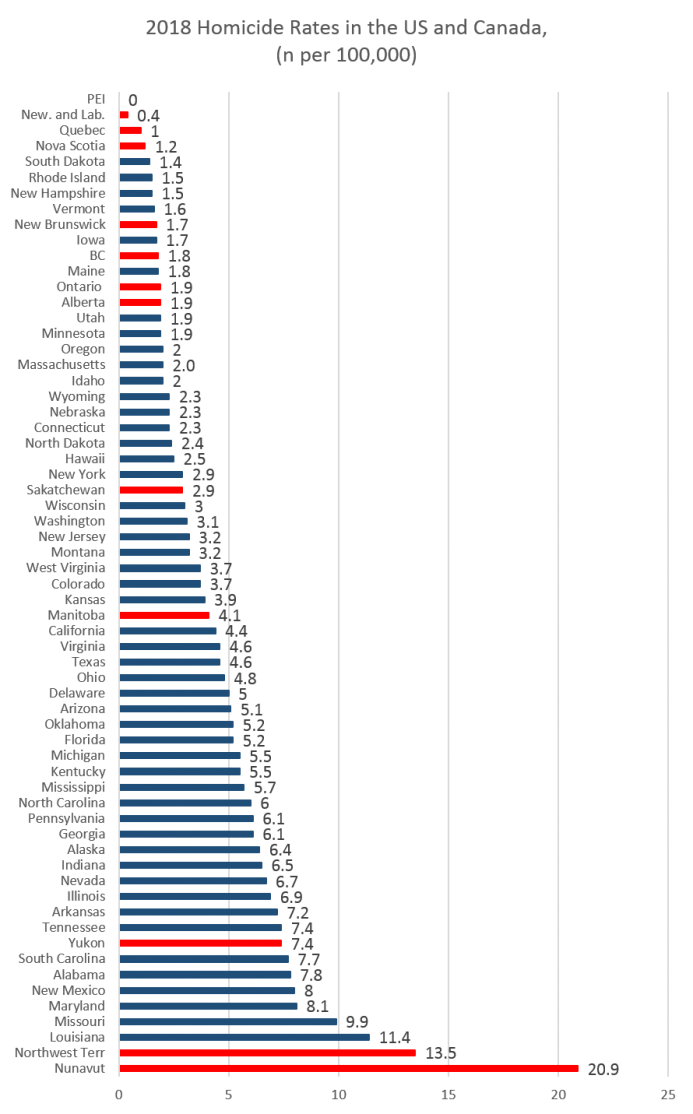 Indeed, when we map the states by homicide rate, we can see some clear regional differences: 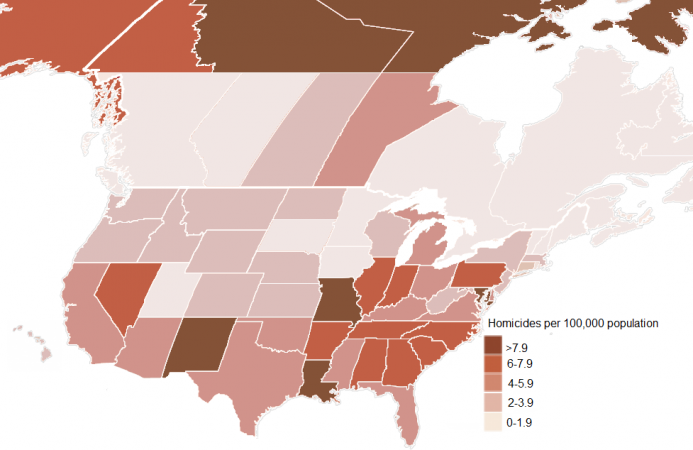 In American political discourse, it is fashionable to insist that those places with the most strict gun control laws have the least amount of violence.

This position, of course, routinely ignores the fact that large regions of the US have very laissez faire gun laws with far lower levels of violent crime than those areas with more gun regulations. Moreover, if we were to break down the homicide rates into even more localized areas, we’d find that high homicide rates are largely confined to a relatively small number of neighborhoods within cities. Americans who live outside these areas — that is to say, the majority of Americans — are unlikely to ever experience homicide either first-hand or within their neighborhoods.

We can see the lack of correlations between gun control and homicide, for instance, if we compare state-level homicide rates to rankings of state-level gun laws published by pro-gun-control organizations.

For example, using the Giffords Center’s rankings of state gun policy, many of the states with the lowest homicide rates (South Dakota, Maine, New Hampshire, Vermont, and Utah) are states with the most laissez faire gun policies. The Giffords Center naturally ranks these states the lowest for gun policy, giving Maine and Utah grades of “F” and “D-“, respectively, although both states are two of the least violent places in all of North America. 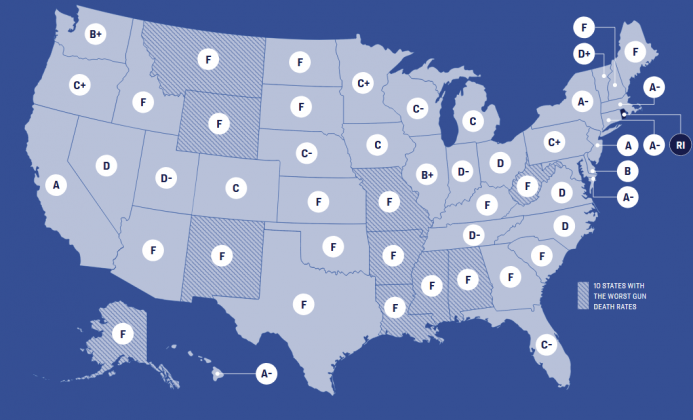 As is so often the case when dealing with gun statistics put out by pro-gun-control groups, the Giffords Center attempts to fudge the numbers by measuring “gun deaths” rather than homicides. By design, this number includes suicides — which then makes violence rates look higher — while excluding all forms of homicide not involving guns.

Thus, a state with higher homicide rates overall — but with fewer gun homicides — will look less violent than it really is.

Meanwhile, a state with little violent crime, but with relatively high homicide rates, will be counted as a state with many “gun deaths.” These nuances are rarely explained in the public debate however, and the term “gun deaths” is just thrown around with the intent of making places with looser gun laws look like they have more crime.

Moreover, the attempt to use suicide to “prove” more guns lead to more suicides is easily shown to be baseless at the international level: the US has totally unremarkable suicide rate even though it is far easier to acquire a gun in the US than many countries with far higher suicide rates.

As the total number of homicides in the US has gone down in recent decades, many commentators have taken to fixating on mass shooting events as evidence that the United States is in the midst of an epidemic of shootings.

Mass shootings, however, occur in such small numbers as to have virtually no effect on nationwide homicide numbers.

And then, of course, there is the issue of crime prevention through private gun ownership. Since only averted crimes are not counted in any government statistic, we only know how many homicides occur, but not how many are averted due to the potential victim being armed. Pro-gun-control advocates insist that the number is very low. But, again, there is no empirical evidence showing this. Some gun control activists will point to studies that conclude more homicides occur in areas with more guns. These studies may be getting the causality backwards, however, since we’d expect more gun ownership to result in areas that are perceived to be more crime-ridden.

Ryan McMaken (@ryanmcmaken) is a senior editor at the Mises Institute. Send him your article submissions for Mises Wire and The Austrian, but read article guidelines first. Ryan has degrees in economics and political science from the University of Colorado, and was the economist for the Colorado Division of Housing from 2009 to 2014. He is the author of Commie Cowboys: The Bourgeoisie and the Nation-State in the Western Genre.