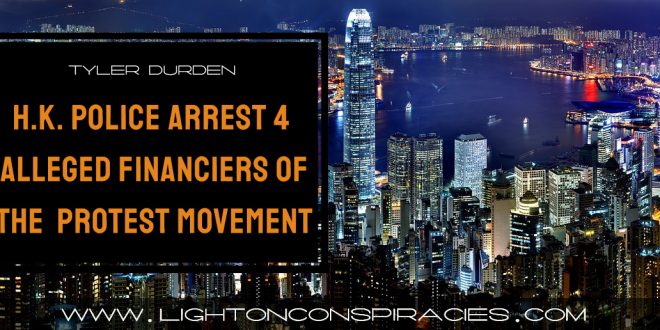 On Thursday, police in Hong Kong announced the arrests of several individuals whom they described as leaders of the Hong Kong protests movement. But these individuals (their identities have not been released) were not simply collared out in the street.

Instead, police described the four as leaders of Spark Alliance, a mysterious organization that has been one of the main financiers of the protest movement, including by bailing protesters out of jail and helping to defray their legal fees.

In a response posted to its FB group, Spark blasted the police, accusing them of deliberately trying to cut off one of the most important avenues of financing in the protest movement.

On Thursday evening, police announced the arrests of four people connected with Spark Alliance for suspected money laundering, the first cases brought over financing the demonstrations after six months of protests against China’s tightening grip over Hong Kong. Authorities froze HK$70 million of bank deposits and personal insurance products linked to the fund, while also seizing HK$130,000 in cash.

“The police attempted, through false statements, to distort the work of Spark Alliance as money laundering for malicious uses,” the group said in a statement on Facebook. “Spark Alliance condemns this kind of defamatory action.”

The arrests and seizures, as Bloomberg explains, shed light on the inner workings of the Hong Kong protest movement. Millions of Americans who have read the news reports about the protests have probably been left wondering how the protesters became so organized.

Well, this is how: Since the beginning of the movement, wealthy working HKers have observed their duty to help those battling it out on the front lines in any way possible. Mostly, they do it through donations to groups that purport to help bail out protesters after they’ve been arrested, or groups that simply provide food and shelter for the demonstrators, many of whom are teenagers, or in their early 20s.

This division of responsibilities is part of what’s allowed the movement to continue on for as long as it has.

But by cracking down on the money, HK police are essentially pulling the rug out from under Hong Kongers facing criminal charges for protest-related activities.

The impact of this crackdown is two-fold: not only will protesters counting on these funds to pay their legal fees be left out in the cold, but the renewed police scrutiny could deter some working Hong Kongers who have been supporting the movement with donations.

The crackdown deals a major blow to demonstrators as they face ever-mounting legal bills, with more than 6,000 people arrested since June. Spark Alliance, one of the largest crowd-funding campaigns supporting the protests, plays a crucial behind-the-scenes role – often sending anonymous representatives to bail protesters out of jail in the middle of the night.

The latest arrests risk deterring Hong Kong’s professional class from giving more cash, potentially curbing a substantial source of funds that have helped sustain the protests longer than anyone had expected. They also show the limits of the leaderless movement’s ability to manage tens of millions of dollars with little oversight outside of a formal financial system.

Funds bankrolling the protests have collectively raised at least HK$254 million ($33 million) since June, with 70% coming from just two groups, Spark Alliance and the 612 Humanitarian Fund, according to a tally based on disclosures from the groups and an analysis of publicly available documents. That figure doesn’t reflect all the money raised related to the protests, only the funds Bloomberg News could verify.

Before the arrests, most Hong Kongers didn’t know the identities of anyone behind Spark Alliance. Its website and bank accounts (before they were shut down) all forwarded to a Pest Control company.

But Spark proved its reliability early on by helping bail protesters out of jail. But the group has been under scrutiny even before the police got involved. Last month, HSBC shut down the group’s account, saying they had detected activity that differed from the stated purpose of the account.

“Spark is probably less transparent but people tend to believe them,” said Jason, a protester in his 30s who asked to be identified by his English name. He said he memorized the group’s phone number and called the group after he was arrested in August. Seven hours later, two lawyers helped arrange HK$4,000 in bail money.

“Everyone knows the cost to fight for this movement and not everyone can afford lawyer fees,” he said. “We need protection.”

Over the past few months he’s raised half a million dollars for Spark Alliance and other charities through the sale of Hong Kong-themed figurines, including a miniature Carrie Lam and a masked protester. Asked on Thursday night if he would still give the money to Spark Alliance, Jason said he wanted more information on the arrests.

The shadowy nature of some of these organizations has helped the Chinese government portray the protests as having been financed by foreign powers like the US. Of course, these accusations aren’t entirely without merit. Beijing threatened sanctions this month against the National Endowment for Democracy, a US-based group which donated $686,000 to various Hong Kong nonprofits in 2019.

Meanwhile, the June 12 fund has already spent roughly a quarter of the money it has raised since June, mostly on legal expenses and bail.

For many of the thousands of protesters who have been arrested, the criminal penalties that they could face without adequate legal representation could land them in prison for years.

Without having the support of knowing their bail will be paid in the event of an arrest, many demonstrators wouldn’t be so eager to fight their way past police barricades and take other risks like that.

But many members of the protest movement believe the 612 fund is too stodgy in how it operates. Most see organizations like Spark Alliance as being closer to the true ideals of the movement.

The 612 fund has been chided in online forums for deploying only 24% of the money it raised while asking protesters to first apply for legal aid from the city. Other critics see the 612 fund as part of an older political establishment in Hong Kong that has failed the younger generation of democracy advocates, and they believe Spark Alliance is closer to protesters in the trenches.

“The younger generation doesn’t trust in any institutions, not even those that advocate for democracy,” said Patrick Poon, a researcher at Amnesty International in Hong Kong. “It’s an irrational decision to trust in a group believed to be closer to the people on the ground even if they don’t know who is behind the fund.”

Ng, a 612 fund trustee, said the group is supported by “members of the public that are incensed by what is being done by police and government.”

“The movement is ongoing and we are using the funds for the stated purpose of humanitarian aid,” she said. “We don’t have any obligation to spend all the money immediately.”

Now that police have set their sights on Spark, we imagine a new group will need to come forward and take up the mantle of the protest movement, or risk allowing it to fizzle out.

This article was sourced from Zerohedge.com

Share
Previous Night Flight – The Other Review
Next Dodging Bullets on the Path to a Decentralized Future: 2019 in Review