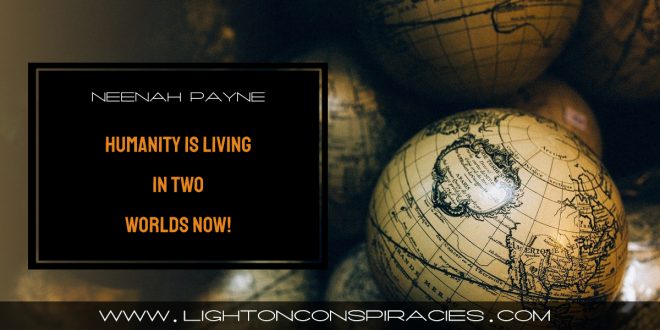 People are living in two very different worlds now. In one world are people who rely on the corporate media for information. They are bombarded with stories of a “global pandemic” that could kill millions unless we stay in a lockdown, wear masks, social distance, get tested, and get the COVID vaccine.

These people support the policies and may insist that their family, friends, neighbors, and co-workers follow them. They are afraid of catching COVID and dying, frightened of what the government will do or what their neighbors might think if they don’t follow the rules. They value safety above all else and are willing to surrender their freedom. They see Bill Gates as a benevolent philanthropist whose only goal is to save humanity. They trust Anthony Fauci. They see obedience to authority as a virtue.

However, people who get their information from reliable alternative media sites like Natural Blaze, Activist Post, Del Bigtree’s The Highwire, and James Corbett’s The Corbett Report are living in a very different world. They know the CDC statistics show COVID-19 threatens less than 1% of the population. They understand the lockdown is unnecessary and destructive. They know many doctors say masks are unnecessary, don’t work, and cause serious harm. They are not afraid of COVID, the government, or their neighbors. They value freedom and their constitutional rights above all else. They refuse to wear masks and won’t get the vaccine.
These folks are aware of the conflicts of interests that Gates and Fauci have in ignoring five proven cures for COVID-19 and trying to force everyone – including healthy people – to get a rushed unnecessary, potentially gene-altering vaccine. They know Bill Gates is not a doctor and was not appointed or elected by anyone. So, they don’t see why he should be in charge of world health. They see following the truths established by real science as a virtue. They agree with Thoreau that it is not only our right to disobey an unjust law, but our duty.

“Allow it to totally die, so that we may create a New Man & a New Earth. My friend, be very careful about what you give your attention and energy. There is so much that is unimportant and just serves to draw us into the drama of a dying world. For that is what is happening. The Old World is dying and a New Earth is being born.

There are changes brewing that are soon to make all the surface-level political theater meaningless. I invite you to both zoom out to see the big picture and zoom in and therefore see what is happening beneath the surface. The drama you see in the media and on social media about elections and politicians is really not important and is only the tiny surface of what is going on behind the scenes in our world.

Something is happening that is far bigger than mere politics, bigger than Trump or Biden. This is much bigger than we can imagine. There is an awakening happening in humanity. This is a spiritual evolution in consciousness long in the making coming into fruition. Humanity as a whole, and many people who have been deeply asleep, unconscious, ignorant are beginning to wake up and see that they have been living in an illusory world, a world based in untruth.

This inner awakening in more and more people is manifesting outward (as all things begin in consciousness and then are experienced without) in every aspect of our civilization. As the light grows, the darkness is revealed and all that humanity has pushed under the rug and hidden in their unconsciousness is rising up to the surface so we can see it and then make a decision about who we choose to be and what kind of world we wish to create.

This is something that has been prophesied by many seers from ancient civilizations. That in these times we are in now there will be a Great Shift to a totally new experience on Earth after thousands of years of living in ignorance, limitation, fear, and separation.”

See more articles at: Category: The Story of the New Earth

Which World Do You Choose?

Gigi says leadership completely changes when there is a spiritually evolved and awakened population. As people evolve, politicians realize citizens are not expecting officials to solve their problems because people take on more responsibilities to solve their own problems.

Gigi says people who are not sovereign (self-respecting) accept narratives that don’t serve humanity. The COVID “health” policies are an example. Gigi says if we keep playing into the system, it will not change. However, we can build a new civilization with our choices every day. Gigi explains that when we change our minds, we change the world.

Gigi says the first step to raise your consciousness is to unplug from social media which creates a constant sense of urgency. She says people won’t be uninformed if they don’t watch TV news or check social media every few minutes. She says we are most informed when we know what’s going on within ourselves emotionally and mentally. Gigi says just taking a five-minute walk or reading quietly for five minutes can help shift your consciousness.

Mental health professionals featured in Plugged In: The True Toxicity of Social Media Revealed echo the dangers, saying that “No phenomenon in recent history has fundamentally changed us to a greater degree than social media. What might seem like an innocuous means of passing time and staying in touch with old friends is actually destroying us.”

The Social Dilemma documentary says: “Never before have a handful of tech designers had such control over the way billions of us think, act, and live our lives.”

See The Social Dilemma Virtual Tour: February 25. Register for DIGITAL RIGHTS ARE HUMAN RIGHTS: The continued threat of Big Social’s business model which will air on February 25 from 1-2 PM Eastern Time with human rights experts and unreleased clips from the Netflix documentary The Social Dilemma. Tech insiders explain how their products are causing unintended serious harm to people and society.

The Tour is a series of conversations with people who are building a humane tech future. They are helping us understand the impact of the dilemma and are working on solutions. In a time when technology has become our lifeline, it is more important than ever that we examine the role it plays in our lives and realign it with the interests of people, not profits.

The Dark Journalist pointed out that Big Tech is now obsessed with suppressing freedom of speech protected by the First Amendment. He says Twitter is one of the worst offenders. Both he and Gigi are switching to Telegram. If Big Tech is stealing their data and removing them from social media, self-respecting people will ask how many acts of disrespect they will accept before they tell them “I won’t be treated this way. I’m going to do something else now.”

Gigi says our choices now will determine our fate as there are growing plans to merge humanity with Artificial Intelligence. Ray Kurzweil, Google director of engineering and author of The Singularity Is Near: When Humans Transcend Biology, presents transhumanism as a step in evolution – that being an AI-hybrid is better than being human. Elon Musk, founder of SpaceX, CEO of Tesla, Inc., and co-founder of Neuralink, is proposing to link our brains to AI.

Gigi explains that people who don’t want the transhumanist future will move to smaller communities to farm and live the way we used to. They are going to regain a lot of the knowledge our ancestors had and build a stronger society.

Incidentally, in The Battle For Humanity, Dr. Carrie Madej warns that the purpose of the COVID vaccine with the unprecedented mRNA chip is twofold: To reprogram our DNA to make us human/AI hybrids that will be easier to control and to implant a Digital Vaccine ID that will allow total control over each person and accommodate the tranhumanist future laid out above.

William Henry’s site says: “William Henry is an author, investigative mythologist, art historian, and TV presenter. He is an internationally-recognized authority on human spiritual potential, transformation and ascension.”   The site describes his ebook The Skingularity Is Near: “The book title is a word play on ‘Singularity’, when the machines we are making become artificially intelligent, totally aware and take over. It is the ‘elephant in the room’ few are presently talking about, but everyone soon will be discussing.

As William sees it, two ‘elephants of transcendence’ are now before us. One grey. One pink.

Grey or pink? We each can only make one choice. Doing nothing is not possible for reasons that will be explained. We are living THE TURNING POINT all of history has been rushing towards. The future of humanity IS IN OUR hands.

Note: “Pink” is code for “human” and includes peoples of all colors. The Skingularity Is Near quotes Einstein who said, “In order to solve our current problems, the next human will have to emerge.”

Henry’s must-see video talk explains the stark choice humanity faces now and the opportunity we have to evolve as all the ancient cultures advised. Henry explains that the answer to Artificial Intelligence is Ascension Intelligence.

Henry warns that people need to be aware of the choice we are making now because there is no turning back! He says people who promote Artificial Intelligence present flesh and blood beings as a virus — a threat that consumes the natural resources and a threat to the planet. Their conclusion will be that biological beings should be wiped out.

That is already happening both with the “global warming” mantra that portrays humanity as a threat to life on Earth and with the COVID-19 “health” policies which say that even healthy people can be “asymptomatic carriers” of the “deadly virus” and must wear masks and social distance from others.

However, those who stand in opposition to this vision, are promoting The Greater Reset. The Greater Reset: Inspiring Vision For Humanity shows how this shift has already begun. The first week of The Greater Reset was held online in January. Recordings are available for free for Day 1 (Agora), Day 2 (Health), Day 3 (Nature), Day 4 (Digital), Day 5 (Community), and Bonus Day. See speakers and topics at: https://thegreaterreset.org/sessions/. The article explains steps you can take now. The second week will be held online on May 25-28. Mark your calendar now and check the Activist Post site in May for the announcement.

The Sudden Move To Freedom States

Another sign of this movement toward freedom was noted by The Dark Journalist where we can see a shift from tyrannical states like California and New York to states like Texas and Florida now. This is shown in the chart below. People are voting with their feet! The move to these states reflects the shift as humanity creates a more positive future in a variety of different ways. Share
Previous Love Is – Accounts of scientists and campaigners of what happened in 2020 and why.
Next Ole Dammegard amazing interview