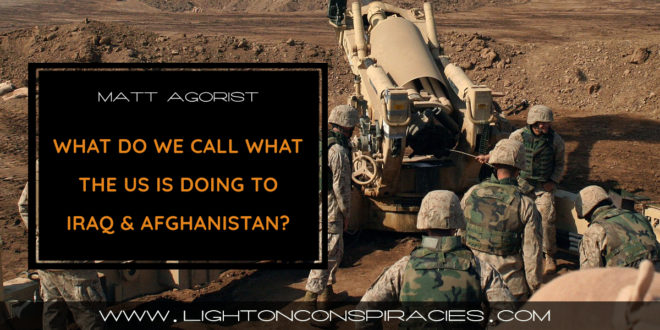 If We Call Russia’s Invasion a War Crime, What Do We Call What the US is Doing to Iraq & Afghanistan? For decades, the US and its Western allies have been violently and frequently meddling in the Middle East. Beginning with the clandestine overthrow of democratically elected leaders, moving on to financing violent extremist groups, and morphing into full blown invasions of entire countries, the Middle East has been the target of destruction since at least 1953.

On March 20, 2003 the United States launched one of its most brutal and murderous assaults in history as American military forces invaded the sovereign nation of Iraq. America was not asked to be there, no one from Iraq attacked the US, and the entire invasion and subsequent slaughter was based entirely on lies.

As we reported years ago, a bombshell in the form of a leaked classified report—a “smoking gun” if you will—confirmed the utter deception carried out on the American people to support the invasion.

Turns out there were never any weapons of mass destruction and the tens of thousands of slaughtered civilians — turned into a fine red mist by US missiles — were murdered over the lies of a few individuals that were echoed by all mainstream media ad nauseum.

In May 2004, one year after the U.S. commenced a full-scale invasion of Iraq, the New York Times issued a half-baked apology for its abysmal coverage of the “intelligence” used to convince America that Iraq was a threat.

“Looking back, we wish we had been more aggressive in re-examining the claims as new evidence emerged — or failed to emerge,” wrote the NYT editors. They also lamented their dependence on Iraqi defectors who made spurious claims to further the goal of regime change, like claiming Saddam Hussein was murdering babies.

By the time enough Americans realized they’d been duped—with the help of mainstream media from The New York Times to Fox News—it was too late. Cheney, Rumsfeld, Wolfowitz and other neocons hailing from the notorious Project for the New American Century (PNAC) had their agenda of military hegemony well underway, which is still going strong today.

Their propaganda campaign was so effective that at one point during the Iraq invasion, 70 percent of Americans believed it was Iraq who attacked us on 9/11. Seriously.

In just the first couple of months of the war, thousands of innocent civilians died at the hands of the military-industrial complex. Yet the mainstream media was parading the war on television as a great act of American heroism, necessary for maintaining the free world. This couldn’t be further from the truth.

As America patted itself on the back, the rest of the world saw the invasion for what it was, a brutal occupying force illegally invading another country while committing rampant war crimes.

Now, 19 years after that blood-soaked campaign began, the US is accusing Russia of war crimes as if this country’s past has been forgotten. Make no mistake, Russia’s invasion of Ukraine is brutal, illegal, and wrong and many of the acts committed in Russia’s name should certainly be considered and investigated as war crimes.

But what Russia is doing in Ukraine pales in comparison to what the US did in Iraq, meaning that the US establishment — especially those who played a key role in the invasion of Iraq — have no business accusing any country of any war crimes without first looking in the mirror.

While the civilian death toll climbs to 900 in Ukraine, by this time during the Iraq invasion, the US had slaughtered thousands. Again, this is not to discount the crimes of Russia but only to make a point that the US has a track record in the last 22 years that completely negates any claims of exceptionalism or righteousness.

It’s not just Iraq either. Currently, US acts of war against Afghanistan — known to Americans as “sanctions” — are driving 22 million people to starvation. Thousands of children have already died in the first three months of 2022 and according to multiple reports, it is estimated that more people will die from the economic impact of sanctions over the next year than the number who died in 20 years of war.

David Miliband, former British foreign secretary and head of the International Rescue Committee, which has 3,000 staff in Afghanistan, told the U.S. Senate last month: “The proximate cause of this starvation crisis is the international economic policy which has been adopted since August, and which has cut off financial flows not just to the public sector, but in the private sector in Afghanistan as well.”

As the US government tugs on your heart strings for Ukrainian children, they are slaughtering tens of thousands of children in Afghanistan and Yemen.

But you’re not supposed to know this, which is why those who expose war crimes rot in cages like Julian Assange. This is why former drone pilot Daniel Hale, who exposed the United States’ murderous drone and targeted assassination program, is locked in a concrete room as the presidents who carried out this murder enjoy their lavish mansions and taxpayer-funded pensions.

At a recent symposium of journalists, remembering the United States’ invasion of Iraq, Peter Van Buren, a former US State Department official based in Iraq for a year, was asked about whether the Western media had learned its lesson from Iraq. He responded by accurately drawing a parallel with the current Ukrainian crisis:

“Lessons learned? No. La [‘no’ in Arabic]. Nyet [‘no’ in Russian]. As a State Department officer in 2003, I watched in horror as the mainstream press acted not only as stenographers for government lies but amplifiers of those lies, employing anonymous sources at the expense of their own credibility to create and then service a narrative demanding war. When their true editor-in-chief, George W. Bush, stood up, a mix of Ben Bradley and Lou Grant, to proclaim ‘you were either with us or with the terrorists,’ the media stifled dissent in their ranks nearly completely. In 2022, little has changed. The media again beats the drum for war, albeit this time as stenographers for the Ukrainian government’s propaganda. Almost all of the video and imagery out of Ukraine comes from their government and those anonymous sources of 2003 have been replaced by no real sourcing at all. Crushing dissent has caught up with the times, so voices for restraint are not just left off the New York Times op-ed page, they are canceled, deplatformed, and sent down the social media memory hole, unemployable as Putin-lovers.”

We cannot afford to have such short memories as our failure to remember allows mass murderers not only to walk free but to be celebrated in history books. We have to be better than simple talking points and insults meant to write off those who question the official narrative and march to war.

Critical thought and peace are key to humanity’s survival and until enough people grasp that concept, war is what we’ll get.