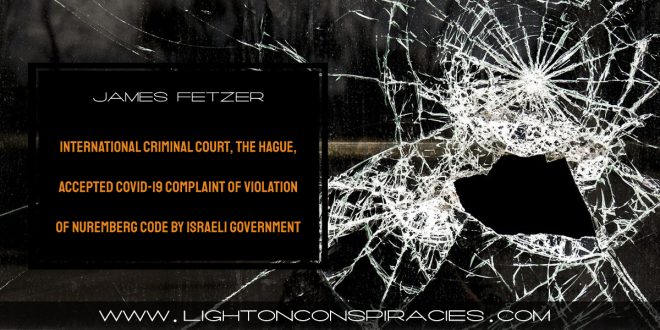 Last weekend, a complaint from the organization “People of Truth” was filed with the Hague Tribunal by lawyers Ruth Machnes and Aryeh Suchowolski, of the law firm A. Suchovolsky and Co., concerning violations of the Nuremberg Code by the Israeli government and other parties. However, the complaint filed last week before the International Criminal Court was accepted. It is now awaiting a decision.

Lawyer Ruth Machnes told Israel News on 5 March that “at the same time, the complaint will also be filed in the Nuremberg court, along with German lawyer Reiner Fullmich. On Monday, the complaint will be filed in the High Court by Aryeh Suchowolski in Israel, concerning the violation of the Nuremberg Code. The lawyer added six days later: “Pfizer’s experience in the State of Israel was conducted in violation of the Nuremberg Code, which is part of international criminal law and is under the jurisdiction of the Hague court. We are now awaiting a decision. »

The complaint filed with the court reads

We are speaking to you on behalf of the Anshei Emet Association, an association in the making, whose members are lawyers, doctors, public activists and in general, who have chosen to exercise their democratic right not to receive experimental medical treatment (Corona Immunization), and who believe that great pressure, harsh and illegal, is exerted on them on behalf of the Government of Israel, members of the Knesset, ministers, elected officials of the public, city leaders and more.

The letter of acceptance of the International Criminal Court, signed by Mark Dillon.

We want to start with basic knowledge on the subject: Corona vaccine is an innovative medical treatment, which has only recently obtained FDA approval in the United States (as part of an emergency procedure only), an approval that is not final and with details on 22 side effects of the vaccine. In addition, it is clear to all medical factors that the subject of the long-term influence of the treatment has not been scientifically tested (tests and research), and the long-term effect and safety of the treatment on its recipients are unknown. It is important to note that never before have immunisations been administered worldwide by this medical technology introducing a synthetic M-RNA into the body, and all previous immunizations have worked in a totally different way, by introducing a weakened or weakened virus and natural arousal of the immune system against it. As detailed by a senior virologist, the risks anticipated by this innovative medical treatment are attached in Appendix 1 to my letter.

(a) Informed consent to participate in a medical experiment — a first principle of the Nuremberg Code is the willingness and informed consent of the person to receive treatment and participate in an experiment. The person is supposed to activate freedom of choice without the intervention of a factor using force, deception, fraud, threat, solicitation or any other type of liaison or coercion. When the heads of the Ministry of Health and the Prime Minister presented the vaccine in Israel and began vaccinating Israeli residents, the vaccinated have not been informed, that in practice they are participating in a medical experiment and that their consent is required for this purpose under the Nuremberg Code, and only when it became clear that the Prime Minister had actually signed an agreement with Pfizer (the manufacturer), it was first published and also stated by the Prime Minister, that it was indeed a medical experiment, and that this was the essence of the agreement. It is in fact a genetic medical experiment on human beings, carried out without informed consent and under a serious and flagrant violation of the Nuremberg Code.

b) The Bibi-Pfizer Agreement. After factum, it became clear that the Prime Minister of Israel signed an agreement with the Pfizer Company (the manufacturing company), under which he will receive a huge amount of millions of servings of vaccines, and with a preference over other countries, and in return, the vaccinated (residents of Israel) will serve as “experimenters” for the pharmaceutical company. It was agreed that the pharmaceutical company would receive all of Israel’s secret medical and personal information without its knowledge or prior consent. In addition, we must declare that until this time, the content of the agreement concerning most residents of the State of Israel, has not been published, which is mandatory transparency under the law, and it was published with “blackout” / concealment of a large amount of information included in this agreement. It should be said and remembered that we do not live in a country of dictatorship, so that obviously such an agreement must be subject to full transparency to the general public.

c) Alternative treatments. With regard to informed consent for medical treatment, and on the basis of the principles of the Nuremberg Code, there is an obligation to detail and suggest to a patient several alternative treatments, also detailing the medical process (and all that is included). such as the pros and cons/benefits and risks, existing in each treatment, to enable him to make an intelligent personal decision regarding the treatment he prefers. As stated, this must be done without exerting pressure and freely, as a free person. Despite all the above, the State of Israel and the Ministry of Health do not present to Israeli citizens the existing alternatives to treat Corona disease, which have proven to be effective and with few side effects, and not dangerous ones. They solicit and pressure citizens (while blatantly violating the informed consent process), conceal information about vaccinations and create a severe atmosphere of fear and coercion.

(d) A fourth principle is that the experiment will be conducted to avoid physical suffering or injury. Treatment is known to have caused many people’s death, serious injuries and damage (including disability and paralysis) after the vaccine was administered. Despite this fact, the government did not order an investigation into the matter. It is interesting to note that the Ministry of Health has openly admitted that 41% of police, military, educational and medical personnel, who had been vaccinated, suffered serious side effects and were putting their lives at risk. It is also surprising that there are no complete reports on the number of deaths or injuries, as can be expected in such a medical process for the benefit of the public participating in the experiment.

(e) A fifth principle states that the experiment should not be conducted where there is reason to assume that actual death or injury will occur. Regarding the violation of this principle, see above. As noted, when it comes to data on deaths, we only hear by word of mouth on social networks (by friends, neighbours or relatives) and not on the central media.

(f) An additional principle is that the factor responsible for the experiment will be prepared to stop it at any stage if there is a reasonable reason to assume that it will cause injury, disability or death of the experience participant. It has already been proven that many people died from treatment, were injured, became disabled and paralyzed; however, the Israeli government continues to impose this dangerous experience on Israeli citizens.

(g) Recent publications demonstrating gross and criminal violations of the Nuremberg Code on behalf of the government, ministers and knesset members, city leaders and senior civil servants, as well as employers:

Below are some examples (among many others) of violations of the Nuremberg Code (which will be attached to Appendix 2 of my letter).

The exercise of social pressure:

The Israeli Prime Minister has repeatedly stated that Israeli citizens are participating in this innovative medical experiment for the benefit of all the citizens of the world, who, for whatever reason, are not rushing to get the aforementioned medical treatment, and they are eagerly awaiting to see the Israeli experimenters. The same is true of the government’s agreement with Pfizer, which has been overshadowed in many places, raising questions about the government’s agreements with Pfizer.

It is now pointed out that the means currently activated against citizens, including the proposed legislation against anyone who has not been vaccinated, contradict not only the Nuremberg Code and the autonomy of the individual over his body, but also the legislation in force in Israel, including the Basic Law on the Dignity and Freedom of Persons. , the Freedom of Occupancy Act, the Patient Rights Act, the Equal Works of Opportunity Act, the Prohibition of Discrimination in Goods, Services and the Access to Entertainment and Public Places Act, and other laws.

Therefore, and in light of the above, we make two main requests to your honour:

Therefore, any subsequent correspondence should only be sent to the postal and/or electronic addresses listed above. Any notification within the meaning of the Statute of the Court addressed in this way will be considered valid.

ONCE FILED AND PROCESSED

If Israelis are confused by the fact that their government treats them like laboratory pets, if they wonder why their freedom to travel, to socialise or even earn a living have evaporated, Pfizer CEO Albert Bourla produced a genuine answer yesterday. In an interview on NBC Bourla said:

“I believe Israel has become the world’s lab right now because they are using only our vaccine at this state and they have vaccinated a very big part of their population, so we can study both economy and health indices.”

I have no issue with medical experiments involving humans if the participants are fully aware of all possible circumstances and considerations involved in their consent. This didn’t happen in Israel. By means of ‘green passports,’ the government practically threatens to penalise anyone reluctant to participate in a ‘lab’ experiment for a giant pharmaceutical company with a very problematic record.

The results of this Pfizer-Israeli experiment aren’t necessarily encouraging. Though it may be possible, as some studies suggest, that most vaccinated people have at least short-term protection from Covid-19, no one can deny the astonishing fact that in just 8 weeks of mass vaccination the total number of Covid-19 deaths in the Jewish State almost doubled from the number accumulated in the prior ten months. Read more at https://www.unz.com/gatzmon/hot-off-the-press-pfizer-ceo-albert-bourla-admits-israel-is-the-worlds-lab/

In an internal letter leaked to the Israeli press, Shashua revealed that Mobileye expects about 10 percent of workers to refuse the COVID-19 vaccine, the Jerusalem Post reported Wednesday. Read more at https://www.lifesitenews.com/news/israeli-company-prohibits-employees-from-returning-to-work-without-covid-19-vaccination

In Israel, refusing coronavirus injection means life is over

“When you don’t take the vaccine, your life is basically over,” warns Ilana Rachel in a video about what is taking place in the Holy Land. https://www.newstarget.com/2021-03-10-israel-refusing-coronavirus-vaccination-means-life-over.html