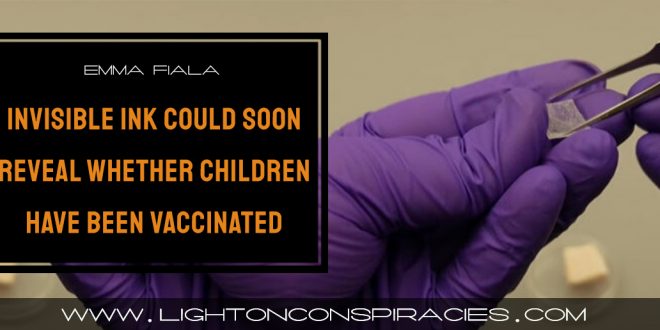 Invisible Ink Could Soon Reveal Whether Children Have Been Vaccinated

Natural Blaze Editor’s Note: Clearly we think this is an absolute nightmare, but we need to hear exactly how this is being marketed. Of course, the Bill and Melinda Gates Foundation is right at the center. As the author does note, this tech has uses far beyond tracking the vaccinated.

If you’ve ever lost of track of whether or not your child was vaccinated for any one of the diseases current vaccines are supposed to prevent the spread of, science has something for you.

Thanks to researchers at the Massachusetts Institute of Technology (MIT), vaccine data can now be embedded directly into human skin, as reported by Scientific American. What more could you want?

Maintaining accurate vaccination records is a challenge around the world—especially in the developing world—due to lost paperwork, communication and clerical errors, or simply forgetting. In fact, Smithsonian Magazine reports that “Inconsistent record keeping is thought to play a large role in the 1.5 million deaths” each year.

Mark Prausnitz, a bioengineering professor at the Georgia Institute of Technology not involved in the study, explained:

Especially in developing countries where medical records may not be as complete or as accessible, there can be value in having medical information directly associated with a person.

Figuring out how to keep better track of vaccination is incredibly important from a health systems and public health perspective.

The researchers use a dye that is invisible to the naked eye but can be seen with a—wait for it—mobile phone camera filter, much like a QR code. The dye would be injected into a child’s skin via microneedles at the time of vaccination and would last for up to five years.

The new system is still in the early stages of development and has not been tested on actual children, but it has successfully been used on both pig and rat skin as well as human skin in a dish.

According to MIT bioengineer Ana Jaklenec, the “biggest challenge” the researchers faced was finding a safe and long-lasting dye. After testing various dyes and finding none that held up after being exposed to sunlight, the research team settled on quantum dots. The tiny semiconducting crystals were first used by researchers to label cells and has been “shown to be safe in humans,” according to Scientific American.

Prausnitz also highlighted that a system like this must be discreet and the patient, or the patient’s family, must agree with the method. He believes this new system “is a pretty interesting way to accomplish those goals,” but that some patients may have privacy concerns when it come to “carrying around personal medical information on their bodies.”

Different people and different cultures will probably feel differently about having an invisible medical tattoo.

Klass also pointed out that this system of record keeping “could be ripe for misinterpretations and rumors,” especially in developing countries with a history of having been taken advantage of by Western medical powers.

But it turns out privacy was actually a concern of the MIT researchers. They aimed to avoid technology that would potentially cross a line into an invasion of privacy such as iris scans or databases with personal information that would render patients identifiable.

Although, it doesn’t take much imagination to see where vaccine data embedded into skin via scannable dye may lead. Perhaps someday we’ll see infrared light scans at entrances to school buildings or as part of the TSA privacy invasion process when traveling.

Alternately, Ruchit Nagar, a student at Harvard Medical School, is hoping to create a different system for tracking medical information such as vaccination records. The system involves wearing a necklace that uses the same technology as radio-frequency identification (RFID) chips. Information such as pregnancy history, growth charts, and vaccination records would be encrypted and password protected.

The Bill & Melinda Gates Foundation funded the MIT researcher’s work after a direct request from Bill Gates for such technology, and it was published Wednesday in Science Translational Medicine.

In the end, the researchers just “want people to be comfortable,” says study author and Rice University bioengineer Kevin McHugh.

“The goal is widespread adoption.”