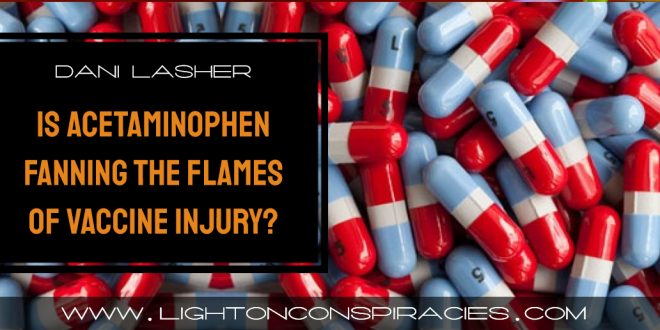 Is Acetaminophen Fanning the Flames of Vaccine Injury?

Outdated recommendations to medicate children during periods of vaccination are doing more harm than expected. A decades-long recommendation, the science is far clearer now: acetaminophen, commonly known as Tylenol, and vaccines don’t mix.

To understand acetaminophen’s impact, we must understand glutathione peroxidase. This critical sulfur-based antioxidant is naturally produced in our bodies. Much of it hangs out in our brains. This is the antioxidant that neutralizes toxins and their byproducts to prevent damage to our DNA.

When glutathione is in short supply, we see detrimental outcomes. This is particularly true among children carrying mutated copies of the SNP methylenetetrahydrofolate reductase (MTHFR) gene. Individuals carrying at least one abnormal copy of this polymorphism tend to have lower levels of glutathione. Those diagnosed with autism, an injury linked to vaccinations, also have substantially lower levels of serum glutathione.

In a nutshell, not having enough glutathione places the human body at serious risk of an adverse event when it is assaulted by vaccines. Acetaminophen, also known as paracetamol, adds fuel to the fire of vaccination as it wipes out glutathione stores.

The Effects of Acetaminophen Alone

To be clear, acetaminophen comes with its own risks independent of vaccines. While autism is a concern, and several studies have confirmed its association with acetaminophen use, it doesn’t stop there. A JAMA study on hyperkinetic disorders noted,

“Children whose mothers used acetaminophen during pregnancy were at higher risk for receiving a hospital diagnosis of HKD (hyperkinetic disorder), use of ADHD medications, or having ADHD-like behaviors at age 7 years.”

Another study, published in the International Journal of Epidemiology, found that children who were exposed in utero to acetaminophen on a long-term basis expressed significantly more negative developmental outcomes by their third birthday when compared to siblings who had not been exposed to the drug.

Young children are particularly vulnerable to injury from drugs and toxins because their blood-brain barrier is not fully developed. Another JAMA study remarks,

“Research data suggest that acetaminophen is a hormone disruptor, and abnormal hormonal exposures in pregnancy may influence fetal brain development.”

Of specific concern is the economic burden of surging diagnoses. A review published by Hormones and Behavior touted that prenatal acetaminophen exposure had strong ties to neurodevelopmental disorders, with emphasis on the “substantial public health implications.” This issue is a global problem and one that warrants prompt attention.

This evidence is concerning in an age where at least two vaccines (influenza and Tdap) are being pushed on every pregnant woman, despite the lack of safety testing for their use. The potential to harm future generations is enormous. A study published in Human Reproduction found “an association between the timing and the duration of mild analgesic use during pregnancy and the risk of cryptorchidism.” (undescended testicles)  The results showed impaired masculinization related to anti-androgenic effects, leading researchers to conclude that prenatal use of these pain relievers could play a causative role in reproductive issues among men.

Medical professionals continue to encourage the concurrent use of vaccines and acetaminophen. What could go wrong? We’re seeing the effects of this poorly researched recommendation now, and it’s clear that the potential harm from this pain reliever starts when a child is still in utero and extends into the formative years.

Vaccines contain ingredients that aren’t supposed to be in our bodies. Yet vaccination does just that — it keeps many of these known toxins in place, even in the brain. Aluminum is one such adjuvant that remains in the body post-injection. Why? An Entropy study reported,

“Chronic aluminum exposure in rats induces depletion of glutathione in the liver.”

When we inject aluminum into a developing child, the result is an accumulation of this neurotoxic metal in the brain because the body doesn’t have enough glutathione to eliminate it.

Other vaccine ingredients, such as thimerosal, are concerning. A study published in 2007 found that glutathione within dendritic cell structures is depleted by thimerosal. That same Entropy study noted that glutathione also plays a key role in eliminating drugs, such as acetaminophen, through the liver. The evidence supporting a need for glutathione to carry out detoxification is pervasive.

But your doctor says acetaminophen is safe, right? One study found that doctors are roughly 17 years behind on current research.

Certainly, acetaminophen’s role alongside vaccines is only part of the equation in the depletion of glutathione.

ASD kids’ relatively high risk of injury from vaccine adjuvants may very well be rooted in a problem with a particular gene. A JPANDS study remarks, “Notably, only 2% of children with ASD in our study presented without at least one polymorphism in the MTHFR gene.”  MTHFR is an abbreviation for an enzyme whose official name is methylenetetrahydrofolate reductase (MTHFR).

A low level of glutathione in populations with MTHFR mutations puts them at greater risk of injury. There is strong evidence that the mutation plays a significant role in the development of autism. The aforementioned Entropy study asserts,

“We propose that children with a diagnosis of autism are especially vulnerable to toxic metals such as aluminum and mercury due to insufficient serum sulfate and glutathione. A strong correlation between autism and the MMR (measles, mumps, rubella) vaccine is also observed, which may be partially explained via an increased sensitivity to acetaminophen administered to control fever.”

There is a significant proportion of children being harmed by a combination of vaccine adjuvants and acetaminophen as both deplete glutathione stores. A study published in  Metabolic Brain Disease recommends finding an alternative to aluminum as soon as possible due to the significant risk of injury in populations who have abnormal MTHFR polymorphisms.

The Downside of Medicating Inflammation Prior to Vaccination

Some components in vaccines aren’t supposed to be there at all, such as the contaminant mycoplasma pneumoniae. What is the effect of medicating a child after an injection that contains a cocktail of contaminants?

Recently, there has been a marked increase in the diagnosis of PANDAS/PANS, and many parents –  and even doctors – are associating the onset with getting vaccinated.  Mycoplasma is one of many bacteria now being evaluated as a cause of PANDAS.

If acetaminophen is given to a child prior to receiving a vaccination contaminated by mycoplasma, one could assume that the effect on the immune system may leave the child more vulnerable to a severe or persistent reaction, leading to a complex of neurological syndromes such as PANDAS, short for Pediatric Autoimmune Neuropsychiatric Disorders Associated with Streptococcal Infections.

Don’t suppress a fever when vaccinating

While ibuprofen for children six months or older is an option, and even the homeopathic Oscillococcinum, Ferrum phosphoricum, Arnica montana, and other remedies are available, we must question the purpose of using anything to reduce fever.

As you can begin to see, medicating with acetaminophen before or after vaccination isn’t a good idea. In fact, any effort to reduce a vaccination-related fever is reducing the immune response, thereby defeating the supposed purpose of vaccinating. Somewhere along the way we’ve blurred the lines of sickness and health.

Fever is a response to illness, not the illness itself.

An article in BMC Pediatrics states,

“Up to 60% of young children develop a fever after receiving the MMR vaccine. Fever is rarely harmful and only an extremely high fevers of 42.2C (108F) may cause brain damage.”

In 2009, the Lancet reported on a study which analyzed two consecutive randomized, controlled, open-label vaccination studies with 459 healthy infants who were enrolled from ten centers in the Czech Republic. Infants were randomly assigned using a computer-generated randomization list to receive three prophylactic paracetamol (acetaminophen) doses every 6-8 hours in the first 24 hours (n=226) or no prophylactic paracetamol (n=233) after each vaccination. The vaccines used were Synflorix, Infanrix Hexa, and Rotarix. One group was given three doses of acetaminophen in the first 24 hours following vaccination, while the other received none. The results were as follows:

In simple terms, that means vaccine antigens do not produce antibodies when acetaminophen or paracetamol is administered at the same time as a vaccine(s).

Further research supports these findings. A 2011 study titled Infant Sleep After Immunization: Randomized Controlled Trial of Prophylactic Acetaminophen published in Pediatrics noted changes in infant sleep duration and body temperature when acetaminophen was given with vaccines.

We have reviewed a few of many articles reporting the problem of giving acetaminophen around the same time as vaccines are administered.  There is substantial evidence that suggests this long-held practice of administering acetaminophen before, during or after vaccination is a detriment to overall health.

Note: The bulk of this research can be found in the Tenpenny Research Library

Dani Lasher is a writer, motherhood coach, and health advocate living just outside of Washington, DC. While passionate about informed consent and women’s birthing choices, she’s also slightly obsessed with city living and cooking. You can catch up with Dani at her site, BumpMama.com