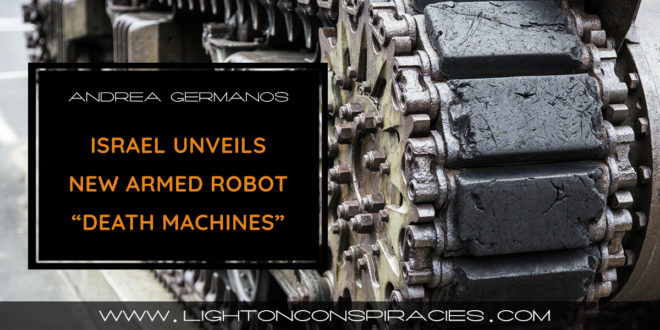 Israel unveiled a new remote-controlled killer robot Monday at a major weapons fair in the U.K. that human rights advocates are criticizing as an event to sell “death machines” and tools of abuse.

Developed by Israel Aerospace Industries (IAI), the Rex MK II is a four-wheeled vehicle mounted with two machine guns to carry out remote attacks. According to a press statement from the state-owned company announcing the release, the robot has already been sold to global customers.

The weapon was unveiled Monday at Defence & Security Equipment International (DSEI) in London, an event that occurs every two years and is one of the world’s biggest arms fairs. The weapons expo has faced sustained condemnation from anti-war campaigners who say it’s a venue “where those who profit from war, repression, and injustice do business.”

IAI describes the robot as an unmanned land vehicle that can carry a load of 1.3 tons and execute operations including intelligence gathering using “electro-optical sensors and radar.” It can also be used to launch attacks with “remotely controlled weapons systems including a 7.62mm machine gun” and “a cal 0.50 heavy machine gun,” the company says, and serve “as a multi-mission multi-purpose platform to support additional missions based on troops needs.”

The weapon represents “the most advanced of more than half a dozen unmanned vehicles developed by Aerospace Industries’ subsidiary, ELTA Systems, over the past 15 years,” and would join a similar unmanned robot weapon, the Jaguar, that Israel deploys along the Gaza border, the Associated Press reported.

Israel has faced international outcry and demands for war crimes investigations over its repeated military attacks on Gaza. Arms sales to Israel from countries including the U.S. and U.K. have also faced ongoing criticism from human rights advocates.

Such demand has fueled concerns about so-called “killer robots” and spurred a global campaign to ban such weapons.

“Fully autonomous weapons would decide who lives and dies, without further human intervention, which crosses a moral threshold,” the Campaign to Stop Killer Robots warns. “As machines, they would lack the inherently human characteristics such as compassion that are necessary to make complex ethical choices.”

Protesters with Palestine Action were among those taking part in demonstrations against the arms fair this week, targeting weapons manufacturers broadly and also singling out for condemnation the U.K. for its role in the global arms trade as well as Israel for its ongoing abuses of Palestinians.

The Stop the Arms Fair coalition is set to hold a “remembrance ceremony” Tuesday outside the Excel Centre, where the London fair is taking place. At the event, activists will read out names of those who’ve died from wars over the past 20 years, including those killed by the regimes and companies represented at the arms expo, and leave a wreath of white poppies, according to organizers.

“Twenty years after the horrors of 9/11 and the invasion of Afghanistan, we remember victims of war and violence by promoting peace and resisting the arms trade today,” Symon Hill, campaigns manager at Peace Pledge Union, one of the participating groups, said in a statement Sunday.

“DSEI is a vicious example of everyday militarism,” Hill continued. “The people of Britain didn’t ask for this. Even the mayor of London doesn’t want it. Amidst a global pandemic, rising poverty and the climate emergency, [U.K. Prime Minister] Boris Johnson and his mates have invited arms dealers to do deals with despots in the heart of east London.”

Share
Previous The Activation Tour – #SolutionsWatch
Next 120,000 Protest in The Streets of France Against Vaccine Passports for Ninth Straight Week