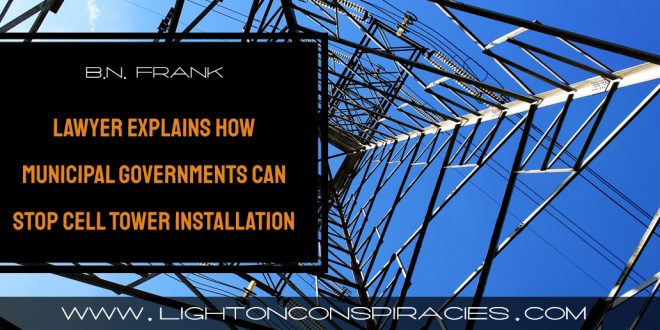 Andrew J. Campanelli has been hired many times to stop unwanted cell towers from being installed in American communities AND he was one of many experts kind enough to speak during last week’s 5G Summit.

If your local elected officials are whining that “their hands are tied” regarding any sized cell tower installation in your community, send them the following link and instruct them to skip to the 43-minute mark to hear what he has to say about that:

There are many reasons to NOT want cell towers installed near your home or throughout your community.  They reduce property value.  They can catch fire and/or collapse.  They can also create clusters of illness because they emit harmful biologically and environmentally harmful radiation 24/7 (see 1, 2, 3).  Firefighter unions oppose cell towers and antennas at their stations due to health risks.

Opposition to 5G small cell technology is worldwide.  Cities in the U.S. and around the world and ENTIRE COUNTRIES continue taking action to ban, delay, limit, and stop 5G deployment (see 1, 2, 3, 4, 5, 6,. 7, 8) due to valid health and safety risks that include base stations overheating!!!  Congress members have asked for evidence that 5G is safe AND that installation be slowed down during the pandemic.  Some municipalities have filed lawsuits against unwanted deployment.  Last December, doctors, scientists, and public advocates asked for a moratorium last December.  5G warnings and opposition have even been issued by the Departments of Defense, Energy, and Transportation, as well as NASA, NOAA, and the U.S. Navy (see 1, 2).

Since 2018, there have been reports of people and animals becoming sick after 5G was turned on including in the U.S. (see 1. 2, 3, 4).  Of course, other sources of Electromagnetic Radiation (aka “Electrosmog”) can cause symptoms and illness too.  This includes 4G towers as well as Bluetooth, Cell Phone Radiation and WiFi.