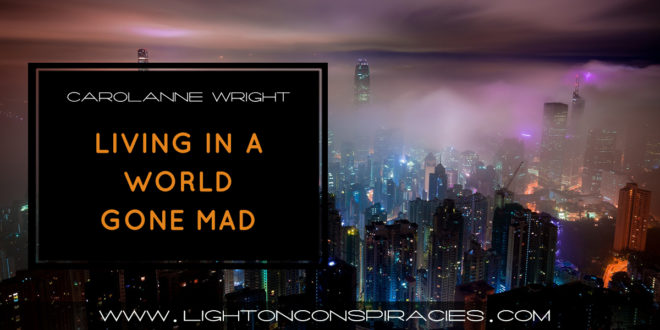 Living In a World Gone Mad

Is Peaceful Anarchy the Secret to a Better Society?

“But isn’t the anarchist a fabulous character? Those who control public opinion associate him with terrorism and chaos; he is a dark figure, an infernal one, who in political mythology is something of a specter.” ~ Ronald Creagh, Anarchy Archives

When I think of anarchy, the wildly popular film V for Vendetta comes to mind. Released over a decade ago, the “dystopian political thriller” has, to this day, a far reaching impact. The infamous Guy Fawkes mask worn by the hero is still a symbol of freedom against tyranny, and has since been taken up by individuals rebelling against the status quo — from the Occupy Movement to the hacker group Anonymous.

Having recently watched the film again after many years, I do admit to having chills when the masses don their masks in courageous defiance of the neo-Fascist State, which has pushed its agenda too far and, consequently, is teetering on the brink of destruction. The rebel in me shares an affinity with that specific scene, as well as the overall message of the film.

However, where one person sees liberation, another is equally horrified at such lawlessness. For a majority of us, anarchy is nothing more than senseless violence meant to destabilize the land, its people and economy. Granted, anarchists don’t exactly have the most glowing track record — think masked thugs who smashed windows, sprayed graffiti and damaged patrol cars during the relatively peaceful Seattle WTO protests in 1999, or the chaotic protests against the World Bank and International Monetary Fund, which ultimately lead to violent clashes with police.

But maybe the idea behind anarchy has been misunderstood — like many ideologies throughout history which have been hijacked and distorted. Maybe the time has come to revisit anarchy — and recognize that it might just be what we need to solve many of the issues we are faced with today.

Non-Violent Anarchy — Is It Possible?

“As anarchists, we seek to bring about a society in which coercive hierarchies, such as government and capitalism … no longer exist. To be exceptionally clear, anarchists do not desire chaos, we desire freedom and equality.” ~ anonymous member of Portland Anarchist Road Care

Could figures like Gandhi be considered anarchists in the purest sense of the word? To know, we need to explore what anarchy truly is.

In a nutshell, anarchy is about dissolving hierarchy in our social structures, where we create a world that does not distinguish between rulers and the ruled — basically, it advocates self-rule. An anarchic vision of society is nonviolent, self-managed and non-hierarchical, and anarchist thinkers hold dear to the ideal of democracy — rule by the people. Anarchists do not want to seize power, they want to dissolve it. It’s a social revolution, not a political one. Family organization, schools, religion, crime and punishment, the military, taxes, technology, political structure, patriarchy all come under question with anarchy.

“The principles of Non-aggression, individual sovereign rights, and voluntary exchange are the methods most sane people, friends or those in the market place, use to interact with each other on a daily basis. Why should these principles be inapplicable when a few sociopaths don expensive suits, surround themselves with elaborate ceremonies, and call themselves government?” [source]

Mohandas Gandhi is considered a philosophical anarchist because he opposed the State and believed, “[the greatest good of all] can be realized only in the classless, stateless democracy.” But it wasn’t the Western-style democracy he valued, where the “majority binds a minority” with its centralized power that feeds violence. Instead he advocated decentralization and self-rule. “In such a state (of affairs), everyone is his own rulers. He rules himself in such a manner that he is never a hindrance to his neighbor”.

The key here is that the individual takes responsibility for his own self-rule, which requires energy and effort to reform oneself —  to recognize the connection between an individual and society. The word he used for this is swaraj, “self-rule” or “autonomy.” Once individuals take steps toward self-rule in their own lives, it spreads across the community and, eventually, to entire nations.

“Independence begins at the bottom… It follows, therefore, that every village has to be self-sustained and capable of managing its own affairs… It will be trained and prepared to perish in the attempt to defend itself against any onslaught from without… This does not exclude dependence on and willing help from neighbors or from the world. It will be a free and voluntary play of mutual forces… In this structure composed of innumerable villages, there will be every-widening, never ascending circles. Life will not be a pyramid with the apex sustained by the bottom. But it will be an oceanic circle whose center will be the individual. Therefore, the outermost circumference will not wield power to crush the inner circle but will give strength to all within and derive its own strength from it.” [source]

Peaceful anarchy is not only possible, we’re seeing inspiring examples of it today. Non-violent methods of confronting “the system” — from peaceful parenting to Austrian Economics and Bitcoin — fall within the realm of non-violent anarchy. Moreover, Danilo of Peaceful Anarchism points out that “anarchy is the epitome of love, kindness, charity, empathy, and compassion” — due to the voluntary nature of these states, where it’s impossible to coerce another into authentically embodying them.

But peaceful anarchy doesn’t just reside in the realm of ideas, people are exercising practical action as well. Take a group of anonymous anarchists in Portland, Oregon who have started a crusade against the growing number of potholes in the city.

“The roads in Portland were getting worse and worse, and like everyone else, we were just waiting for someone else to fix it,” a member with the Portland Anarchist Road Care, or PARC, told The Huffington Post in an email. “We sort of reflected on the situation, and asked ourselves the questions made famous by John Lewis: ‘If not us, then who? If not now, then when?’ Two days later we were patching holes.” [source]

For this anarchist group, they believe it’s “about building community and creating networks of solidarity and mutual aid,” PARC said. “[Anarchy] is about claiming communal ownership over our spaces, be they public, work, educational, or otherwise. Our work directly puts that ideology into practice. They are our roads, we use them every day, and we will fix them together.”

Carolanne enthusiastically believes if we want to see change in the world, we need to be the change. As a nutritionist, natural foods chef and wellness coach, Carolanne has encouraged others to embrace a healthy lifestyle of organic living, gratefulness and joyful orientation for over 13 years

Previous FCC: Asleep At The Switch
Next A Tribute to Jim Marrs