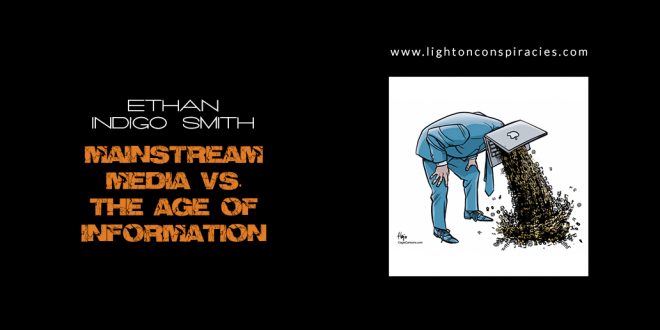 Mainstream Media vs. the Age of Information 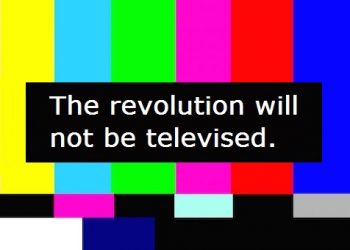 The information age is changing entirety. It has changed and continues to change so rapidly that many of us, many times, find ourselves playing catch-up, not just with trends of communication but also with shifts in the flow of information itself.

The internet provides access to information and education on everything from politics to physics. Indeed we are presently more capable of being knowledgeable than other group of people to have ever lived. Internet communication devices are almost like having a key to the Akashic Field; we can tap into practically all information anywhere on Earth.

However this ‘mechanical Akashic’ is also layered with the ill-mindedness and untruths that pervade this physical realm today. For this reason, we have to learn to distinguish between knowledge and piles. Our access to knowledge does not necessarily equate to wisdom (knowledge being the possession of information, and wisdom being the inclination to be productive with that information.) So it is up to each of us, not the government or its cohorts, to determine for ourselves what information is real and relevant, and what is ‘fake news’ or propaganda.

Information vs. the Status Quo

The world is on the precipice of change. The information age has the power to challenge the structures of the status quo. It even has the potential to eliminate the influence of money over the election of our leaders, since all candidates can be offered equal communication platforms which enable them all (and their policies) equally, so that those with the best ideas are elected and not the wealthiest corporate-funded noisemaker who can buy support and advertising time on corporate media.

What happened in Iran changed his life. His entire world, his viewpoints and values were turned upside down and the emotional turbulence he experienced tore down his inner walls leaving him naked and vulnerable – like an open wound. After a tragic murder, the situation became unbearable for one of his Iranian friends, so he ventured everything to help him get away and together the mad a dramatic escape from Iran via former Soviet and East Germany in a desperate attempt to reach Sweden. This book is a true and emotional description of real people in improbable world full of conflicts. It opens doors and spreads light on another Iran, its people and also, not least, the political and social conditions in the country. It is permeated by passion and tension as well as human ideals such as non-violence, tolerance and love.

To preview the book click on the thumbnail below:
Buy the paperback hereBuy the eBook here

Indeed, there are so many ways that the information age could completely shift the oligarchical collectivism of the power structures of the world in favor of individuals instead of institutions. So, instead of expanding our reach of information – instead of inspiring individuals to dig for truth and research for realness – the institutional powers-that-be are constricting the field of information. This is particularly obvious with recent challenges to net neutrality — a neutrality that 87% of average Americans support, but which institutions are nonetheless seeking to destroy.

This constriction of ideas has expanded to the point that anything esoteric or challenging to the mainstream media narrative is being covertly and overtly belittled, or outright censored, while at the same time, militaristic propaganda is put forth through the mainstream media, who refuse to genuinely analyze or criticize the actions of its government cohort. A clear example is the distinct absence of any pacifists in the mainstream news media even questioning our government’s policy of aggressive intervention, as the U.S. government continues to incite conflict with other nations under the guise of ‘humanitarianism’ and ‘peace’.

Moreover, mainstream media has been found repeatedly obscuring and falsifying ‘news’, while blacking-out important stories completely – clearly demonstrating it is working to corporate and government allegiances and agendas. Just look at the countless global events being reported by the underground news and compare it to the selective, politically-biased fear-fare of the mainstream; there is little journalistic integrity on display in the mainstream media, just the regurgitation of B.S. And lots of it. As a result, public confidence in mainstream news has steadily declined over recent years while “alternative media” has risen in its place, filling the void of real news, views and analyses that go unheard and unexamined in mainstream circles. (For a deeper examination of the ways institutions lie, please read my article A Tangible Math Lesson – Four Types of Institutional Lies.)

And therein lies the impetus for institutions to censor the internet. The role of journalism used to be about holding institutions to transparent accountability. But today, the major institutions of the world — a network of corporate, government, media and religious bodies — are withholding truth and information concerning everything from politics to physics while offering their own biased input, which is often completely bogus subterfuge designed to maintain control and consensus. Events and views reported in the mainstream are filtered, distorted and even blatantly constructed by media corporations that conceal their corporate and political alliances behind the guise of “news” and “journalism”. Why else do you think facts are being labelled as “alternative” or “fake news”, governments are attempting to censor and de-neutralize the internet, and the mainstream media fails to report on major world events while circulating others on endless repeat? (See: Mainstream Media Propaganda – “Extremely Dangerous to Our Democracy”.)

Undoubtedly, such selectivity of the news and information made available to the general population proves an institutional agenda that pivots upon the limitation and suppression of information – and that can only equal bad news for a supposedly free society.

“The mass media serve as a system for communicating messages and symbols to the general populace. It is their function to amuse, entertain, and inform, and to inculcate individuals with the values, beliefs, and codes of behavior that will integrate them into the institutional structures of the larger society. In a world of concentrated wealth and major conflicts of class interest, to fulfill this role requires systematic propaganda.”~Manufacturing Consent: The Political Economy of the Mass Media by Edward S. Herman and Noam Chomsky

Our institutions are designed to limit our access to knowledge and therefore, our thinking, and promote zealotry and elitism as the new political ideal — and as a result, many in our society are unable to comprehend the difference between legal and moral much less why the two have diverged.

So what’s the solution? Open information.

Open information liberates individuals. The reason the words library and liberty have the same etymological root is because of the freeing and empowering nature of information. So, no matter which individual or institution is presenting information, it is the responsibility of us all to interpret, consider and research the truth of everything – from politics to physics.

In our society, some choose to understand while some choose to stand over others. This is done through controlling information initially, and then controlling resources. Once information and resources are controlled, authorizing further actions that solidify the institutional status quo is easy. The institutions of the world are working together to ensure that they remain the holders of power and prosperity, for it is through institutions that individuals gain a foothold to stand over others. As history has shown us, empire serves no-one but itself.

So, to ensure our liberty we must also ensure the integrity of our library. The information age not only invites but requires that we expand our consciousness and our comprehension, not limit it. We do not need to funnel the pool of information into the narrow mainstream, we need to expand our minds and increase the numbers of sources of information. We don’t need corrupted governments or wealthy media corporations telling us what is true or important; the more information we have access to the more easily we can spot the information with bias and information that is untrue.

The First Amendment is designed to prevent the institutional, monothematic takeover of the media, and preserve and inspire our right to consider for ourselves what is truth. It is a fundamental tenet of the U.S.A. (and the free world) that “Congress shall make no law… abridging the freedom of speech, or of the press.” If we limit our sources of information, we limit the potential of our thinking and eventually, we may just have one modality of information, or even just one book to draw information from.

“In times of universal deceit, telling the truth is a revolutionary act.” — George Orwell

Activist, author and Tai Chi teacher Ethan Indigo Smith was born on a farm in Maine and lived in Manhattan for a number of years before migrating west to Mendocino, California. Guided by a keen sense of integrity and humanity, Ethan’s work is both deeply connected and extremely insightful, blending philosophy, politics, activism, spirituality, meditation and a unique sense of humour.