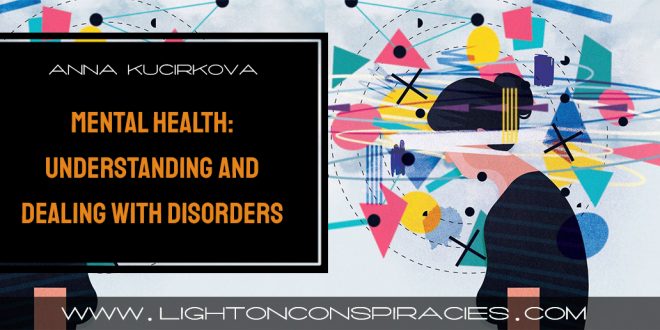 
Notice: Function WP_Scripts::localize was called incorrectly. The $l10n parameter must be an array. To pass arbitrary data to scripts, use the wp_add_inline_script() function instead. Please see Debugging in WordPress for more information. (This message was added in version 5.7.0.) in /home/admin/web/lightonconspiracies.com/public_html/wp-includes/functions.php on line 5835
Anna Kucirkova

Quick Tip: For instant burial insurance rates click on the quote box to the right.


But that practice is changing, and changing for good reason.

This article will go more into the depths of mental health and understanding as far as treatment. When getting any kind of life insurance it will depend on the severity of the mental disorder and the treatment.

We will always find the best possible option. Please enjoy the rest of this article and leave comments below.

We live in a world that’s become increasingly complex and stressful. It’s no wonder that awareness is spreading about mental health, mental illness, schizophrenia, anxiety disorders and depression in ways it never has before.

Experts in the medical field will tell you that “millions of Americans live with various types of mental illness and mental health problems, such as social anxiety, obsessive-compulsive disorder, drug addiction, and personality disorders.”

Not all stress is bad, but both routine and longterm stress take a toll on physical, mental and emotional health. Biochemical changes take place, stress hormones are released, and repeated stress can lead to anxiety and depression. Chronic stress affects the way the brain functions.

Public focus on the prevalence and causes of mental stress and more forthright discussion about preventing or lessening the effect of many of today’s stressors will benefit everyone.

What is mental health?


According to the WHO (World Health Organization), mental health is “… a state of well-being in which the individual realizes his or her own abilities can cope with the normal stresses of life can work productively and fruitfully, and is able to make a contribution to his or her community.”

Mental health challenges are typically classified into three main categories – mental, behavioral, or emotional disorders. The impact of these can vary from mild to severe impairment of a person’s ability to function.

NIH (National Institutes of Health) sheds light on the broad reach of these disorders. They report that neuropsychiatric disorders are the leading cause of disability in the U.S. – even more than heart disease and other medical problems.

What are common disorders linked to mental health?

1. Anxiety
Nearly everyone experiences anxiety to some degree – anxious thoughts when facing a difficult test or an interview or before making a public speech.

But if your anxiety spirals to a level that that intrudes on day-to-day activities, you might have Generalized Anxiety Disorder. Sometimes it goes hand-in-hand with other disorders.

Here are the symptoms of GAD as described by verywellmind.com:

Physical symptoms may be present, like fatigue, irritability, tense or aching muscles, being easily startled, trouble sleeping, sweating, headaches, and others.

2. Panic disorder (panic attacks) are a particular category of anxiety. WebMD.com says these are “intense periods of fear or feelings of doom developing over a very short time frame — up to 10 minutes — and are associated with at least four of the following:”

Depression has a major impact on a person’s overall mental health; it affects how a person thinks, feels and behaves. Feelings of sadness and loss of interest in things or activities that formerly were enjoyed are characteristic of depression. Fortunately, there are treatments that help.

Medication or psychotherapy, or both, are effective for depression. People with clinical depression don’t just “get over it.” They greatly need trusted friends and professionals to help them get better.

Depression should always be taken seriously. Serious depression can lead to suicidal thoughts and a feeling that life isn’t worth living. Depressed individuals need to have someone to talk to that they can trust. Free helplines are commonly available.

Students are one specific group who have had worsening levels of anxiety and suicides as pressures to perform have increased. The majority of university students feel that parents or other trusted adults should be informed when a student is going through a mental health crisis, even though they’re technically independent.

4. Obsessive-Compulsive Disorder (OCD) – those with both obsessions and compulsions. It’s characterized by unyielding and preoccupying thoughts (obsession), and a strong drive to perform repetitive or ritual-like acts, such as handwashing (compulsion).

5. Post Traumatic Stress Disorder (PTSD) is also a form of anxiety, caused by events the person has lived through that were highly stressful or frightening. Nightmares and flashbacks can occur, along with guilt and a feeling of isolation.

Someone with PTSD often relives the traumatic event through nightmares and flashbacks and may experience feelings of isolation, irritability, and guilt. Problems with sleeping and concentration are common. Their symptoms often hinder their everyday life.

6. Phobias are an exaggerated sense of danger about a particular object, situation, place or animal. It’s more than just an everyday fear.

People with phobias can end up planning their whole life around avoiding whatever it is that causes them this fear.

What are mental health mood disorders?


Mood disorders are somewhat distinct from the mental health disorders mentioned above, but may also accompany or be an underlying cause of those disorders. The Mayo Clinic describes many of these below. For many people, mood disorders can be successfully treated with medications and talk therapy (called psychotherapy).

Some examples of mood disorders include:

Alcohol withdrawal is one such example. Some experts in the field, such as those at addictioncenter.com will tell you that

“Alcohol abuse and depression are very closely correlated. Many depression sufferers, especially ones who have not been properly diagnosed, often turn to alcohol to escape. Desperate to feel better or numb the pain, even for a little while, depression sufferers often use the pleasurable effects of alcohol for that purpose.”

Recovering alcoholics may need inpatient or outpatient treatment for the medical issues they experience during withdrawal, but counseling, support groups like AA (Alcoholics Anonymous) and the help of friends or family are key to mental and emotional recovery.

What is a trigger warning?


One interesting mental health quandary that’s arisen of late is whether students on college campuses should be given “trigger warnings.”

Psychology Today explains: “Recently, there has been a growing push for the use of “trigger warnings” on college campuses. A trigger warning is a brief opening statement that a lecture or reading’s content may provoke an adverse reaction in some people. The nature of the potential reaction is left unspecific; but can conceivably refer to disturbing and distressing thoughts, emotions and behaviors.”

But do trigger warnings help or hamper mental health? The article goes on to say these warnings may be most helpful for those suffering from PTSD or other serious anxiety, but some researchers say there’s no evidence that trigger warnings do much good.

They believe (and have research to support their view) that “avoiding phobic experiences can be detrimental to individual mental health. Avoidance can increase sadness and worry, which in turn can constrain everyday behavior and prevent personal growth. In fact, evidence suggests that the best way to tackle undue fear is through exposure, rather than avoidance.”

What are some natural (non-medication) ways to help support mental health?

One doctor says this practice works because “People with anxiety have a problem dealing with distracting thoughts that have too much power.” Mindfulness teaches people to recognize their unhelpful thoughts and discard them.

Mental health and exercise are directly linked. There are loads of benefits from exercise for your overall physical health and weight, but it’s become obvious that exercise is just as important for the way it makes you feel emotionally and mentally.

Studies show exercise can be just as effective in treating mild to moderate depression as antidepressants, but without the potential side effects. A sense of well-being and relief from anger or tension commonly result from a regular exercise schedule, as little as 15 to 30 minutes a day.