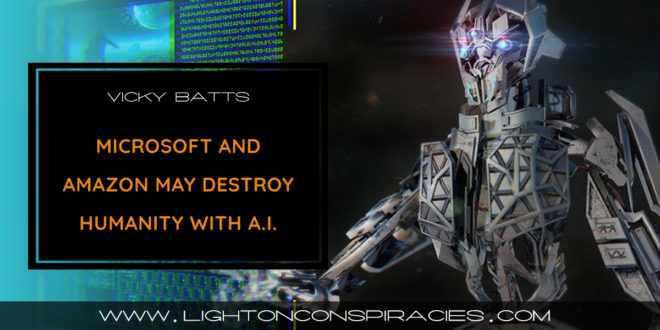 Microsoft and Amazon may destroy humanity with A.I. research that resembles “Skynet” from the Terminator movies

Microsoft, Amazon and other major tech companies are putting the entire world at risk with their development of “deadly A.I.” and “killer robots,” according to a shocking report from Dutch NGO Pax. A study led by the Dutch NGO ranks 50 tech firms based on their relations to the development of deadly A.I. or military projects –and questions why companies like Microsoft and Amazon are apparently involved with the development of autonomous weaponry.

Is this the beginning of a Terminator movie? The NSA does already have something called “Skynet,” which is a surveillance program for suspected terrorists. But the development of A.I. weapon systems designed to independently select and attack targets is another ballgame. The advancement of A.I. and robotics could see the dawn of a new horizon — one in which robots can decide what humans they want to kill, and entire groups of people can be killed in the blink of an eye. The advancement of killer A.I. technology is a threat to humanity and the Dutch NGO warns that such weapons will “inevitably become weapons of mass destruction.”

Microsoft, Amazon are of “high concern”

As Breitbart reports, Dutch NGO Pax ranked 50 tech companies whether they were actively working on deadly A.I. technology or military projects  — or if they were making an effort to stop contributing to these kinds of projects. Amazon and Microsoft were just two of 21 “high concern” organizations named by the report. According to Pax’s study, the two tech giants are currently bidding on a $10 billion Pentagon contract for “providing cloud infrastructure” to the U.S. military.

International Business Times reports further that the development of A.I. for military purposes has prompted substantial criticism and concern. Stuart Russel, a computer science professor at the University of California-Berkeley, told reporters, “Autonomous weapons will inevitably become scalable weapons of mass destruction, because if the human is not in the loop, then a single person can launch a million weapons or a hundred million weapons.”

The professor says that armed mini drones could be the way of the future. “With that type of weapon, you could send a million of them in a container or cargo aircraft — so they have destructive capacity of a nuclear bomb but leave all the buildings behind,” Russel explains.

Microsoft and Amazon have been warring over the $10 billion Pentagon contract for quite some time. And in that time, many people have spoken out about their concerns regarding the implementation of A.I. technology on the battlefield. The “war cloud” project, also known as the “Joint Enterprise Defence Infrastructure (Jedi) plan has faced much criticism — even from Microsoft’s own employees.

In an open letter published on Medium last year, Microsoft employees pleaded for the company to abstain from bidding on the Pentagon’s contract. Beyond controversies over conflicts of interest with Amazon, critics say the advent of this “war cloud” technology could change the face of war forever. The Jedi project would use cloud computing to store classified military information — but also to enable A.I.-based war planning.

There are many concerns about the implications of an A.I.-enhanced military, especially further down the line. For now, the Pentagon wants to market this technology as a way to keep troops safe and make the military more “efficient” on the battlefield — but how long will it be until this kind of technology is turned against civilians? Experts say this “killer A.I.” technology can be used to target people based on all kinds of measures, from their skin color to their political ideologies. And we already know Bill Gates is a closet eugenicist.

See more coverage of the latest news on A.I., robotics and more at Glitch.news.