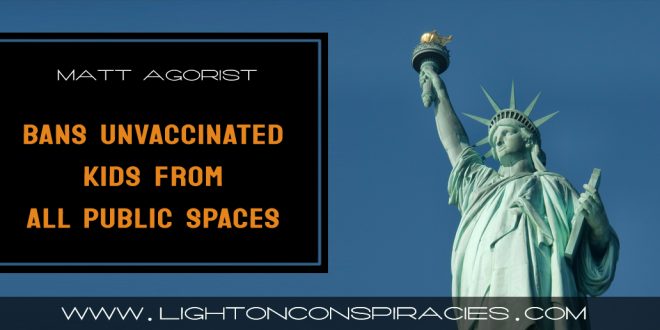 Rockland, NY — In one of the most shocking moves to date about the 2019 measles outbreak, Rockland County officials have declared a state of emergency and has effectively banned any child under the age of 18, who has not received the MMR vaccine, from all public spaces.

“Effective at the stroke of midnight, Wednesday, March 27, anyone who is under 18 years of age and unvaccinated against the measles will be barred from public places until this declaration expires in 30 days or until they receive the MMR vaccination,” according to a statement from Rockland County officials.

The public spaces include schools, stores, places of worship and public transit, according to officials—essentially everything.

Exactly how authorities will know if a child is unvaccinated is unclear. However, they are still planning to take legal action against parents.

“Local police will not be asking for documentation of vaccinations, but will enforce it retroactively if a parent is found to have allowed their unvaccinated kids into the public spaces,” according to the county.

This state of emergency and demand for children to get vaccinations or face becoming an “unperson” comes amid the CDC issuing an update to their website adding an entire slew of people who should not get the MMR vaccine—including anyone who “has a parent, brother, or sister with a history of immune system problems.”

What’s more, most people who get the measles make a full recovery within a week or so. Although some studies do link unvaccinated people to measles cases, according to multiple other studies, the MMR vaccine is likely worse than getting measles.

In 2017, the Physicians for Informed Consent (PIC) reported in the British Medical Journal that every year, approximately 5,700 U.S. children suffer from seizures as a direct result of the measles, mumps, and rubella (MMR) vaccine.

“In the United States, measles is generally a benign, short-term viral infection; 99.99% of measles cases fully recover,” said Dr. Shira Miller, PIC president and founder. “As it has not been proven that the MMR vaccine is safer than measles, there is insufficient evidence to demonstrate that mandatory measles mass vaccination results in a net public health benefit in the United States.”

While there is a risk of seizure from contracting measles, according to the data, the risk of developing seizures from the vaccine to combat measles is five times higher.

What’s more, the seizures from the MMR vaccine are far worse, according to the study, and can cause permanent harm.

“For example, 5% of febrile seizures result in epilepsy, a chronic brain disorder that leads to recurring seizures. Annually, about 300 MMR-vaccine seizures (5% of 5,700) will lead to epilepsy,” PIC points out.

By the pro-forced vaccination crowd’s logic, we should simply sacrifice hundreds of children a year to achieve an unproven theory of herd immunity. That is, of course, until it’s their child who is left permanently disabled by the vaccine.

On a daily basis, we are seeing media outlets dehumanizing, degrading, and even calling for the silencing of those who are pro-vaccine safety or choose religious exemptions. Using this fake epidemic as an impetus for pushing legislation, 100 bills have been filed in 30 different states proposing to expand, restrict or eliminate vaccine informed consent rights. And now, as the above declaration illustrates, legislation is no longer necessary and children can be sentenced to prison in their homes for the sole act of being unvaccinated.

Share
Previous Standing at the crossroads of collective evolution and total collapse
Next Russiagate: A conspiracy theory (Everything you wanted to know about russiagate but weren´t stupid enough to ask.)