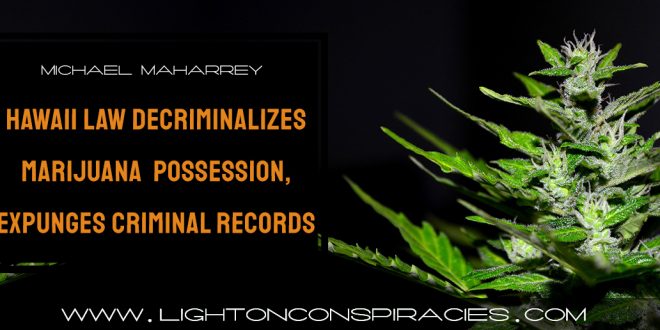 HONOLULU, Hawaii (Jan 13, 2020) – A new Hawaii law that decriminalizes marijuana possession and creates a process to expunge the records of certain marijuana offenders is now in effect. The new law takes another step toward nullifying federal cannabis prohibition in effect in the state.

Twenty Democratic representatives sponsored House Bill 1383 (HB1383). The new law decriminalizes possession of three grams or less of marijuana making it similar to a traffic violation punishable by a fine of $130. The bill also creates a process allowing individuals convicted of possession of three grams of marijuana or less to have those convictions expunged from their criminal records. Finally, HB1383 establishes a marijuana evaluation task force to make recommendations on changing marijuana use penalties and outcomes in the state.

The House passed HB1383 by a 35-16 vote. The Senate approved the measure 22-3. Gov. David Ige didn’t sign or veto the bill within his allotted timeframe and it became law on July 10 without his signature. It went into effect Jan. 1, 2020.

Enactment of HB1383 not only loosens marijuana laws and will help those with some prior marijuana convictions on their record get a new start; it will also further undermine federal marijuana prohibition. As marijuana becomes more accepted and more states simply ignore the feds, the federal government is less able to enforce its unconstitutional laws.

Decriminalization, along with Hawaii’s medical marijuana program, removed a layer of laws prohibiting the possession and use of cannabis in the state, but federal prohibition remains in place. This is significant because FBI statistics show that law enforcement makes approximately 99 of 100 marijuana arrests under state, not federal law. When states stop enforcing marijuana laws, they sweep away most of the basis for 99 percent of marijuana arrests.

Furthermore, figures indicate it would take 40 percent of the DEA’s yearly-budget just to investigate and raid all of the dispensaries in Los Angeles – a single city in a single state. That doesn’t include the cost of prosecution. The lesson? The feds lack the resources to enforce marijuana prohibition without state assistance.

HB1383 further undermines prohibition make it that much more difficult for the federal government to enforce it in Hawaii.

Enactment of HB1383 ignores federal prohibition and continues the process of nullifying it in practice in Hawaii.

Colorado, Washington state, Oregon and Alaska were the first states to legalize recreational cannabis, and California, Nevada, Maine and Massachusetts joined them after ballot initiatives in favor of legalization passed in November 2016. Michigan followed suit when voters legalized cannabis for general use in 2018. Vermont became the first state to legalize marijuana through a legislative act in 2018. Illinois followed suit in 2019.

With 33 states including Hawaii allowing cannabis for medical use, the feds find themselves in a position where they simply can’t enforce prohibition anymore.

“The lesson here is pretty straightforward. When enough people say, ‘No!’ to the federal government, and enough states pass laws backing those people up, there’s not much the feds can do to shove their so-called laws, regulations or mandates down our throats,” Tenth Amendment Center founder and executive director Michael Boldin said.

Michael Maharrey [send him email] is the Communications Director for the Tenth Amendment Center, where this article first appeared. He is from the original home of the Principles of ’98 – Kentucky and currently resides in northern Florida. See his blog archive here and his article archive here.He is the author of the book, Our Last Hope: Rediscovering the Lost Path to Liberty. You can visit his personal website at MichaelMaharrey.com and like him on Facebook HERE

Share
Previous Fighting the Fed (and the Crooked Banks) by Holding Gold
Next Psychotronic Harassment, False Flag Symbolism, Cody and the Clintons