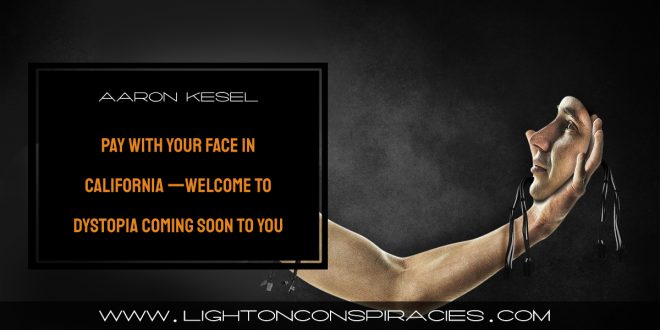 In the future you won’t need a microchip implanted into your hand or forehead for payments, no, instead you’ll just need your smiling face. Welcome to facial recognition dystopia!

A tech company called PopID says that it has helped dozens of retailers and restaurants in Pasadena, Calif., establish “the nation’s first dense ‘face-pay’ network.”

So what in the hell is a “face pay network?”

PopPay is a facial recognition payment solution that can allow contactless, hands-free payment at a kiosk, a drive-thru, a screen at a counter, or tableside with a hand-held device. Once PopID’s system recognizes the customer’s face, it draws funds from their account and sends a text message to confirm payment, Fox News reports.

With the coronavirus changing the way many companies do their daily businesses, PopID proposes its system as a way for customers to make safe purchases without needing contact with employees. A demonstration video released on January 29th provided by PopID even shows a customer wearing a mask using the system.

The company also has a similar PopEntry technology that can be used for workers to “scan in” at their jobs and for students entering campus facilities. The devices can also be equipped with thermal temperature screening as a health safety measure. Again, welcome to freaking dystopia.

“In each new city we enter, we initially focus on installing PopEntry systems in the workplace and on local college campuses,” PopID CEO John Miller said in a written statement to Fox News. “As these communities grow comfortable using PopID to check in, we enlist area restaurants and retailers to offer PopPay for transactions.”

Currently, the system is only in Pasadena California at some restaurant chains such as mom-and-pop operations like Daddy’s Chicken Shack and regional chains such as Lemonade, LA Times reported.

However, PopID plans to launch more networks and roll out across the nation on a city-by-city basis.

Believe it or not, this type of payment system isn’t new; it started in China prior to the pandemic going at least all the way to 2017 with Alipay’s Pay With Face Kiosks which were launched throughout China.

The Guardian noted in September of last year that China’s shoppers are increasingly purchasing goods with facial recognition technology. One researcher was just as worried as I am.

“There’s a big risk … that the state could use this data for their own purposes, such as surveillance, monitoring, the tracking of political dissidents, social and information control, ethnic profiling, as in the case with Uighurs in Xinjiang, and even predictive policing,” Adam Ni, China researcher at Macquarie University in Sydney, said.

“This is certainly one of the more contentious aspects of the gathering of facial recognition data and the usage of them.”

In fact, in China, more than 100 million people signed up for a similar face payment system in 2019. Further, tech giant Alipay is rolling out face payments across the country; and, since last year, commuters in Shenzhen, China released a government system for elderly Chinese. The program allows residents of China over the age of 60 to register for free subway rides, using just their face as their ticket, Activist Post reported. Although, this program is slowly rolling out throughout China in several cities, The Standard reported.

Back in the United States, as Activist Post previously reported, lawmakers have called for banning facial recognition from federal law enforcement, but this doesn’t include commercial use. Thus far, eight cities in the U.S., including San Francisco, Oakland, and Boston, have banned government use of the technology.

Legislators have also called for putting a “time out” on facial recognition technology until regulations are in place. Congress has held several oversight hearings on the topic, and there are at least four previous bills in the works to limit the technology.

PopID is the first facial recognition payment app to get up and running here in the U.S. and you can bet your identity it won’t be the last. This technology has so many open holes for exploitation that I am not even going to get into it all. But I will say that the chance for abuse from world governments to track individuals’ biometrics plus their spending habits is a huge red flag. We have our smartphones which are privacy-invasive enough. We should keep in mind that with cryptocurrency we don’t need to pay with our faces.

Share
Previous Why We Win In The End With Larken & Amanda Rose
Next Fact Check: TRUE! The Cabal is Panicking