Leave it to the great American police state to turn Reality TV into real-time spying of its citizens.

Recently the Newark, New Jersey Police Department decided it needed to do more, much more to build trust between the police and the community.

Here’s a little background on police building trust in the community. 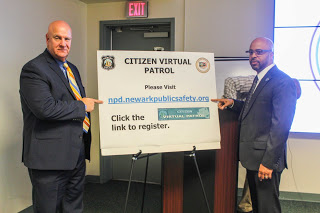 Last year, the Newark Police Department received an award from the New Jersey Attorney General for Outstanding Community Policing for its innovative approach to fostering relationships of collaboration and trust between police and the community.

How did the Newark Police foster trust between the police and community you ask?

The CommUNITY & COPS program is a PR program that uses clergy to convince the public that police are your friends.

Apparently, the police decided that using the clergy to build trust between them and the community wasn’t enough.

Because this year, they invented a new program designed to encourage citizens to use CCTV cameras to spy on their neighbors in real-time. (To find out more about police using CCTVs to spy on businesses and citizens click here and here.)

Nothing, says ‘outstanding community policing’ like encouraging the community to spy on your neighbors, right DHS?

For years, DHS has been encouraging citizens to become government spies, using phrases like ‘If You See Something, Say Something’ and even asking citizens to take a spy quiz as the picture below shows.

Police in New Jersey, have taken ‘See Something, Say Something’, to a whole new level. They are using CCTV cameras to create a city of stay-at-home spies!

A network of surveillance cameras around Newark will soon let people watch various locations in what local leaders are calling “a blockwatch on steroids” (Click here to find out more about Virtual Block Watch.)

Incredibly or perhaps predictably, the Mayor claims that having citizens spy on their neighbors 24-7, “will result in safer neighborhoods and a stronger partnership between police and the community in safeguarding the City of Newark.”

Keep in mind, all of this is being done while the police department has been under a Consent Decree. Because they have such a trustworthy relationship with their citizens, wink, wink.

Look no further than the Department of Justice’s ‘SMART Policing Initiative’ which gave Newark  $700,000 to create a network of citizen spies.

Who needs Reality TV shows, when citizens can stay-at-home and spy on thousands of citizens for the Feds?

Does it make you feel safer knowing our government is giving police departments hundreds of thousands of dollars to turn cities into a giant surveillance network?