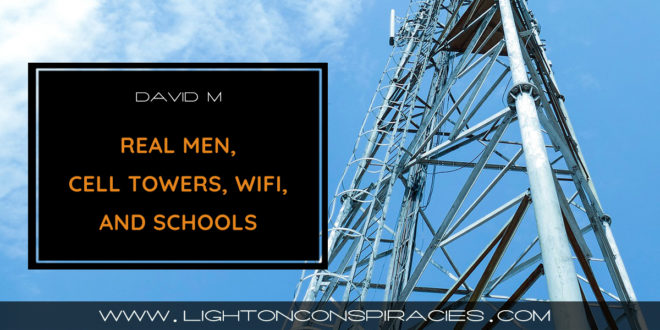 By David M. with Patricia Burke

I took great care to put my daughter in a private school, a school with an environmental philosophy that seemed in-line with my ideas, and was shocked when, returning after summer hiatus, found they’d allowed a giant cell tower onto the property.

It was 2008 when I fell into the radio frequency rabbit hole.  I’d never researched the effects of cell tower radiation so I asked the head of school how she concluded it was safe. She cited the World Health Organization and American Cancer Society assurances of safety. Unsatisfied with her response, I began my own research and came upon the work of Dr. Henry Lai and Dr. Martin Blank. I contacted both scientists and, while they were cautious about making firm statements at that time, they did note that available science was heavily weighted toward the studies establishing harm. Sadly, no other families were willing or able to object to what could be catastrophic for their children. I was left the lone voice trying to raise awareness and effect change.

It haunts me that I waited a year before removing my daughter from that environment only to enroll her in our local public school already flooded with wi-fi installations.

I began the frustrating path of going to school board meetings and testifying about the perils of radiation exposure in the schools. I met with the chief of safety for PPS and flooded him with studies. I found others online and began connecting with the relatively small international community of advocates and scientists. I measured radiation levels of wi-fi and cell towers in schools. I was unsuccessful in my efforts to have them even listen to me.

After many failed attempts to meet with school board members I set up a website and filed a law suit against PPS (link shows complaint and witness declarations). The core of my legal argument was the right to a safe environment for my daughter’s education as guaranteed in the 14th Amendment of the Constitution.

I was introduced to an attorney who was also similarly alarmed and worked for expenses only. It took nearly a year to prepare our case. In that time, we had assembled as our witnesses, Magda Havas, Curtis Bennett, David Carpenter, Barrie Trower, Andrew Goldsworthy and Lloyd Morgan.  Obtaining the witness depositions was travel intensive and a lot of fun. We went to New York to meet with the experts in the western hemisphere.  From New York we went to London to meet with experts in the U.K.

The lawsuit could have been dismissed early but we made it to the oral arguments. The courtroom experience was devastating; district court Judge Mossman said, “I gain no satisfaction from this ruling…” and went on to dismiss the case due to a technicality called primary jurisdiction which meant the case was a complaint against FCC standards and did not belong in federal court.

When the lawsuit failed, I was ridiculed by the local “newspaper,” the Willamette Week, for wasting school board money defending the lawsuit, I decided to run for school board. It was an inexpensive way of reaching 500,000 homes through the voter’s handbook. I was endorsed by Devra Davis and Frank Clegg. With little expense throughout the campaign I received 17% or 13,000 votes. Two years later, I ran for city council and two years later I ran for school board again. Running for office is an experience I recommend to everyone.

I don’t remember whether it was before or after the school board run when I contacted my representative, Alissa Keny-Guyer, who was enthusiastic about introducing a bill that eventually, after 3 attempts became Oregon Senate Bill 283.

The first 2 attempts to pass the bill (in 2015 & 2017), failed due to lack of legislative sponsors. Two years later, I heard from Rep. Keny-Guyer that she wanted to introduce the bill for a third time. I drafted the bill again.  A first draft goes to professional bill writers vetting the text for language and possible legal road blocks. I scheduled meetings with initial sponsors and as many other legislators as I could in hoping to get other legislators to sign on. I assembled 12 sponsors from both parties. The 2 chief sponsors were Senator Laurie Monnes-Anderson, president pro tem and chair of the Senate Health Committee, and Rep. Alissa Keny-Guyer, who chaired a committee in the House as well. Republican Senator Brian Boquist signed on, insisting he be added as a chief sponsor, claiming he lost all of his friends in Viet Nam from exposure to radar.

At that time there appeared articles in the news of cancer causing cell towers in schools concurrent with my lobbying the bill it seemed legislators were more receptive. I spent countless hours at the capital meeting with legislators and distributing material. I created my own handouts (few attached) understanding that legislators prefer bullet points over lengthy studies and news articles. The local press, with exception of the newspaper, Street Roots, ignored the bill.

After moving through a series of work sessions, meetings with legislators, and having the bill edited down to its final bare bones, a hearing (SB 283 Hearing) was scheduled. I was fortunate to have Dr. Paul Heroux, Dr. Paul Dart (a local doctor who treats patients with EHS),  Cindy Franklin, and a 14-year-old girl with EHS giving testimony at the hearing.

When it came to a vote, the bill passed unanimously in the Senate, and overwhelmingly in the House. The bill went to the Oregon Health Authority where, after meeting with the head of the radiation division, David Howe, I was assured it would be handled with honesty and objective scientific protocol in keeping with the mandate of the bill.

The OHA perverted the process by using industry-funded studies, omitting animal studies and suppressing a first draft which showed harm from EMFs throughout the report. The bungling lack of professionalism and scientific misconduct was evident on every page of the final report. The authors released an unprofessional cover-up, lacking scientific or investigative integrity, concluding no harm from radiation in schools. After reading the final report, I knew more harm than good would come from this effort, handing industry a gift: A false statement of safety.

Many people wrote to OHA demanding they retract the review. Susan Foster wrote a letter to the governor and included her well known study of firemen with brain damage from cell towers on fire stations. OHA was besieged with complaints. In response, they sent an email claiming to address “frequently asked questions.” The substance of that email revealed an embarrassing lack of self-awareness that further weakened their evidence, conclusions and credibility.

Shortly thereafter, I was fortunate to meet journalist Dan Forbes, a seasoned muckraking investigator with a track record of getting results through his reporting. After doing investigative magic, which involved securing a copy of the first draft (previously withheld from a FOIA request). Forbes wrote a 54-page exposé recently published in The Washington Spectator. The article benefited from the extraordinary research contributions of Theodora Scarato of the Environmental Health Trust, and Cindy Franklin. Theodora crafted a 112pp critique of OHA cover-up.