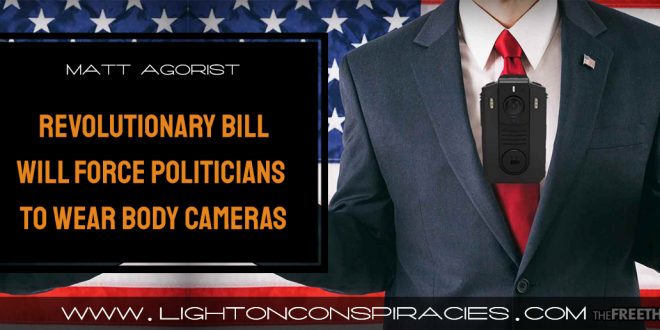 Rockford, IL — Transparency among US politicians is all but non-existent in modern day America. It seems that every piece of information the citizens wish to obtain from the state must come through begging the government in the form of a Freedom of Information Act request. Many times, these requests are denied and the citizens remain in the dark despite political crimes. However, a new bill out of Illinois is seeking to shift that paradigm of unaccountable lawmakers by forcing them to wear body cameras while conducting public business.

Rep. John Cabello, R-Machesney Park, has proposed a revolutionary bill that would require all elected officials in Illinois to wear a body camera if they are working. Cabello’s intent behind the bill is to mitigate the rampant corruption currently plaguing Illinois politics.

“We see the dealings going on in Chicago with some of the wiretaps and some of the corruption that’s been going on for decades,” Cabello said. “We hear of the state lawmakers that get themselves into trouble with bribes and so on and so forth. So, I just thought that since the state was looking at making all police officers wear body cameras, I figured this might be a good way to have records of what lawmakers are doing.”

The bill, HB3447 will treat the body camera videos in the same way police use them. The legislation allows the recordings to be used as evidence in any administrative, judicial, legislative, or disciplinary proceeding.

The bill also notes that if anyone finds “by a preponderance of the evidence that a recording was intentionally not captured, destroyed, altered, or intermittently captured in violation of the Act, then the court or other finder of fact shall consider or be instructed to consider that violation in weighing the evidence, unless the State provides a reasonable justification.”

The measure is extensive and would cover all elected officials in the state, including county officials as well as those in state office.

Naturally, Cabello has critics who are calling the bill a charade and claim that it would cost the state too much money. But if it stopped the rampant looting of the people by their elected officials, this could end up saving tons of money in the future. Also, it’s what already happens with cops.

“It’s going to be the same as what law enforcement will have to do,” he said. “There’s not going to be one person going through all of the recordings. It’s more of if someone makes an allegation or a complaint, you’ll at least have some footage to go through.”

Unfortunately, because the corruption is so rife within the state—and all other states, for that matter—Cabello expects that most lawmakers will vote it down. After all, why on Earth would criminals vote to hold themselves accountable?

“I think there will be some elected officials that will support it but I doubt it’s even going to get a committee hearing in Springfield,” Cabello said. “The majority party, they won’t want to hear this. I can’t see (House Speaker Mike) Madigan letting this see the light of day.”

Still, the idea has merit, Cabello said, according to Rockford Register Star.

“It’s time we start getting public trust back for the elected officials and the only way that’s going to happen is we have to root out the corruption,” he said.

We agree, and it should go much further. This measure should be implemented nationwide, starting with the federal government. And, all the footage should be available for the public to see. After all the politicians have on body cameras, we then need them to be required to wear the logo of any entity which has given them money. Just like NASCAR drivers do, the more money they get, the bigger the logo they’d have to wear. One can dream.