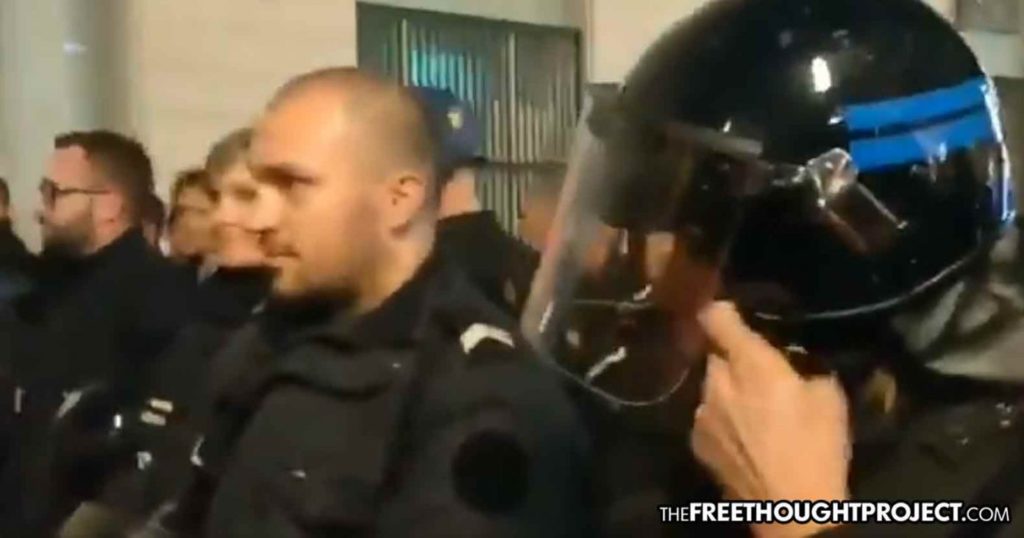 Paris, France — A grassroots movement made up of citizens who have become fed up with the political establishment in France has been growing since early November and it has come to a head this week. The movement, known as “gilets jaunes” or “yellow vests” began as an anti-tax protest but has since merged folks from the left and the right into a much broader anti-government protest.

French citizens have used the yellow vests that their government requires they carry in their vehicles as a symbol of this protest. As the Guardian points out, unlike previous French protest movements, it sprang up online through petitions and was organised by ordinary working people posting videos on social media, without a set leader, trade union or political party behind it.

Over the weekend, roughly 100,000 citizens took to the streets of Paris. Most of these protesters were peaceful, however, some of extremists from the far left and far right engaged in violence against police, smashed out windows, and set fire to cars.

Of those arrested for violence, the majority of them were “professional” rioters who had come from outside Paris to infiltrate the peaceful demonstrations, according to Paris prosecutors.

Despite this violence, many of the police officers in France understood the anger coming from the citizens. Instead of clashing with the peaceful protesters, many of the officers were seen joining them in solidarity.

In at least two different cases, police were seen on video removing their helmets to show the people that they were on their side.

In both cases the protesters erupted with applause and began singing La Marseillaise, the national anthem of France.

Political commentator and French historian Karl Sharro explained the protest as “an organic leaderless protest with no clear ideology.”

Sharro explained that the protest is so vast because so many people have lost faith in the establishment and they are oppressed.

“Firstly, why the colour yellow? In traditional French culture, yellow represents the Mediterranean regions of France which always felt oppressed by Paris. These protests represent ancient regional grievances,” he wrote.

“Secondly, why the vests? In the French psyche, the lack of arms represents ‘helplessness’. The protests are about marginalisation and the impotence felt by ordinary people.”

The solidarity of police shows just how widely accepted this movement actually is. However, not all cops were so quick to join in. As the video below shows, it was business as usual for those who wish to remain the oppressors.

BREAKING: Anti Macron Protests: Video of French police forces brutally beating a yellow vest protester has led to anger among the French population.
WARNING: Footage may be disturbing for some: #GiletsJaunes pic.twitter.com/A5oF17oCKw

Although French president Emmanuel Macron has largely ignored protesters in the past, due to the size of this grassroots movement, he is unable to do this any longer.

As the Guardian reports, Macron is now under pressure to consider the gilets jaunes’ demands, which include scrapping the eco tax and raising the minimum wage. It is uncertain what measures the government might propose in the coming days. The economy minister, Bruno Le Maire, said on Monday that the government should press on with lowering taxes but at the same time lower France’s high public spending.

When the government’s enforcers (the police) refuse to beat the people into compliance and, instead, join them, the tyrants become impotent. The incredible nature of these two scenarios provides hope for the future and illustrates the power of peacefully disobeying.

Much of the daily content we publish is notable to us for various reasons. Having said that, the views and opinions expressed in this content, (articles, videos or any other content), are those of the authors and do not necessarily reflect the opinions of the authors of this site. As always, please do your own research. Please do not believe what you are told. Take what you like, and leave the rest.
Previous “How to Wreck the Environment” — MacDonald’s Blueprint for Modern Geophysical Warfare
Next 60 Ghz Millimeter Wave Solution