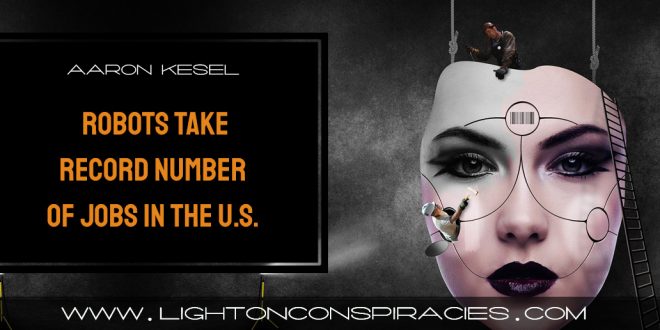 Robots Take Record Number Of Jobs In The U.S. According To Robotic Industries Association

According to the Robotic Industries Association (RIA), robots/artificial intelligence has taken over a record number of jobs in the U.S. proving what Activist Post has been sounding the alarm about for months.

Robots shipped to North American companies in record numbers last year, with more non-automotive companies installing robots than ever before. Statistics from the Robotic Industries Association (RIA), part of the Association for Advancing Automation (A3), show 35,880 units were shipped in 2018, a 7 percent increase over 2017, with 16,702 shipments to non-automotive companies, up 41 percent. Notable growth came in areas like food and consumer goods (48 percent), plastics and rubber (37 percent), life sciences (31 percent), and electronics (22 percent).

While the automotive industry has always led the way in implementing robotics here in North America, we are quite pleased to see other industries continuing to realize the benefits of automation,” Jeff Burnstein, President of the Association for Advancing Automation (A3) said. “And as we’ve heard from our members and at shows such as Automate, these sales and shipments aren’t just to large, multinational companies anymore. Small and medium-sized companies are using robots to solve real-world challenges, which is helping them be more competitive on a global scale. (Source)

Across all sectors combined, shipments of robot freight increased by more than 15 percent besides the automotive industry which saw a decrease in robots purchased.

According to the report, the consumer goods division purchased a whopping number of almost 50 percent more robots in 2018 than in 2017, while life sciences saw an increase by a third.

This highlights what Activist Post and this writer has detailed consistently for months — that advancement in robotics and A.I. is taking jobs daily more and more, warning that robots would soon take human jobs, such as construction and farming robots, Angus and HRP-5P, being created to replace workers in the aforementioned industries.

Then there is Mujin, a start-up out of Tokyo University, which has developed artificially intelligent robots that can fully automate entire warehouses in China and is pushing for the tech in the U.S.

Already, Mujin has supplied manufacturer JD.com with warehouse bots to become the first fulfillment center with full automation and only five human workers to service the machines, as Activist Post reported last year.

Activist Post also reported that even finance wasn’t safe from the robot apocalypse. China Construction Bank (CCB) opened a Shanghai branch run entirely by robots in a testing phase for finance with little to no human involvement.

With robots like Atlas, Angus, HRP-5P and now robots made by Mujin threatening various industries, employment will become scarce for those of us with limited abilities in human flesh suits.

As this writer has written before on Steemit, we are shifting towards a working world with little or no humans, as automation and artificial intelligence begins to take over our jobs. It’s cheaper to hire a few robots which don’t need rest and benefits than to hire a few humans who need healthcare and retirement funds.

Doctors could also be replaced by surgeon bots. Although, robot surgery has already led to 144 deaths in 2015. Remember, robots malfunction. Robots are also coming for the tech industry and factory work as iPhone manufacturer Foxconn is replacing a massive 60,000 workers.

This is only the beginning of the robot apocalypse that will touch on every aspect of society by 2025 according to some estimates.

All this sets a potentially dangerous precedent. We already have a lack of work – what happens when the great robot apocalypse occurs? Things aren’t going to be pretty. With robots taking our jobs, who will afford these products? One potential solution is to shift away from a monetary economy and more towards a self-sustainable resource economy like the proposed  “Venus Project.”

Even fast food chains and restaurants in the past few years like McDonald’s have decided to experiment to see if they can replace workers with robots. While McDonald’s or any business isn’t going to replace workers overnight, the transition will happen quicker than a lot of people think.

All this highlights what Elon Musk has previously warned, that a universal basic income (UBI) — essentially free cash handouts — “will be necessary over time if (AI) artificial intelligence takes over most human jobs.” And that appears to happening faster and faster, as the report by RIA expressed.

If all that’s not enough, scientists at the University of Bergen, Norway proposed the incredibly Orwellian idea of inserting morals into A.I. code at the ACM conference in Hawaii on Artificial Intelligence, Ethics and Society stating that smart home assistant devices should snitch on their owners, Activist Post reported.

The type of society we are walking ourselves into would give George Orwell a conniption if he was still alive, and he is very likely right now rolling over in his grave as all this technology he wrote as science fiction is being pushed on humanity.