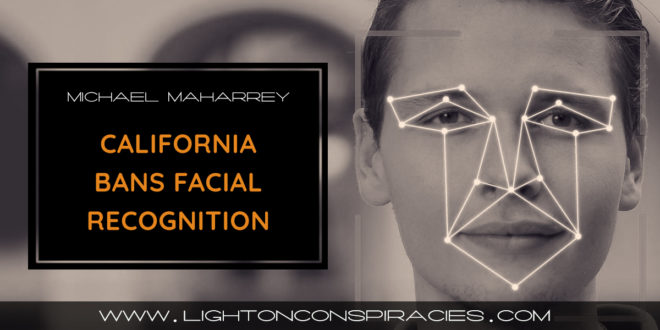 Yesterday, California Gov. Gavin Newsom signed a bill into law that bans police from using facial recognition and biometric scanners with body-worn cameras for the next three years. The law will not only help protect privacy in California, but it would also hinder one aspect of the federal surveillance state.

Before the final Senate vote, that chamber amended the bill twice to make the provisions temporary. With the initial amendment, the law would have been automatically repealed on Jan. 1, 2027. A second amendment whittled that backed to 2023. So in effect, AB1215 institutes a 3-year ban on facial recognition combined with body-worn cameras.

On May 9, the Assembly approved the measure by a vote of 45-17. The Senate passed AB1215 by a 22-15 vote over heavy opposition from police around the state. On Sept. 12, the Assembly concurred with the Senate amendment by a 47-21 margin. Only three Republicans in both the Assembly and the Senate voted yes on AB1215. With Gov. Newsom’s signature, the new law goes into effect on Jan. 1.

“Without my bill, face recognition technology can subject law-abiding citizens to perpetual police line-ups, as their every movement is tracked without consent. Its use, if left unchecked, undermines public trust in government institutions and unduly intrudes on one’s constitutional right to privacy. AB 1215 is an important civil rights measure that will prevent exploitation of vulnerable communities,” Ting wrote in a statement on his website.

Passage of this bill takes an important step forward but much work remains. When the provisions of the law sunset in three years, things will return to the status quo – which will mean police using facial recognition on body-cam footage whenever they please with no restrictions or oversight. It’s imperative to continue pushing legislators to make these restrictions permanent.

Powerful police lobbies opposed passage of the bill. According to USA Today, no law enforcement agency in California currently uses facial recognition with their body-worn cameras, but police opposed the measure because “a valuable tool could be lost.” Detective Lou Turriaga, director of the Los Angeles Police Protective League played the public safety card in opposing the bill.

“Facial recognition could be a valuable tool for us, helping identify felons or even abducted children, “he said. “I understand trying to seek a balance between civil liberties and law enforcement, but a wholesale ban doesn’t help us protect anybody. Why remove that tool from law enforcement? It just doesn’t make sense.”

A recent report revealed that the federal government has turned state drivers’ license photos into a giant facial recognition database, putting virtually every driver in America in a perpetual electronic police lineup. The revelations generated widespread outrage, but this story isn’t new. The federal government has been developing a massive, nationwide facial recognition system for years.

The FBI rolled out a nationwide facial-recognition program in the fall of 2014, with the goal of building a giant biometric database with pictures provided by the states and corporate friends.

In 2016, the Center on Privacy and Technology at Georgetown Law released “The Perpetual Lineup,” a massive report on law enforcement use of facial recognition technology in the U.S. You can read the complete report at perpetuallineup.org. The organization conducted a year-long investigation and collected more than 15,000 pages of documents through more than 100 public records requests. The report paints a disturbing picture of intense cooperation between the federal government, and state and local law enforcement to develop a massive facial recognition database.

“Face recognition is a powerful technology that requires strict oversight. But those controls, by and large, don’t exist today,” report co-author Clare Garvie said. “With only a few exceptions, there are no laws governing police use of the technology, no standards ensuring its accuracy, and no systems checking for bias. It’s a wild west.”

There are many technical and legal problems with facial recognition, including significant concerns about the accuracy of the technology, particularly when reading the facial features of minority populations. During a test run by the ACLU of Northern California, facial recognition misidentified 26 members of the California legislature as people in a database of arrest photos.

With facial recognition technology, police and other government officials have the capability to track individuals in real-time. These systems allow law enforcement agents to use video cameras and continually scan everybody who walks by. According to the report, several major police departments have expressed an interest in this type of real-time tracking. Documents revealed agencies in at least five major cities, including Los Angeles, either claimed to run real-time face recognition off of street cameras, bought technology with the capability, or expressed written interest in buying it.

In all likelihood, the federal government heavily involves itself in helping state and local agencies obtain this technology. The feds provide grant money to local law enforcement agencies for a vast array of surveillance gear, including ALPRs, stingray devices and drones. The federal government essentially encourages and funds a giant nationwide surveillance net and then taps into the information via fusion centers and the Information Sharing Environment (ISE).

Fusion centers were sold as a tool to combat terrorism, but that is not how they are being used. The ACLU pointed to a bipartisan congressional report to demonstrate the true nature of government fusion centers: “They haven’t contributed anything meaningful to counterterrorism efforts. Instead, they have largely served as police surveillance and information sharing nodes for law enforcement efforts targeting the frequent subjects of police attention: Black and brown people, immigrants, dissidents, and the poor.”

Fusion centers operate within the broader ISE. According to its website, the ISE “provides analysts, operators, and investigators with information needed to enhance national security. These analysts, operators, and investigators…have mission needs to collaborate and share information with each other and with private sector partners and our foreign allies.” In other words, ISE serves as a conduit for the sharing of information gathered without a warrant. Known ISE partners include the Office of Director of National Intelligence which oversees 17 federal agencies and organizations, including the NSA. ISE utilizes these partnerships to collect and share data on the millions of unwitting people they track.

In a nutshell, without state and local cooperation, the feds have a much more difficult time gathering information. Passage of AB1215 would eliminate one avenue for gathering facial recognition data. Simply put, data that doesn’t exist cannot be entered into federal databases.

Michael Maharrey [send him email] is the Communications Director for the Tenth Amendment Center, where this article first appeared. He proudly resides in the original home of the Principles of ’98 – Kentucky. See his blog archive here and his article archive here. He is the author of the book, Our Last Hope: Rediscovering the Lost Path to Liberty. You can visit his personal website at MichaelMaharrey.com and like him on Facebook HERE
Share
Previous Million Mask March: Anonymous Plans To Fight For The Internet, Freedom Of Speech And Press November 5th
Next Bad News From the EU: High Court Blesses Global Internet Content Takedown Order