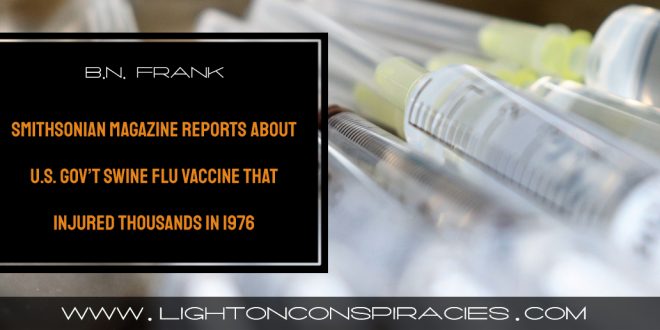 Since the 1980s, one U.S. government agency has paid over $4B to Americans who have been injured by vaccines. Wow, right?! CBS 60 Minutes produced a segment about one government campaign for a 1976 Swine Flu vaccine which harmed thousands of Americans who then sued for damages:

CBS ” 60 MINUTES” documentary on the swine flu epidemic of 1976 in the U.S. It went on air only once and was never shown again. Watch this video documentary and listen to testimony of people who caught Gullian-Barre paralysis because of the swine flu vaccine. They sued the US government for damages. 500 cases of Gullian-Barre paralysis, including 25 deaths—not due to the swine flu itself, but as a direct result of the vaccine. At the time President Gerald Ford, on advice from the CDC, called for vaccination of the ENTIRE population of the United States.

In 2017, Smithsonian Magazine published an article about the 1976 Swine Flu vaccine. Some might find it especially interesting that the aggressive campaign to quickly vaccinate the majority of Americans coincided with a presidential election.

The Long Shadow of the 1976 Swine Flu Vaccine ‘Fiasco’

Some, but not all, of the hesitance to embrace vaccines can be traced back to this event more than 40 years ago

In the spring of 1976, it looked like that year’s flu was the real thing. Spoiler alert: it wasn’t, and rushed response led to a medical debacle that hasn’t gone away.

“Some of the American public’s hesitance to embrace vaccines — the flu vaccine in particular — can be attributed to the long-lasting effects of a failed 1976 campaign to mass-vaccinate the public against a strain of the swine flu virus,” writes Rebecca Kreston for Discover. “This government-led campaign was widely viewed as a debacle and put an irreparable dent in future public health initiative, as well as negatively influenced the public’s perception of both the flu and the flu shot in this country.”

Flu-like symptoms and illnesses are also very common with Microwave Sickness, a federally recognized illness (see 1, 2) and Electromagnetic Sensitivity, a federal recognized disability (see 1, 2). In fact, many types of undesirable health conditions can be caused or worsened by exposure to Electromagnetic Radiation (EMR) aka “Electrosmog.” Sources include 5G, Bluetooth, cell phone and WiFi radiation and also “Energy-Saving” CFL and LED light bulbs.

For many years The World Health Organization (WHO) and other health experts (see 1, 2) have recommended that we reduce our exposure to wireless radiation because of increased cancer risk and more. Animals can be harmed by exposure too.

There are no vaccinations available for Microwave Sickness or Electromagnetic Sensitivity. The best defense is to reduce exposure to sources of “Electrosmog.” This includes having your utility companies replace their electric, gas, and/or water 2-way wireless transmitting “Smart” Meters (see 1, 2, 3, 4, 5) with traditional analog meters.

Eventually the Food and Drug Administration (FDA) will be asked to approve vaccines for the Corona Virus. The FDA track record for failing to protect Americans from harmful products is staggering – most recently with now 87 toxic and potentially deadly hand sanitizers. Experts and whistleblowers have also blamed the agency for significantly contributing to the Opioid Crisis.