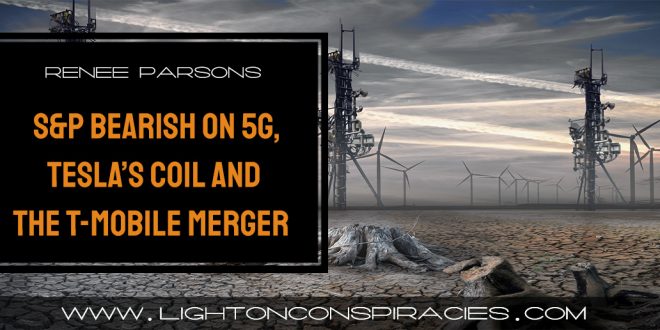 S&P Bearish on 5G, Tesla’s Coil and the T-Mobile Merger The FCC, the telecoms and cooperating MSM continue their resolute PR campaign to sell 5G to an unsuspecting American public as if the technology is up and running at effortless full capacity.  The truth is that even as ‘spotty’ coverage is being established in large urban markets, the telecoms are well aware that there are fundamental uncertainties yet to be addressed which may take years before widespread distribution can be accomplished.

The industry is driven by the hard reality that consumer indifference to increased data speed may be enough to threaten a return on their $275 billion investment thereby encouraging the telecoms to manufacture an insatiable demand for some new digital bells and whistles.  This is not to say that 5G is in jeopardy of being developed but that its cellular identity may be amended to focus more on the 30 GHz and higher projects.

The reality is, according to Scott Fulton, there is no single, simple way to create a new wireless technology on the scale of 5G.  Fulton compares the upgrade from 4G to 5G as akin to going from a telegraph to a fax machine.  As he explains, a wireless generation is a combination of technologies, all with multiple dimensions and differing standards, that must be integrated to form one mobile technological entity.  The 5G concept is not conducive to plugging one new generation into another but requires a level of co-existence as one merges with another, as new standards integrate with the old standards – all of which may take years.   As we know from the National Security Council power point, 5G is being built from the ground up as a brand new entity.

In other words, creating a new generation of digital technology is a lot more complicated with rollout not ready for some years to come, even as the push for 6G begins to muddy the waters.

In addition, a recent Standard and Poor’s Global Ratings gave credence to the possibility that the telecoms are taking on more than they are able to deliver:  “for U.S. telecommunications companies, we have a cautious view on 5G wireless.  We believe that accelerated deployments could hurt balance sheets that are already stretched because of mergers and acquisitions, mature industry conditions, and competitive pressures.”

In a warning to investors, S&P cited “revenue growth associated with 5G will be constrained” as they questioned whether consumers are willing to spend more just to experience faster speeds on new devices.  S&P continued “our forecast for 5G investment and customer appetite is bearish, so any incremental increase cost or delay should be nonmaterial to the ratings” and that “the bulk of the (Internet of Things) revenue opportunities may not materialize for at least five to 10 years”  as AT&T and Verizon could wait up to ten year for a pay back on their investment.

In 1891, the brilliant Nikola Tesla, Yugoslavian physicist, engineer and inventor created the Tesla Coil which became the first high voltage transmission of wireless electricity utilizing an electro magnetic force.  The Coil radiated sufficient volts of artificial lightening to illuminate a fluorescent bulb with no electrical wire connection as Tesla also dared theorize on the possibility of death rays.

Some believe that Tesla derived his genius from interstellar spheres as he once suggested that “if you want to find the secrets of the Universe, think in terms of energy frequency and vibration” while displaying an intuitive recognition of the existence of the ionosphere, a premonition of plasma as the fourth state of matter and what today has been dubbed ‘free’ energy.   More famous for revolutionizing our understanding of electricity with his patent for AC (alternating) current, his prescient quote  “…in the Universe there is a core from which we obtain knowledge, strength and inspiration.  I have not penetrated into the secrets of this core but I know that it exists” further suggests a consciousness that had penetrated a “secret core” as another level of reality.  Today, AC is also known as radio frequency waves in the telecommunication world with the difference being the level of frequency on the spectrum.

After having his inventions ridiculed, laughed at and/or stolen by Thomas Edison, Marconi, George Westinghouse and lastly, JP Morgan who failed to grasp the significance of a global wireless communication network, Tesla experienced how a small independent inventor could be squeezed out by the rapacious robber baron class which continues to this day.  After his death in 1943, some of his remaining paperwork was confiscated by the US government and some became enshrined in a museum in Yugoslavia.   As the spirit of Tesla lives on through ingenious inventors of the day, there is reportedly a way to connect an android phone to the internet without wifi service.

Speaking of robber barons, the recent Department of Justice approval of a $26 billion merger between T-Mobile and Sprint reduced four major national wireless carriers to three thus creating another impossibly unwieldy mega-monster titan while assuring that Rural America’s Digital Divide will continue.  In a late hour concession to rural consumers, one of the divestiture requirements included the sale of “certain spectrum assets,” 20,000 cell sites, retail storefronts and total use of the T-Mobile network for seven years to Dish, a Colorado-based satellite TV provider as it builds its own 5G network in the expectation of ultimately becoming a fourth major carrier.

With the ink barely dry, T-Mobile CEO John Legere wasted no time in asserting that T Mobile’s  acquisition of Spectrum would offer a “true nationwide capability that this country needs that nobody else has” and that owning all three frequency bands, each containing different properties and ability to transmit data, is crucial to 5G’s success.

Radio Frequency Spectrum is a fixed, finite resource on the electromagnetic spectrum that enables wireless telecommunication to function.   With a radio frequency from 3 KHz to 300 GHz (gigahertz), 5G will utilize low- and mid-band frequencies as well as the higher mm Wave frequency which is an essential indicator as to the true purpose and intent of 5G.

In other words, while T-Mobile has shrewdly accumulated all three bands to create what it believes will be unbeatable in the marketplace, AT&T and Verizon are no match for their market dominance.  Currently, both Verizon and AT&T own low-band spectrum and the more expensive and complex mmWave.  Neither owns any of the highly desirable, more versatile, mid-band spectrum necessary for urban and rural usage.

Legere then proceeded to attack the two remaining carriers as “dead in the water” and “lying”  as the merger put T-Mobile in the driver’s seat as Sprint was the only telecom to own any of the mid-band spectrum.  The merger gave T-Mobile the opportunity to consolidate all three bands under one company. In addition, at the recent FCC auction in March, T-Mobile spent $840 million to quadruple their mmWave holdings which will facilitate the Internet of Things, AI’s and the Directed Energy Weapons.

With three remaining carriers there is little real expectation that T-Mobile will live up to its earlier promises to provide rural America with cellular service and that 99% of the country will be wired within six years.  The cost for installing thousands of miles of fiber cable and 200,000-plus cell sites required to make a 5G network operational will be an extensive project and cost $60 billion more than proposed.  Still pending is S3157, the Streamline Small Cell Deployment Act which will curtail local government role in locating 5G towers.  If and when 5G makes it to rural America, it promises to be prohibitively expensive.

The last remaining requirement for the merger is final approval by the five-member Federal Communications Commission although their vote is little more than a technicality.  The three Republican appointees to the Commission announced their support, although two of them admitted they had not read the necessary documentation; thereby winning the “Bobbing Head Award of the Week.”

Renee Parsons has been a member of the ACLU’s Florida State Board of Directors and president of the ACLU Treasure Coast Chapter. She has been an elected public official in Colorado, an environmental lobbyist with Friends of the Earth and staff member of the US House of Representatives in Washington DC. She can be found on Twitter @reneedove31