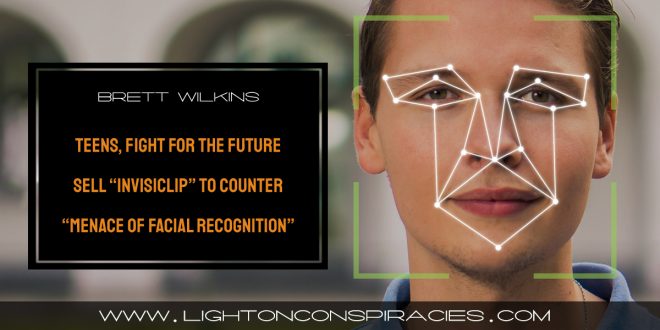 Teens, Fight for the Future Sell “Invisiclip” to Counter “Menace of Facial Recognition” In a bid to make anti-facial recognition technology “more discrete, more affordable, and more effective than any previous solution,” two self-described “high school scientists” have partnered with the digital rights group Fight for the Future to develop and market the Invisiclip, a small clip-on device that can easily attach to any pair of glasses or sunglasses.

Fight for the Future says Invisiclip—invented by high school seniors Evan Alfandre and Will McCormack—covers the wearer’s nose, is “minimally invasive,” and is effective against multiple facial recognition technologies.

McCormack told Fight for the Future that “the more that we learned about the dangers of facial recognition software, the more we desired to find a solution to the problem.”

“Initially, we just wanted to get an A on our project,” he added, “but when we realized we could really make a difference, our goals changed.”

“We found out that Fight for the Future is a leading activist group in this area,” said Alfandre, “so we connected with them in an effort to share ideas, publicize our invention, and keep people safe.”

Fight for the Future campaign director Caitlin Seeley George said that “when Will and Evan reached out to us, we were both impressed by their ingenuity, and also a little sad.”

“High school students shouldn’t have to worry about how surveillance technology is threatening their rights and their future,” she said. “I remember reading Nineteen Eighty-Four in high school, but kids these days are living it. That’s just wrong.”

Fight for the Future and the two teens produced a YouTube video to promote Invisiclip.

“If you have a driver’s license, a passport, or other form of government ID, in all likelihood the police have unrestricted access to your face,” the video notes, as do private companies like Clearview AI, which “scan the internet for photos of your face” and “have accumulated databases of over three billion photos.”

“We are looking to take on some of the world’s most powerful governments and reclaim our personal liberties by democratizing technology,” Alfandre says in the video.

Invisiclip is available for purchase for $25 on Fight for the Future’s online store. Glasses/sunglasses not included; results may vary.

“Partnering with Invisiclip is an opportunity to share this tool that people can use against facial recognition, and highlight why a ban on facial recognition is important for young people who don’t want a future where they’re under constant surveillance,” said Seeley George.