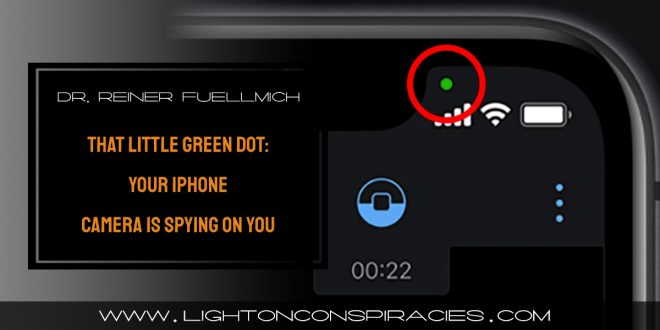 That Little Green Dot: Your iPhone Camera Is Spying On You Apple has rolled out with a new privacy protection feature on its iPhone, specifically with the new iOS 14 update, which many will welcome and consider crucial in the post Edward Snowden era, as well as the explosion of cases of unwanted corporate spying and tracking individuals for creepy product placement and data collection purposes.

The Apple update will make a little green dot appear anytime an app actively uses the iPhone’s camera, Apple recently indicated in a statement. And further a similar orange dot will appear anytime the microphone is activated.

“An indicator appears at the top of your screen whenever an app is using your microphone or camera,” Apple said. “And in Control Center, you can see if an app has used them recently.”

“Privacy is a fundamental human right and at the core of everything we do,” Apple explained, acknowledging the growing controversy and public outcry over apps that ‘spy’ on users without their known it, for example apps that gear adds based on the iPhone user’s vicinity to a particular store.

“That’s why with iOS 14, we’re giving you more control over the data you share and more transparency into how it’s used,” Apple said previously during the update rollout.

When users download new apps, it’s often buried in the fine print of ‘permissions’ that they access a user’s video and audio features, or it’s most often hardly disclosed at all.

Privacy activists have feared that for years such apps were already accessing iPhone cameras without users knowing about it, possibly also during very private moments. The Apple update can also allow users to disable apps’ ability to do that altogether, or examine a history of when video and audio were activated.

Facebook has also addressed recent controversy related to such unwanted snooping, denying that it regularly picks up users’ conversations for advertising purposes:

Many Facebook users say they’ve spoken about something out loud, only for related adverts to appear on the app soon after.

These users claim they’ve never searched for this sort of content before, and the only possible explanation is snooping.

Users reckon Facebook is using your phone’s microphone to listen in on real-world conversations – to help target ads. But is it true?

However, Facebook did acknowledge in a statement that “We only access your microphone if you have given our app permission and if you are actively using a specific feature that requires audio.”

But again it’s unclear how aware individual users are that they are granting such permission in the first place.

Recall that NSA whistleblower Edward Snowden went so far as to always put tape over his laptop camera or other devices which had camera or audio, given they were potential ‘snooping’ features that could also be used by government intelligence agencies. And no doubt now the ability for clandestine sweeping up of video and audio is even more advanced than when he first exposed sweeping NSA surveillance of the domestic populace on a massive scale over seven years ago.

The downloadable update iOS 14 is compatible with the following according to Apple’s website: