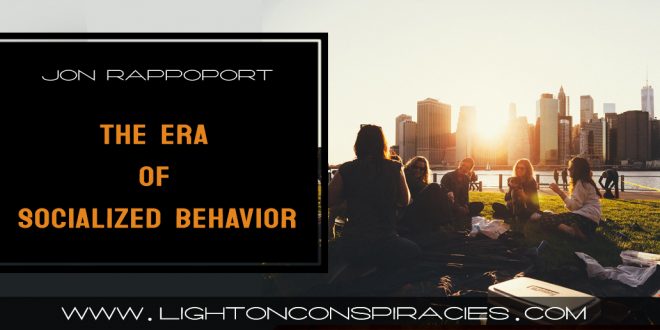 The era of socialized behavior

As a result of massive propaganda in ads, education, work-training, and other avenues of influence, people are pushed toward explaining their behavior according to certain acceptable clichés.

More and more people are explaining their values, goals, work, and relationships in the following terms:

“My parents were great teachers.” “My coach was like a second father.” “In school, I learned how to get along with others.” Etc., etc.

In general, people are explaining their actions in terms of their past history. “I do what I do now because of prior causes.”

This pattern may seem trivial, but it is profound in its effect. In a slippery fashion, responsibility is laid at the door of others. Not self. Rarely do you hear a person honestly say, I CREATE MY OWN FUTURE. Instead, as in soporific Academy Awards acceptance speeches, there is a long list of people to thank. All this is socialized behavior. Programmed. Taught.

It is a first cousin to: DON’T BE PROUD, BE HUMBLE.

Learned humility is socially approved of. In most cases, it isn’t real. It’s robotic. Most importantly, it is a barrier to realizing one’s own inventive power. It blots out that power and relegates it to a back bench.

DO YOU YOURSELF CREATE ANYTHING?

WELL, IN A CERTAIN SENSE I SUPPOSE I DO, BUT REALLY, IT ALL COMES FROM THE GREAT TEACHERS IN MY PAST. THAT’S WHERE I GREW. I WAS TAUGHT. IF IT WEREN’T FOR THOSE GREAT PEOPLE, I WOULDN’T BE HERE NOW. I’M NOT ACTUALLY CREATING ANYTHING, I’M RESPONDING TO PAST LESSONS.

Baloney. Thick slices of it. Every possible excuse to get out of admitting one’s own power is invoked.

Then we get something like this: THE UNIVERSE GIVES ME PERMISSION TO ACHIEVE WHAT I ACHIEVE. MY ACCOMPLISHMENTS WERE REALLY PROGRAMMED IN MY DNA, FROM THE BEGINNING. I HAD NOTHING TO DO WITH IT.

Over time, socialized behavior makes a person passive. In the core of his consciousness, he falls asleep. He goes into a coma. He still walks and talks, but the dynamic quality is gone.

What does all this add up to? It adds up to Collectivism emblazoned in the sky, like a giant billboard:

The individual is not really an individual. He is a Group, composed of “all the people that made him what he is today.”

And that, my friends, is the myth, story, and legend of the 20th and 21st centuries.

Jon Rappoport is the author of three explosive collections, THE MATRIX REVEALED, EXIT FROM THE MATRIX, and POWER OUTSIDE THE MATRIX, Jon was a candidate for a US Congressional seat in the 29thDistrict of California. He maintains a consulting practice for private clients, the purpose of which is the expansion of personal creative power. Nominated for a Pulitzer Prize, he has worked as an investigative reporter for 30 years, writing articles on politics, medicine, and health for CBS Healthwatch, LA Weekly, Spin Magazine, Stern, and other newspapers and magazines in the US and Europe. Jon has delivered lectures and seminars on global politics, health, logic, and creative power to audiences around the world. You can sign up for his free emails at NoMoreFakeNews.com or OutsideTheRealityMachine.