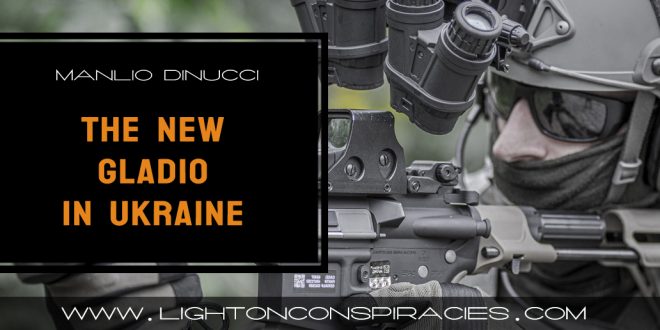 The new Gladio in Ukraine

Looking back to the coup in Kiev and the information provided in our columns during the course of the events, Manlio Dinucci describes a decades-old device used by the United States and NATO as it appears today: a new “Gladio,” that is to say a secret military structure capable of manipulating political facts.
To paraphrase a famous U.S. television series: “The Pentagon will deny all knowledge of your actions …”

His nom de guerre is Delta. He is one of the military leaders of the “Ukrainian revolution” even if, as he himself says, he does not consider himself Ukrainian. Under the helmet he wears a kippa. The story was released by the Jewish press agency JTA (headquartered in New York), after doing an anonymous interview and photographing him in camouflage with a bulletproof vest, his face hidden behind sunglasses and a black scarf. [1]

“Delta” is a former veteran of the Israeli army, who specialized in urban warfare as a member of the Givati infantry brigade, which was involved in Operation Cast Lead and other attacks on Gaza, including the massacre of civilians in the neighborhood of Tel el-Hawa. Back in Ukraine since a few years behind the guise of a businessman, he set up and trained, together with other former Israeli soldiers, the “Blue Helmets of Maidan”, a fighting unit applying in Kiev the same urban techniques that were experimented in Gaza.

As he told the JTA, his platoon takes its orders from Svoboda, that is to say a party that behind its new facade retains its neo-Nazi matrix. So as to reassure the Ukrainian Jews who rightfully feel threatened by the neo-Nazis, “Delta” insisted that the accusation of anti-Semitism levelled against Svoboda is “bullshit.”

The presence in Ukraine of Israeli military specialists is confirmed by the information relayed by the JTA and other Jewish news agencies, according to which many of the wounded in clashes with the Kiev police were immediately carried off to Israeli hospitals, evidently to prevent someone from revealing any more inconvenient truths. Such as the one about the people who trained and armed the snipers on Maidan Square who, with the same precision rifles, fired on both the protesters and police (almost all shot in the head).

These facts shed a new light on the way the coup in Kiev was organized and implemented. Under the direction of the United States and NATO, the CIA and other secret services have for years recruited, funded, trained and armed the neo-Nazi activists that in Kiev stormed government buildings, and were then made into the “national Guard.”

Photographic documentation, which has been circulating recently on the internet, shows young Ukrainian activists belonging to the neo-Nazi Uno-Unso organization, in Estonia in 2006, being trained by NATO instructors in urban warfare techniques and the use of explosives for sabotage and attacks [2] NATO did the same thing during the Cold War to form the clandestine “stay-behind” paramilitary structure, codenamed “Gladio” [3]. Active also in Italy where, at Camp Darby ( U.S. military base near Pisa ) and other sites, they trained neo-fascist groups to carry out attacks and perpetrate a possible coup d’état. An analogous paramilitary structure was created and is functioning today in Ukraine, also using Israeli specialists.

The coup would not have succeeded, however, if NATO had not co-opted a large part of the top echelons of the Ukrainian military hierarchy, training them for years at NATO’s Defense College and in drilling them in “peace operations.” And it is not difficult to imagine that, in the shadows of the official network, a secret one is lurking. Thus, the Ukrainian armed forces heeded NATO’s order to “remain neutral” while the coup was unfolding. Then, they were taken over by by Andriy Parubiy, co-founder of the National Socialist Party renamed Svoboda, who became secretary of the Committee of National Defense, and by Admiral Igor Tenjukh, appointed Defense Minister, who is also linked to Svoboda .

Without doubt, the purging (or elimination) of those officers considered to be unreliable is already in progress. While NATO, which has de facto annexed Ukraine, pronounced the referendum in Crimea “illegal and illegitimate .”

The Fear Virus Pandemic
“The Art of War”

The future of “America”, increasingly armed

China, and not only Iran, is targeted by the USA

What is the real nuclear threat in the Middle East?

To send a message
Original Article
Please take a moment to support Ole on Patreon!